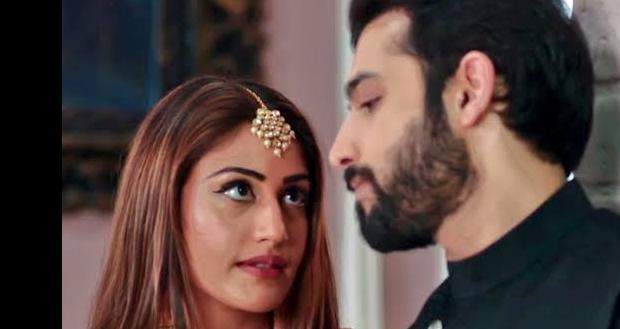 Today's Naagin 5 1 November 2020 episode updates start with Veer catching Bani at the main gate of his house. He forces her to get into the house and stops her from not meeting Jai.

He takes Bani to his room and gets surprised to see Meera wearing Bani’s dress. He asks Meera to go back home, while Meera advises Veer to not to force anything to get Bani’s love.

Veer challenges Bani that he will make sure she confesses her love for him. They both keep staring into each other’s eyes while recalling their past moments together.

Jai arrives there and asks Bani to come out to talk to him. Bani informs him about Veer’s challenge, while Jai asks her to bring Veer to the Sarpili Baarudi Surang.

Bani agrees with his plan and Jai mutters that it is his new plan against Bani and Veer. Later, Veer comes in front of Jai’s car and questions him why he didn’t tell Bani about his Cheel identity.

He warns Jai to forget Bani and to stay away from her. Jai starts laughing at him and Veer says that he knows his real intentions.

Further, Veer plans a romantic date for Bani and takes her to that place. He blows bubbles around Bani and she misunderstands him to be Shakura.

She starts panicking and Veer hugs her to calm her down. He gets emotional and says that he will never let anyone hurt her again.

Later, he offers a drink to Bani but she refuses by saying that she doesn’t drink. Veer tells her that it is pure water just like his love for her.

The next morning, Shakura gives a parcel to Bani on behalf of Jai. (tellybest naagin wu) Bani finds a pair of earrings and Jai informs her on the call that she can talk to him through those earrings.

Veer arrives there and asks Bani to come along with him to the jungle. Later, Veer stops the car in midway and confesses his love feelings to Bani.

He discloses his real identity and takes his Cheel form in front of her. Bani questions him why that place is so special for him.

Veer tells her about his childhood experience when he flew for the very first time. Elsewhere, Jai orders Mayuri to send Shukla to the Praag Pahaad.

Veer shows the Praag Pahaad to Bani and tells her that he used to practice his flying skills there.

He tells Bani that a plane crashed near that place and he saved a girl and a boy from falling down. Bani recalls that Veer saved her at that time and now she is going to be the reason for his death.

© Copyright tellybest.com, 2018, 2019, 2020. All Rights Reserved. Unauthorized use and/or duplication of this material without written permission from tellybest.com is strictly prohibited.
Cached Saved on: Saturday 5th of December 2020 04:16:43 AM