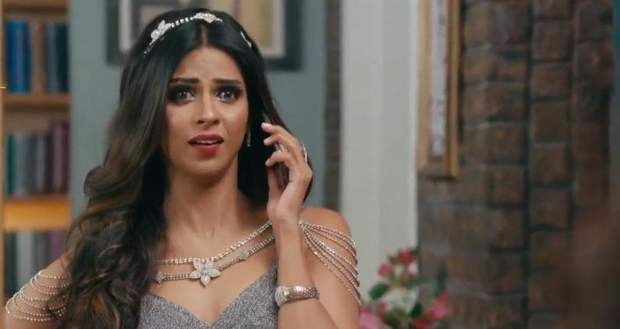 Today's Nagin 5 20 Sep 2020 episode starts with Veer locking Bani in the room and going out to party with his brothers. Bani releases herself by taking her Naagin avatar and goes to the party location.

Veer sits near the poolside and keeps on thinking about Bani. Meanwhile, Bani acts emotionally in front of Veer’s brothers and asks one of his brothers to give her company.

She takes him near the pool and plans to scare Pankaj by her Naagin avatar. Veer arrives there and questions Bani about her presence with his brother.

They both get into argument and Bani pushes Veer in the pool but falls down along with him. Elsewhere, Jai’s family asks the police officer to find Jai at the accident spot.

Bani goes to the accident spot at the mountain to find Jai. The next morning, some people push the unconscious Jai out of a van and a girl name Mayuri witnesses Jai lying on the ground.

Mayuri takes her beautiful peacock form and takes Jai with her, while Bani opens all the windows of Veer’s house in the daytime to get the sunlight inside the house.

Bani tries to create trouble for the Singhaniyas and asks everyone to clean the house. Meanwhile, Mayuri takes Jai to her house and orders, Bobby, to take care of Jai.

Shukla calls Mayuri and tells her to continue their plan of revealing Bani’s identity to Veer.

Veer arrives in the hall and laughs at his family members for doing the dusting work. (tellybest.com) Bani orders Veer to get clean water from the washroom and to help her in cleaning the house.

Mayuri enters the Singhaniya mansion and greets Veer's family. She makes fun of Bani and taunts Veer for getting married to Bani.

Bani gives an excellent answer to Mayuri’s taunting and makes her mouth shut. Veer gets impressed by Bani’s answers, while Bani shows Mayuri the guest room to live.

Later, Bani goes to the old temple and expresses to Lord Shiva that she feels there is a new enemy in Veer’s house.

The priest arrives in the temple and advises Bani to listen to her mind. Elsewhere, Mayuri enters Veer’s room and lies down with him on the bed.

Mayuri plans a party to execute her plan, while Veer tells Bani that his family has not killed Jai. Later, Mayuri gets some dresses for Bani and asks Sunny to assist her.

She mixes a pill into the water, while Veer gets a new dress for Bani but she doesn’t accept his choice of dress.

© Copyright tellybest.com, 2018, 2019, 2020. All Rights Reserved. Unauthorized use and/or duplication of this material without written permission from tellybest.com is strictly prohibited.
Cached Saved on: Saturday 5th of December 2020 04:27:01 AM