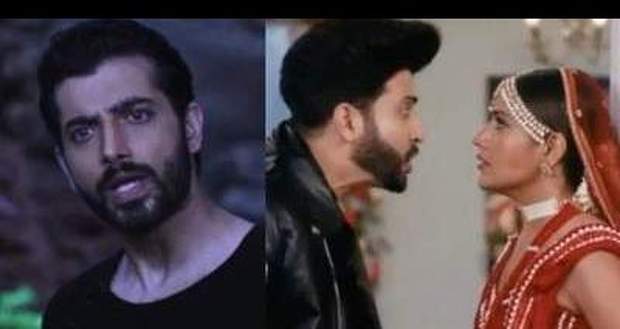 Today's Naagin 5 25 Oct 2020 episode starts with Bani getting forced to marry the second time. She jumps from the house placed in the clouds and believes in Shivji to save her.

The Gandhak Pathar saves Veer and he regains consciousness. Bani's dupatta gets stuck in the Trishool and she is saved from falling on the ground.

Meanwhile, Veer gains all his powers through the Gandhak Pathar and he witnesses Bani floating in the air.

He rushes to save her and pulls her Dupatta to free her. They both fall down on each other and Veer starts flirting with her.

Veer gets angry with Shakura for trying to flirt with Bani. Shakura warns him that Bani is going to be his wife and asks Veer to stay away from her.

They both get into a heated argument whereas Jai, Mayuri and Shukla get shocked to witness all this.

Shakura forces Bani to marry him and then attacks Veer in his Cheel avatar. Bani wonders why Veer is not fighting back in his Cheel form.

Veer gets injured and Shakura forcefully starts taking Phere with Bani. He tries to attack Veer with a burning rod while Veer staps the Trishool in Shakura’s stomach.

Shakura says to Bani that they both will unite soon and he dies after saying his last words.

Veer questions Bani that why she jumped from the house’s window. Bani tells him that she doesn’t want to marry Shakura.

Veer tells Bani that he knows she loves him and that’s why she was not able to marry Shakura with her consent.

Bani falls unconscious in his arms and Veer takes her to his home. (tellybest.com written update) Later, Bani wakes up in the bathtub and Veer comes there to apply ointment on her wounds.

Bani also applies the ointment on Veer’s wounds and asks him that what happened to him earlier. Veer asks Bani to give him a promise that she will never put her life in danger and she will never meet Jai.

Further, Bani informs Veer that there is a person locked inside the basement room. Veer doesn’t believe her whereas Balwant overhears their conversation.

He rushes to hide the locked room from Veer. Elsewhere, Veer arrives there and finds no locked room there.

He keeps the Gandhak Pathar inside the jewellery box and then Balwant questions him about his presence in the basement.

Bani picks Jai’s call and informs him about Shakura’s plan to marry her. Jai gets angry with her for losing her chance of killing Veer.

Veer sees the curtain removed from between the bedsides and tells Bani that she will definitely start feelings for him one day.

Upcoming Nagin 5 episode update: Jai to use Mayaavi Ras to trap Bani in his plan.

© Copyright tellybest.com, 2018, 2019, 2020. All Rights Reserved. Unauthorized use and/or duplication of this material without written permission from tellybest.com is strictly prohibited.
Cached Saved on: Thursday 3rd of December 2020 07:42:04 PM