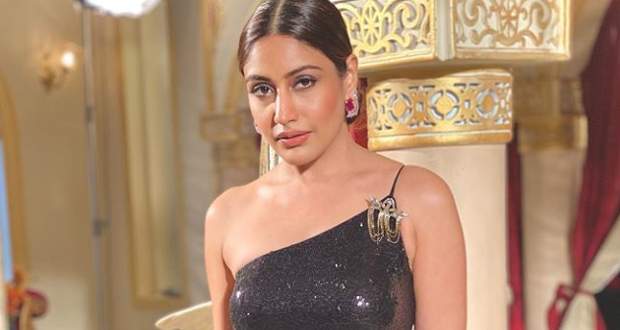 Today's Naagin 5 26 Sep episode starts with Jai frees himself from the ropes. Mayuri taunts Bani and asks her to drink water. She has made some plans and is waiting for Cheel and Adi Nagin fight.

Jai calls Bani while Bani acts of being unconscious in front of Mayuri. Mayuri brings Veer to the room while Bani accuses Sunny of harassing her. Sunny tries to reveal Mayuri’s truth but she covers up.

Jai escapes the room and reaches Bani and Veer’s reception party. He learns that Bani married Veer. Elsewhere, Shukla is attacked by Mayuri while he reminds her of their main motive.

Bani meets her family while Mayuri continues to spew hatred for Bani. Later, Bani touches Mayuri’s hand and sees a vision of a peacock and a snake.

Daksh harasses Meera and even tears her dress. Veer slaps Daksh and makes him apologize to Meera. Later, Jai shocks Bani and takes her in private to talk.

Jai reveals that he was saved by a net while Bani tells him she got married to Veer. She reveals her plan and Jai is ready to support her. Jai also wants to know who has kept him in the house and tried to kill him.

Bani learns that Mayuri is a Morni and takes Nagin avatar in front of her. They both get into a fight and later everyone comes out. They start fighting in the mud while Veer helps Bani get out of the mud.

Veer picks Bani in his arms and announces the party is over. (tellybest.com wu) Later, Veer and Bani get close as Veer applies ointment on her wounds. Mayuri witnesses Bani talking to Jai and threatens to reveal the truth. Bani also threatens to reveal her Morni truth.

Balwant doesn’t want Veer to be part of their business meeting while Bani decides to instigate Veer. She takes the trolley of food from Mayuri to serve. Bani brings food during the meeting and introduces herself.

She offers to mix orange juice and Vodka while Veer watches her every move. She decides to drink herself to instigate Veer. Elsewhere, Mayuri decides to use Naagfani against Veer and Bani.

Veer will get dangerous after taking Naagfani and will kill Bani. Meanwhile, Bani acts drunk and continues to spoil their meeting and starts dancing inappropriately.

Veer takes Bani along and is not mad at her. Mayuri puts Naagfani on Bani’s brooch while Veer exposes that Bani is not drunk. Bani instigates Veer but he not fazed and gets hurt by Bani’s brooch.