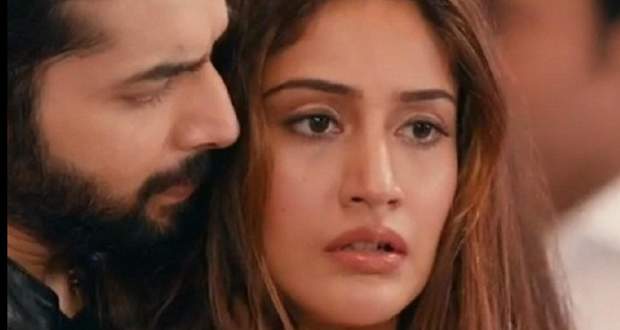 Today's Nagin 5 30 Aug episode starts with Jai asking Bani to hold his hand. Veer sees them together at the same place where his friends were killed.

He suspects Bani to be a Naagin and questions himself about his increasing attraction towards her, while Bani narrates her survival story to Jai. She tells Jai that she is an accident survivor as a plane crash took place when she was 4 years old, but she was the only one who survived the plane crash.

Jai gets shocked and tells Bani that he also survived the same plane crash. Veer takes his Cheel avatar and attacks Bani and Jai. Bani gets scared and runs from there, while Jai follows her and asks her to wait there until he gets the car.

She thanks the driver for coming, but the driver starts saying bad words about Jai. Bani gets shocked to see Veer at the driver seat and asks him to stop the car. Veer starts adoring her beauty and then drops her to Jai’s restaurant.

Jai welcomes Bani and introduces her as a manager to the staff. Later, Naina makes a call to Jai and asks him to give Bani’s contact number so that she could talk to her about something very important. Bani takes Jai’s phone and Naina asks her to meet her as soon as possible.

Veer arrives at Jai’s restaurant along with his friends, whereas Jai and Bani ask him to leave from there. Veer informs that the upper floor of the restaurant is sold to his company.

Later, Balwant arrives at the party, while Veer starts flirting with Bani, but she ignores him to the fullest. Jai asks Bani to relax and to take a break for some time.

Veer misbehaves with Bani, and Jai gets angry and asks Veer to back off. Bani decides to dance with Veer to know about the evil plans of the Singhaniyas.

Elsewhere, Balwant reveals to his brother that years ago he made a plane to crash to kill the Aadi Naagin, but the Naagin even survived that major plane crash.

Balwant gets worried that the Aadi Naagin would kill his son Veer so he asks his brother to find out the way to enter the ancient temple. Meanwhile, Bani and Veer dance together, and Bani feels a strange connection with Veer.