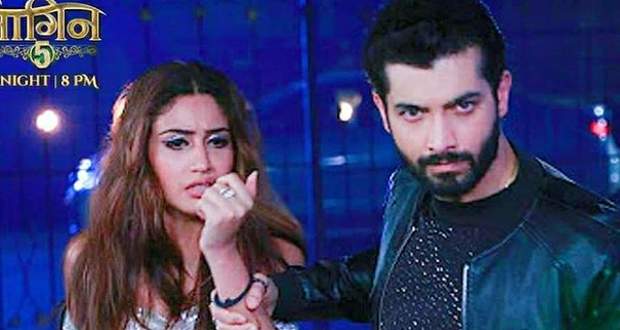 Today's Nagin 5 31 Oct episode starts with Veer feeling hurt by Bani’s words. He is sure that Bani will confess her love. Meanwhile, Jai puts a potion in the Singhania Swimming pool to control Bani.

Bani tries to control herself but gets hypnotized by the smell of the potion. Bani comes outside and Jai asks her to jump in the water.

He also gives her various instructions to test her control. Jai asks Bani to call Veer and get close to him. He further wants her to attack Veer.

Jai is about to drop Bani in the pool while Veer saves her. Jai instructs Bani to take the knife and threaten to hurt herself.

Veer tries to help Bani while Jai instigates Veer against Bani. Jai wants Bani to call her name and she asks Jai to stay. The magic of potion ends while Bani again tries to harm herself.

She thinks Veer is trying to harm her while Veer gets upset with her distrust. Meanwhile, Naag Jai attacks Ponky while Mayuri does the drama of saving him.

She further uses her magic to make Ponky forget all the events. Veer asks Bani to not go out of Singhania's house for the next 24 hours.

Bani calls Meera and asks for help from her. Later, Meera comes dressed as a belly dancer at Ponky’s bachelor party. Later, Shukla tells Mayuri that one of the dancers is Bani’s sister, Meera.

Bani dresses just like Meera and wants to sneak out of the house. Mayuri decides to help Bani and says she will dance.

Meera goes to Bani’s room and she asks her to wear her saree. Bani asks Meera to go take help from Veer if something happens.

Meera makes Bani realize that she trusts Veer and he has helped her before as well. Bani doesn’t listen to her and leaves the room.

Meanwhile, Mayuri distracts Veer so that Bani can leave the Singhania house. Jai is also happy with their successful plan. However, Veer catches Bani at the gate and confronts her.

Upcoming Naagin 5 episode update: Veer challenges Bani that she will declare her love within 24 hours.

© Copyright tellybest.com, 2018, 2019, 2020. All Rights Reserved. Unauthorized use and/or duplication of this material without written permission from tellybest.com is strictly prohibited.
Cached Saved on: Saturday 28th of November 2020 09:54:42 AM