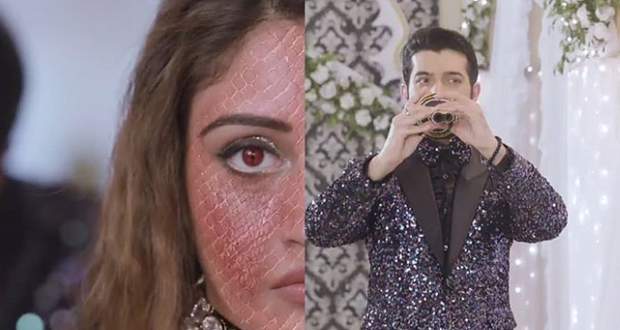 Today's Naagin 5 3 Oct episode starts with one of the priests finding that the head priest is dead. The wife of the priest uses a Dravya to find out the killer of her husband.

She learns that her husband was killed by Adi Naag Jai. The wife decides to tell Aadi Naagin the truth about Jai. Meanwhile, Mayuri is getting ready for engagement while Jai comes to the Singhania house.

Mayuri calls Jai and the phone is with Bani. Jai takes the phone from her and wishes to enter the house. Jai enters the party while Bani is scared that he will be exposed.

However, Bani learns that Jai has disguised as Mayuri. Bani and Veer spend some romantic moments and look into each other’s eyes. Further, Bani gets scared as Veer learns there is a Naag or Naagin in the house.

Daksh and Veer try to find the Naag or Naagin while Bani tries to save Jai. Bani picks the glass while at the same time, the real Mayuri is about to come downstairs.

Bani creates a plan and sends Jai while real Mayuri comes. Bani gets the engagement ceremony started while Veer watches her every move. (tellybest.com wu) Meanwhile, Jai plans to get Bani away from Veer so that he can take all her powers.

The family starts dancing while Veer and Bani also perform a sizzling dance. Veer takes Bani away from the party and gets close to her. Mayuri enters a room while Jai is present there and makes her unconscious.

Jai again disguises as Mayuri while Ponky continues to follow him. Meanwhile, Veer is suspicious of Bani and plays the Been to learn her real identity. Bani starts turning into a Naag but Bani controls herself from turning a Naag fully.

The sound of Been also affects Jai disguised as Mayuri. Veer is sure Bani is Naagin and wants her to take her original form. Veer is forced to stop as Jai attacks Ponky.

Jai as Mayuri acts as if she was sleeping in the room. Bani sends Veer outside the room while Jai takes his original form. Bani tells Jai that the Cheels are suspicious that some Naag is present. Bani further offers to support Jai.

Ponky is unconscious while Daksh can smell a Naag on him. Meanwhile, Bani realizes that she has not killed Teer as nobody learned her truth. Later, Jai overhears Bani’s confusion and makes a plan.

Jai disguises as Mayuri to trap Bani. Veer can smell Naag or Naagin while Mayuri tells him that she is wearing Bani’s saree.