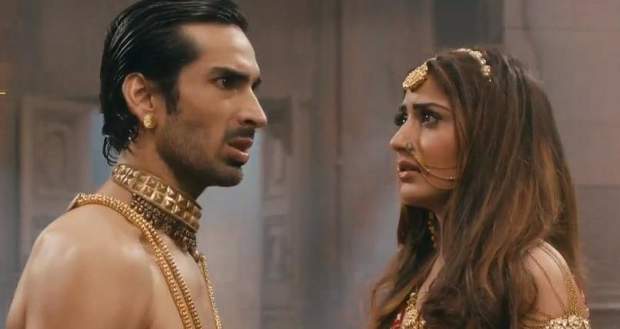 Bani goes to meet Veer and tells him that she will not let him marry Meera. Veer asks him to come inside his house, while Bani gets a vision of her previous life.

Balwant arrives there and asks Veer to stay away from Bani. Shukla informs Balwant that there was a bomb blast in the tempo and all the kidnapped girls are dead. Balwant gets happy and asks Shukla to find the Aadi Naagin.

Later, Jai comes to Veer’s house to find Bani. Bani touches her neck wound, while Jai holds Bani’s hand. Both of them get a vision of their past life.

Bani asks Jai to take her to the village which she saw in her vision. Jai and Bani leave from there, while Bani tells him that she feels very weird about thinking about the vision.

Bani and Jai meet an old man on their way and ask him about the village nearby. The old man tells them to follow the straight road to reach the ancient temple of that village. He touches Bani’s feet with respect and feels grateful to meet her.

Jai and Bani reach the place as guided by the old man, and witness the old temple there. They enter the temple holding each other’s hand, while Bani tells Jai that she came to that place before.

Bani and Jai decide to leave the temple, but the temple’s door gets shut by itself. Veer falls in front of the old temple in his Cheel avatar and gets unconscious.

Bani and Jai witness a magical light in the temple and find Lord Shiva in front of them. Bani informs Jai that she has to perform Tandav in front of Lord Shiva to solve the mystery of her life.

She turns into her Naagin avatar, while Jai gets shocked to see Bani as a Naagin. Bani performs Taandav to please Lord Shiva to solve the mystery of her life.

Later, Jai realizes his identity and turns into a Naag. Bani gets surprised to see Jai in his Naag avatar and they both start performing Tandav together.

Bani and Jai recall everything and call each other Naageshwari and Hriday. They both recall everything about their past life and decides to take their revenge from the Cheel Veer. (tellybest.com) Meanwhile, Veer gains consciousness and loses all his powers because of the sunlight.

Upcoming Naagin 5 episode update: Veer to recall his past life while Bani plans to take her revenge from Veer.

© Copyright tellybest.com, 2018, 2019, 2020. All Rights Reserved. Unauthorized use and/or duplication of this material without written permission from tellybest.com is strictly prohibited.
Cached Saved on: Wednesday 28th of October 2020 05:47:36 PM