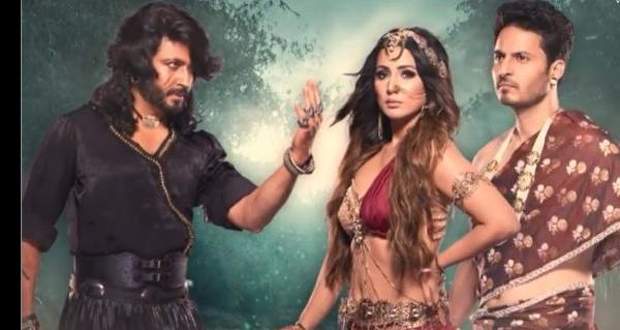 Today's Nagin 5 9 Aug episode starts with Brinda taking unconscious Dev at one corner of the ‘Purana Rahasya Mandir’ and lies him down as he is badly injured.

Meanwhile, Shalaka and Vishaka enters the temple to attack Brinda and take the Naagmani. They tell Brinda that Dev can only be saved by the ‘Raaz’ of the temple which has not been sought by any Naagin or human till now.

Shesha comes there to help Brinda know the truth, but the other two Naagins try to get Naagmani from Dev and attacked by Brinda to save Dev.

At the same time, Naag Rani Bela appears there and all the Naagins bow down to show respect to her. She takes out the Naagmani from Dev, while Vishaka attacks Shesha. She tries to defend herself and kills Shalaka.

Bela takes the form of Naagin and kills Vishaka whereas Dev dies and Bela tells Brinda that the secret of the temple will bring back the life of Dev.

She tells her that the most powerful Naagin, Sarvashresth Adi Naagin (Hina Khan) is the only one who can tell them the secret and can only be called by Lord Shiva.

Bela, Brinda, and Shesha perform Tandav to call Lord Shiva and to impress him.

Lord Shiva appears and says that he is impressed by Bela, Brinda, and Shesha and, therefore he performs Tandav to call Sarvashresth Adi Naagin.

He tells that Sarvashresth Adi Naagin can bring back Dev to life by narrating her story, but doing so will make her go through the pain of losing her love again.