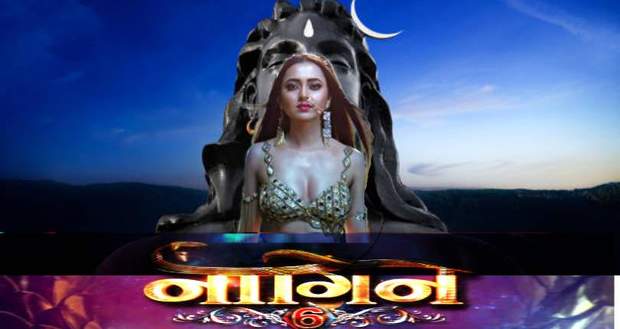 Today's Naagin 6 10th April 2022 starts with Rishabh storming off to his room in anger.

He is hurt by Pratha’s nonchalant way of confessing her feelings to him and later terming it as a joke.

Pratha confirms to Rishabh that she is married to him because she cares about money.

However, this is far from the truth and Rishabh needs to dig deeper if he wants to find out who Pratha really is.

Mahek asks Pratha whether she is in love with Rishabh or not.

Pratha looks at the ground and instead tells Mahek that Rishabh needs to move on.

However, Mahek is not convinced by her little sister’s lie and knows she cares for Rishabh deeply.

On the other hand, Rishabh is informed by his senior that two years back, a group of Indians attended a secret meeting in Chingistan.

It is in this meeting that they decided to sell Bharat by supporting Chingistan.

Pratha hears it and decides to kill the fifth Asura as soon as possible.

Pratha and Rishabh make each other jealous

The next morning at the breakfast table, Pratha acts very friendly with everyone.

Rihaan tells the whole family about his encounter with the Tiger.

Yet Rishabh cracks a joke about Rihaan’s ‘imagined’ courage.

Pratha tries to make Rishabh jealous by asking Yash what are his plans tonight.

Rishabh pulls the same trick and pretends to call Reem.

Later, Rihaan gets a call from the mastermind himself.

Rihaan is invited to a big party where there is an exhibition of a very precious diamond.

He asks Samaira to go with him. Rishabh and Pratha are both aware of the intent of this party.

An NRI by the name of Karan Mehra will be hosting this party.

Karan Mehra’s plan is to give this diamond to the Indian Government so he receives a big remuneration.

When Mahek sees the diamond, she tells Pratha that it resembles "Naag Mani" a lot.

At the party, Pratha bumps into Rishabh by mistake.

Rishabh eyes Pratha head to toe as if he wants to ravish her.

But when Rishabh spots Yash, he knows with whom she came.

Pratha then accuses Rishabh of having come to the party with Reem since he can’t meet her in front of Pratha.

Both the spouses get jealous to see each other with someone else yet both of them have a crucial role to play tonight.

When the clock hits twelve, all the lights would go off signaling the Sardar’s or the fifth Asura’s arrival at the party.

Both Pratha and Rishabh dance with Yash and Reem respectively.

Pratha does a seductive yet powerful solo dance too and when she is finished, the light goes off.

Mahek and Pratha gets fooled by Rihaan

Mahek and Pratha transform into their Naagin avatar while Rishabh catches a man hurrying to the exit wearing a cap.

Pratha and Mahek catch Karan Mehra but they soon realize he is just a pawn in the game.

The actual Sardar was with Rihaan during the party.

During the party, Rihaan was talking to the Sardar face to face about which Pratha had no clue.

However, the Sardar’s face matched perfectly with Pratha’s and Mahek’s father they lost years ago.

Pratha and Mahek thereby realize that they have been fooled.

Pratha and Mahek flee away from the spot when Rishabh comes out in search of Karan Mehra.

The issue of Sardar is closed for Rishabh yet Pratha and Mahek are zealous to reach him.

Just then, Pratha receives a call from Yash who asks where Rihaan is. Pratha asks Yash the same.

Yash answers that he heard Rihaan going near the Yamuna.

Mahek and Pratha arrive at the Yamuna too.

There they hear the screeching of numerous children stuck in a bus that was ordered to jump off the cliff and drown in the Yamuna by the Sardar.

However, with Lord Shiva’s blessings, Pratha and Mahek are able to save the bus.

Mahek seizes the driver and bites him.

Pratha then hears the screaming of two children who are hanging by the rocks.

She saves them and delivers them safely to their parents.

Pratha gets emotional when their parents pay their gratitude to Pratha.

The children’s father notices a strong formation of bubbles in the Yamuna River. Pratha’s eyes widen in fear of the mixing of the poison in the Yamuna.

Pratha and Mahek reunite with their father

When Pratha dives into the river, she discovers that it is her father who she lost years ago.

Pratha screams and drives her father’s body near the coast.

Mahek’s eyes widen in shock and they both try to revive him.

Pratha hurriedly makes a decision to carry their father to Gujral House.

When Mahek and Pratha arrive at the house, Seema questions their late arrival.

Radha eyes Pratha’s and Mahek’s father suspiciously and asks about his whereabouts.

Pratha unable to tell the truth lies that they saved the man from drowning and brought him home for his healing.

Radha makes a snarky comment about it which angers Pratha.

Pratha yells at Radha and Seema scolds Pratha for yelling at Radha.

Rishabh gets confused yet allows Pratha to take care of the man in front of Seema.

When they settle their father in a separate room with the help of Vihaan, Mahek holds Pratha’s shoulder.

Mahek asks her little sister to calm her emotions as they can’t let Gujral Household their family history.

Both the sisters cry remembering bits of their childhood.

With their estranged father now close to them, Mahek and Pratha resolve to find the fifth asura using all their might and force.

But do these emotive and powerful sisters know that their father has the potential to be the fifth Asura they have been looking for all the while?

According to the latest spoiler of Naagin Season 6, Pratha will talk to Mahek regarding the fifth Asura.

Pratha says that it is through Rehaan that they will get hold of the next Asura.

A person named Karan Mehra arrives when Pratha in her Naagin avatar asks him why was he trying to sell the country.

This is the same person whom Rehaan contacted before and asked to steal the diamond.

The person is later confronted by Pratha with her tail around his neck, almost killing him.

As per the spoilers of Naagin 6, Pratha later finds her father in the water after she finishes the person whom she considered the fifth Asura.

Is there any possibility that Pratha killed the wrong person in the name of killing Asura?

What connection does Pratha's father have with the Asuras as his unusual presence in the lake creates a lot of doubts?

Let us watch the future episodes of Naagin 6 to unveil the truth behind the fifth Asura.

To get to know more, download Naagin 6 all episodes or watch online today's (10 April 2022) latest full episode, go to voot.com