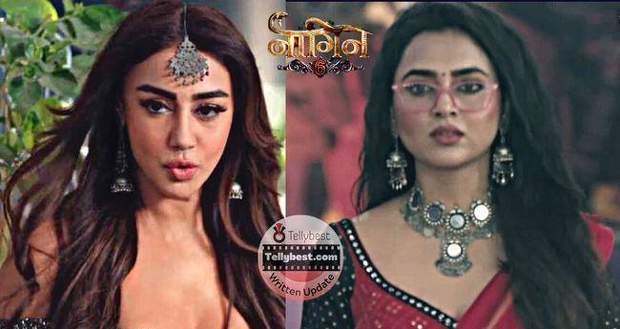 Today's Naagin 6 10th December 2022 episode starts with Mehek going to confront Prathna who is done with the Maha Shesh Naagin Puja and the establishment of nine naag manis inside of her belly.

Prarthana states that Pratha told her about how black her heart is but she sees the bloodied dagger in her aunt's hand & gets worried.

Prathna runs to see if Rudra, Pratha, and Rishabh are well or not.

She screams when she sees Rudra lying dead on the floor and Mehek taunts her that her lover is dead now and her parents are about to be dead too.

Prathna looks over at Pratha & Rishabh who ask Prathna not to hand over the Naag Manis to Mehak, no matter what does.

Rishabh tells his daughter that he is going to meet her along with Pratha when the sky becomes of 'Kesariya' color.

Memories of Pratha and Rishabh loving on Prathna move fast-forward in her head as tears form in her eyes and she loses consciousness at the extreme shock.

Mother Pratha Rises From The Dead!

With whatever energy is left inside of her, Pratha takes her Naagin form & burns Urvashi alive, vowing to protect Prathna as long as she is alive.

She then puts her healing hand on Prathna's forehead and makes her come awake and hugs her.

Prathna cries as Pratha dies in front of her, however, she sits up and takes Nagin Avatar to destroy the two enemies still standing alive in front of her.

Prarthana lifts Meheck up with her serpent tail but Meheck laughs at her, saying what she will do now since all her loved ones are dead.

Prarthana creates dust in the hall and leaves there while Rudra is still alive and staggers upstairs to save himself.

Unfortunately, he gets caught by Mehek who pushes another dagger into his chest, making Prathna shriek in pain as she sees him die.

Prathna takes PraRish bodies, along with Rudra's to give them proper funeral rites.

Just then, Meheck joins her and asks to stop all this emotional drama.

However, Prarthana has already made up her mind to live under the Earth and settles there without giving the Naag Mani to anyone.

Six years pass by and Meheck gets shocked to see Prathna enter Gujral Mansion to take her life.

Meheck wakes up after she realizes this is a nightmare as her fiance who runs the Ahlawat Jewellery business comes to comfort her.

Looking into his eyes, she instructs him to go to the office as she can command anyone with the power of the anklets.

In the afternoon, Meheck goes into deep thought where she hallucinates an old Mehek taunting the present Meheck about how much longer she is going to hide her old skin since the anklets have started to rust.

Mehek Is A Corpse

The hallucinatory old Meheck challenges the present one, saying she deserves to live in Hell and not live because she is still going on due to the longevity of the anklets, not because she is actually alive.

Meheck then takes Seema to the spot where Prarthana buried herself and starts digging there.

Meanwhile, a group of kids gathers kachoris to wish their favorite Didi a happy birthday.

It turns out that their favorite Didi is Prarthana who is now a part of their family and loves the kids as if they are her siblings.

Now, Prarthana doesn't remember her past at all and the kids, including the older one named Gautam, call her Preeti Didi.

After celebrating Preeti (Prathna's) birthday, they all talk about Omkar Chacha who saved Prathna six years ago, and whose photograph is hung on the wall.

Maha Shesh Naagin Forgets About Her Past

The kids reveal that Omkar was in the auto with them when he saw Prarthana & saved her on a dark night.

Preeti says that she owes her life to him while her foster kids say that Omkar had a big heart because he gave orphans like them a place to stay.

Prathna (Preeti) internally asks Lord Shiva who she is & what is her destiny as she doesn't remember anything from the past.

Gautam asks Preeti where they will stay now since they haven't paid the rent in three months.

Preeti (Prarthana) says she will manage somehow by getting a job or will talk to the Ahlawat Jeweller herself as he wants to buy this house.

In the upcoming story of Naagin 6 on 10th December 2022, Prathna as Shesh Maha Naagin decides to bury herself under the Earth, preserving the cosmic powers she was endowed with by Lord Shiva.

So far in the story of Naagin 6, Mehak makes a comeback and kills Pratha, and Rishabh, while Seema kills Rudra with the help of Urvashi.

Everyone who is dear & close to Prathna dies while she finishes the puja of worshipping the nine Naag Manis with King Takshaka inside the room Shakti was kept hostage for years.

However, as per the latest spoiler of Naagin 6, Prathna loses her mind after seeing her parents (PraRish) dead along with her lover, Rudra.

She finishes their last rites alone while their bodies burn.

Prathna sees Rishabh come to her and say he will meet her one day along with Pratha as their silhouette vanishes.

Prathna cries as Rudra's body burns and his silhouette also fades away.

As per the upcoming TWIST of Naagin 6, Mehek & Seema get concerned when Prathna decides to settle inside the Earth as she has no desire to live further.

Let us see what the new track of Naagin 6 brings to Prathna's story as she is left all alone in the future episodes of Naagin 6.