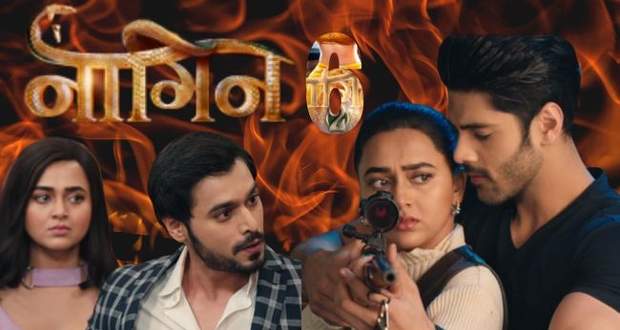 Today’s Naagin 6 10th July 2022 episode starts with Rehan seeing Samaira’s reflection in the mirror dressed up as a bride.

Samaira asks Rehan to go downstairs and she won’t even touch him. Rehan gets terrified as Samaira slowly starts floating in the air.

Frazzled Rehan leaves the room and collides with Urvashi who asks him the reason behind his state.

When Rehan tells Urvashi that he has seen Samaira, she threatens him not to mess up the engagement due to his stupid and nonsensical chatter.

Further, Divya and Kiara come to the party, and Rishabh’s eyes didn’t falter from Kiara.

Kiara catches everybody’s attention as she narrates the news of a serial killer roaming in the city who kills all the girls who cheat on their boyfriends.

Rishabh and Rajesh read the article that Kiara shows to them in the newspaper.

As all the people present start enjoying their time, Divya indulges Vihaan in a conversation with her while having shots.

At the same time, Vihaan receives a call from Rocky, whom he owes money. Vihaan excuses himself from Divya but she stops him saying that she loves him.

Vihaan thinks of it as a great opportunity as Divya confesses her feelings for him. He lies to Divya that he also likes her and wants to marry her.

Divya pulls Vihaan to a more isolated area where Vihaan asks her to break things off with Rehan and tell him that she is not in love with him.

Pratha hideously records Vihaan in a video and sends it to Rehan.

Vihaan is in trouble

Vihaan again receives the call from Rocky who asks him to come to the betting place if he doesn’t have money.

Later, Vihaan reaches the underground betting place where Rocky asks for his money for all the deeds he helped Vihaan in.

At the start, Vihaan receives punches from Monty, however, Vihaan turns the position in a split second and establishes victory over Monty.

Rocky and Monty get astonished at how Vihaan was able to win.

At that moment, Pratha reveals her Naagin form to both of them and encircles her serpentine tail around them.

Revolving them in the air with her tail, Pratha throws them out of the wrestling ring and they die on the spot.

Further, Vihaan arrives at the place, while Pratha disguises herself as Divya. Divya tells Vihaan that she has paid off his debt and apologies for not taking a stand for him before the family.

Vihaan notices Rocky and Monty lying lifeless on the floor and asks Divya who she is.

Pratha comes to her Naagin form again which shocks Vihaan.

Vihaan apologizes to Pratha as she captures him in her serpentine, however, Pratha tells him that the time has come that he pays off for his sins.

Pratha directs her magical powers at Vihaan’s throat till he inhales his last breath and thereafter drops him to the ground.

Rajesh introduces Kiara while Divya introduces Rehan as their fiancee to Mukesh.

Meanwhile, Rehan doubts Divya’s intentions of marrying him and discusses it with Ritesh who tells him that it doesn’t matter as he is marrying Divya only for money.

Rajesh’s friend and brother discuss the serial killer in the city.

On the other hand, Urvashi goes to give Shakti his food and Pratha moves to follow her.

However, Pratha’s foot slips and Rishabh catches her in time before she falls to the ground.

Rishabh stares into Pratha’s eyes while she does the same and the two get lost in their loving past memories.

The moment gets interrupted by Rajesh and both of them come back to reality.

Meanwhile, Shakti is completely spellbound by Pratha’s beauty and desires her to be with him.

Dreaming of Pratha in his dream as an ‘Apsara’ Shakti enjoys his time with Pratha being cozy with her.

At the same time, Urvashi comes there with food and shakes Shakti out of his dream due to which he gets angry at her.

On the other hand, Mehek catches Kiara staring at Rishabh adoringly.

To know her real truth, Mehek bribes a waiter to give Kiara drugged juice.

Intoxicated, Kiara trips into Rishabh's room and Rishabh catches her again in his arms.

Kiara demands to go outside for a walk while Rishabh suggests that it is not safe for her as a serial killer is roaming out in open.

Rishabh states that the killer is killing all the women who cheat on their boyfriends at which Kiara gets offended and says that men are the traitors.

The two banter on the topic back and forth which leads to Rishabh confessing that his ex-wife cheated on him with someone else before his eyes.

Meanwhile, Mehek is eavesdropping on their conversation and her eyes get widened seeing the two of them.

On the other hand, Pratha contradicts Rishabh upon hearing the allegations against herself and tells him that he is lying.

Rishabh questions how she knows about this and she gets shocked.

At the same time, Rajesh comes being her savior and tells Rishabh that he told Kiara about Pratha.

As Rishabh leaves, Rajesh tells Pratha that she is still in love with Rishabh, and Rishabh also loves her.

In the upcoming story of the serial Naagin 6 on 10th July 2022, Pratha will avenge her first enemy who conspired against her.

So far in the story of Naagin Season 6, Shakti has managed to come out of his room at the engagement party without being caught by Mehek or Urvashi.

Kiara dances at the party and Shakti is mesmerized by her charm and beauty.

As per the latest spoilers of Naagin 6, during the party Pratha, disguised as Divya, will lead Vihaan away from the party to an isolated room.

Vihaan will follow Pratha cluelessly to the room where she will reveal her real identity to him.

Pratha will declare to a frightened Vihaan that she will avenge him for all the sins he has committed, for all the injustices he had done with Samaira, Diya, and her.

Let’s watch if Pratha successfully avenges her first enemy or will Mehek who has her eyes on Pratha, comes to save Vihaan in the future episodes of Naagin 6.

Moreover, with Shakti out in open, has the danger increased for Pratha, or is some great opportunity awaiting her?