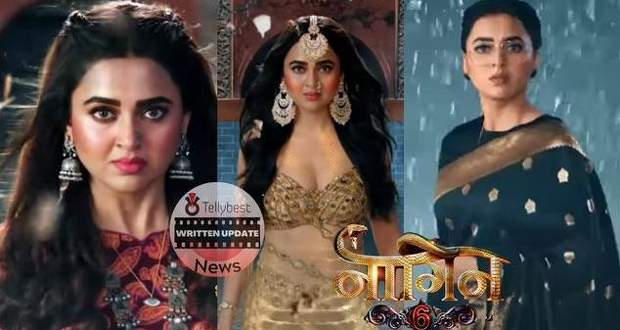 Today's Naagin 6 10th September 2022 episode starts with Pratha waking up from a nightmare.

Anmol and Rishabh laugh when they see Pratha wake up so scared. Anmol says it is midnight and they are here to wake Pratha up from sleep.

Pratha realizes it is Anmol’s birthday and she rushes both Anmol and Rishabh downstairs.

While Anmol treads, Rishabh makes fun of his Pratha saying she looks cute when she is scared while Pratha tells Rishabh she has never seen a father so possessive.

Anmol makes a wish after blowing the candle and takes blessings from Chanda and Lalit.

She then goes to fetch her phone but she ends up seeing a big, silver snake and screams her lungs off.

Pratha and Rishabh rush to Anmol’s room while Anmol tells them to be careful since the snake was so big.

Pratha tells everyone to gather downstairs and goes outside herself since she sees the snake as a messenger of Naga Raj.

Farishta comes to meet Pratha and says Naga Raj has gone in service of Lord Vishnu and Goddess Laxmi leaving him here.

He also reminds Pratha that his daughter will become Shesh Naagin now since she is twenty years of age.

Pratha gets angry and tells Farishta she will never let her daughter become Shesh Naagin.

However, Farishta says Raja Takshaka will come and coronate Pratha’s daughter as the next Shesh Naagin and Pratha’s presence would be necessary.

Elsewhere, Professor and Prarthna look for an auto as they come down from the bus.

The Professor celebrates Prarthna’s birthday at a tea stall while a woman screams asking for help to rescue her son from a big snake.

Prarthna runs and grabs the child while the snake bows down in front of her.

Professor gets alert and scolds Prarthna for doing so.

Meanwhile, at Gujral House, Anmol tells Pratha she is irritated since Rudra, her childhood best friend has not called her and she expects a marriage proposal from him.

When Anmol leaves the kitchen, Rishabh comes and tells Pratha he doesn’t like Rudra at all and has his gun ready if he makes Anmol sees idle marriage dreams.

Pratha asks Rishabh to chill since they also acted mad in love at one point.

Rishabh looks at Pratha lovingly and says it is almost a miracle that Pratha hasn’t aged at all, making her stiffen.

In her room, Pratha looks at herself in front of the mirror and says she is Shesh Naagin and will never age.

She has to keep herself as a human to live normally.

On the other hand, Professor and Prarthna have tea together and they moved to Badarpur all of a sudden.

Professor says he wants Prarthna to have better opportunities in a city.

Prarthna laughs and says Badarpur welcomed them uniquely since the snake didn’t bite her and bowed down respectfully.

Asurs are planning an attack on Bharat

Later, Professor locks himself in a room and places his study table and an Indian map against the wall.

He speaks of Bharat receiving another attack from an enemy clan and predicts it to happen on 10th September.

In the afternoon, Professor and Prarthna go out for a shopping stroll and he notices how she skips buying expensive things and go for cheaper stuff.

Professor feels bad for a while, saying maybe he could not give the lifestyle Prarthna was destined for.

All of a sudden, a swarm of bees attacks the streets, making Professor alert.

People start running here and there and in the middle of this chaos, Prarthna comes in front of a car.

However, her one touch stops the speeding car while a handsome man can be seen rescuing a boy from the bees.

Prarthna gets mind boggled when she realizes she stopped the car with one hand.

In the upcoming story of Naagin 6 on 10th September 2022, Pratha will be constantly having nightmares about Anmol becoming a Shesh Naagin.

However, she is oblivious that Anmol is not her biological daughter but it is Prathna who is being raised by Seema's Mother who is an Asura.

According to the latest spoiler of Naagin 6, Prathna is seen rescuing a boy who has fallen on the road from a snake.

Prathna will save the boy without getting harmed by the poisonous snake.

As per the upcoming twist of Nagin 6, the only difference between Pratha and Prathna's facial structure is that Prathna wears spectacles.

What will happen when this mother and daughter duo comes face-to-face?

How will Pratha react when she realizes her daughter whom she wished never to be a Shesh Naagin is going to become one at the age of twenty-one years old?

Let us see how this mystery is solved by Pratha in future episodes of Naagin 6.

© Copyright tellybest.com, 2020, 2021. All Rights Reserved. Unauthorized use and/or duplication of any material from tellybest.com without written permission is strictly prohibited.
Cached Saved on: Saturday 1st of October 2022 09:01:28 PMCached Disp on: Monday 3rd of October 2022 08:22:06 PM