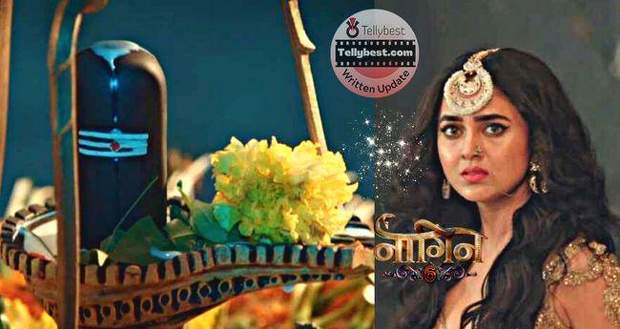 Today's Naagin 6 11th December 2022 episode starts with Mehek telling Seema that the rare red moon night is coming very soon and she will find Prarthana’s body along with Nine Naagmani.

When Seema tells Mehek that Prarthna must have entered Naag Lok after her death, angry Meheck orders Seema to watch the laborers as they bring out Prathna’s body.

In the Naagmahal, King Takshak announces that the time has come to protect Prarthana’s soulmate.

He even recalls how Prathna has taken this promise from him forcefully and adds that even though Prathna does not remember her destiny, it is still waiting for her.

The next morning, Mr. Raghubir meets a businessman who offers him a rare red diamond but Raghubir, a famous jeweler announces this diamond may be expensive but it is not a red diamond.

The businessman then informs Raghubir that he was just testing him and when Raghubir turns to leave, he is attacked by some goons.

Raghubir beats the goons very easily and walks away.

Later, Prarthana is walking in the rain while telling her foster sibling that the shop is not hiring right now.

On the other hand, Raghu’s car stops in the middle of the road, and when he comes out of the car to repair it heavy rain start pouring.

Preeti who is also walking on the footpath notices Raghubir and offers him an umbrella while the “Ek Ajnabi Hasseena Se” song plays in the background.

However, before Raghubir can see her, Preeti walks away and Raghubir calls Preeti Miss. Ajnabi Haseena.

Elsewhere, Mehek and Seema get tired when they don’t find Prathna’s body even after a lot of digging.

Meanwhile, Preeti gets worried when she finds less money in her wallet after her siblings are done with their breakfast.

Afterward, while Preeti and her foster siblings are walking on the road, they notice Mehek’s face on a big poster and Preeti mumbles Mehek does not have a heart.

Gautam questions Preeti if she knows this girl and Preeti replies negatively but the little foster girl urges Preeti to accompany them to the Ahlawat jewelry shop so they can see how a necklace look on Preeti and Preeti reluctantly agrees.

Meanwhile, the little girl urges Preeti to try a new necklace, and while Preeti is trying it, Raghubir is descending the stairs.

The Ajnabi song plays in the background when his eyes fall on Preeti anew and his heart skips a beat.

However, the little girl runs out of the shop and Preeti runs after her.

Preeti notices a car fast approaching the little girl and unknowingly she saves her foster sister in a lightning speed with the help of her Naagin powers.

Raghubir who thinks Preeti has stolen the necklace arrives there while Preeti is thinking about her action.

Looking at Preeti’s face, Raghubir again feels drawn toward her, and he calls Preeti a thief.

Preeti yells at Raghubir for calling her a thief but Raghubir points out the necklace causing Preeti to fall silent.

She hands Raghubir the necklace and walks away.

Mehek’s original self makes an appearance

Later in Gujral mansion, a lady servant shows Meheck a big gift box that someone has gifted her.

When Mehek opens the gift, she lets out a terrified scream seeing her wrinkled old shelf in the mirror.

The maid who was standing right there runs out of the mansion terrified and Seema orders Mehek to deal with the mess now.

Mehek arrives in front of the maid by taking Vinay’s appearance and when the maid informs Vinay about what she saw, Mehek transforms herself into Naagin and makes the maid kill herself with a knife.

Later, Raghubir and Vinay arrive at the Gujral mansion and Mehek reminds Vinay that they can transform the Faridabad property into a big jewelry shop.

Vinay informs Mehek that Raghu is the owner of the house so it should be his decision.

Mehek hypnotizes Vinay when with her eyes when Raghubir tells her he will do whatever his elder brother wants and Vinay orders Raghubir to transform the house into a jewelry shop.

Vinay comes back to his own shelf at the same time and Raghubir announces he will send the court orders.

Vinay then questions Raghubir if he really wants to do this and Raghubir replies positively.

Later that night, Preeti gets shocked to see the court notice and informs her foster siblings that she will talk to Mr. Ahlawat.

On the other hand, Mehek shows Seema, Prarthana's dead skin which she has stolen with a smug smile.

Mehek further adds that this dead skin will glow wherever it comes near Prathna and it suddenly starts to glow.

Noticing the glow, Mehek informs Seema that Prathna must be somewhere close now.

Meanwhile, Preeti arrives at the entrance of the Gujral mansion and feels she knows this place.

On the other hand, Vinay informs Meheck that today they will launch their new necklace line during the party.

When Preeti enters the house, a servant orders her to put a mask on, and while masked Preeti is walking in the hall, she collides with masked Meheck who is unable to recognize her.

On one hand, Mehek introduces the new necklace to the guests; on the other hand, Preeti is walking into the mansion while getting hazy flashbacks.

Meanwhile, Mehek gives a dance performance with her husband Vinay but Seema drags her away as Mehek needs to find Prathna instead of dancing to the Thumkeshwari song.

On the other hand, Preeti comes close to Rishabh's room and when she touches the lock, she hears someone screaming in her head and she pushes the lock away, feeling terrified.

Preeti then tries to peek into the room while she gets the hazy flashback of Meheck killing Rishabh.

Raghubir catches Preeti in his arms

Meanwhile, Meheck notices Prathna walking on the balcony and runs to check but ends up falling near the stairs causing one of the anklets to come out.

Seema arrives there and gives Meheck her anklet back while scolding her for not being careful.

On the other hand, when confused Preeti is walking out of the Gujral mansion, she collides with Raghubir.

Preeti is about to fall but Raghubir catches her in his arms and they get lost in each other eyes.

In the upcoming story of Naagin 6 on 11th December 2022, Prarthana is living a new life as Preeti, an orphan, with foster siblings to take care of after she loses her memories.

So far in the story of Naagin 6, Pratha & Rishabh die along with Rudra. Meanwhile, Prarthana decides to bury herself under the Earth and burn in the flames of revenge, not giving the Naag Mani to Meheck or Seema under any circumstance.

However, she gets saved by a good man named Omkar who adopts her as his daughter and a leap of six years is shown in this supernatural series.

According to the latest spoiler of Naagin 6, Meheck is now living in the Gujral House with a wealthy man who runs a jewelry empire by the name of the Ahlawat.

He is the same person who wants to purchase the house Prarthana (Preeti) & her siblings are living in.

As per the upcoming TWIST of Naagin 6, King Takshaka also reveals that it is time for him to fulfill the wish forcefully asked by Prarthana, which was to safeguard her love, but Rudra is dead.

A new character who is going to play Prathna's love interest will enter the show while she re-enters the Gujral Mansion to talk to the Ahlawat businessman without remembering Meheck or her painful past.

Let us see how this post-leap track of Naagin 6 brings to the table in future episodes as PraRish left a wide gap in the story of the show.

© Copyright tellybest.com, 2022, 2023. All Rights Reserved. Unauthorized use and/or duplication of any material from tellybest.com without written permission is strictly prohibited.
Cached Saved on: Wednesday 25th of January 2023 11:23:52 AMCached Disp on: Sunday 5th of February 2023 02:52:15 AM