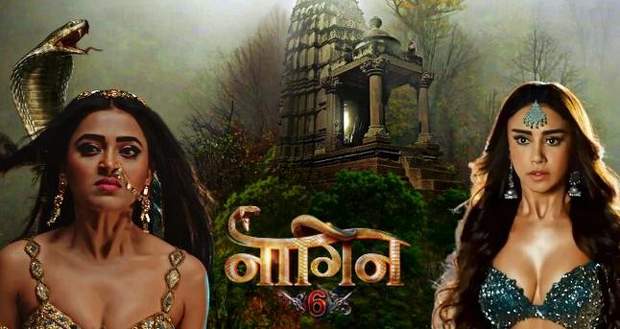 As there is no one to pay last respects to her dead body, the police force carries out Pratha’s last rites.

He looks up at the sky and apologizes to Pratha for not being able to save her.

He also cannot believe the woman he loved, that is Mehek, could betray her own sister like that.

Mehek to be the next Shesh Naagin

On the other hand, Mehek goes to the Naag Mahal to be the next Shesh Naagin.

A series of dialogue occurs as she invokes all the great serpents of Naag Lok to bless her with Shesh Naagin’s status.

However, a voice inside the Naag Lok reprimands Mehek, saying she cannot be the Shesh Naagin as she betrayed her own sister, Pratha.

Mehek gets angry and demands an answer for all the years she lost while she was being trained to become a Shesh Naagin.

There is another condition for Mehek to be Shesh Naagin and to fulfill it, she needs to have someone from her clan.

Urvashi is Mehek and Pratha's Maasi

The someone turns out to be Urvashi who was Mehek and Pratha’s mother’s younger sister.

Urvashi declares that she has always been jealous of the special treatment meted out to Rupa instead of her and demands that her offspring be Shesh Naagin too.

However, Naageshwari Shesh Naagin only blessed Rupa’s children to be the next Shesh Naagin.

By betraying her sister after biting her neck poisonously, Urvashi sat in disguise as Rupa but Naageshwari caught her in time and took all her powers away.

From that day onwards, Urvashi had wanted revenge and to regain back her Naagin powers.

Urvashi also tells Mehek that she once spotted Pratha and Mehek’s "ketchui" and soon realized that they were Rupa’s kids.

After dancing in front of the Shiv Linga, Mehek beckons Naag Raj to come and bestow her with Shesh Naagin's powers.

Mehek does not become Shesh Naagin

Along with Naag Raj, the Farishta arrives too and begins the process of crowning Mehek with Shesh Naagin's title.

However, the process does not get finished as the Naag Mani gets sucked back by the Lingam.

Naag Raj informs Mehek that either Pratha is still alive or the time right now is not suitable for Mehek to be the Shesh Naagin.

The Farishta takes out the old book written for Shesh Naagins and informs Mehek that she would have to wait for a year to become Shesh Naagin.

Mehek falls down on her knees and screams in defeat as she has waited for so long to be the Shesh Naagin.

As Mehek gets ready to sleep, the lights suddenly go off in her room.

She screams when she feels two hands around her neck and hears Pratha’s voice whisper into her ear.

Pratha tells Mehek that she cannot be Shesh Naagin until Pratha is still alive.

She also tells a scared Mehek that she did not die even when Mehek saw her dead body burn.

Like a scaredy-cat, Mehek tries to remind Pratha she is her big sister as Pratha hugs her and attacks Mehek’s back with a knife, making her scream.

However, Mehek realizes it is just a dream.

Mehek sighs in relief as she gets ready for the day.

Meanwhile, Inspector Vijay comes with some papers for Mehek to sign. Mehek tells Vijay to leave as she will not sign any papers regarding Pratha.

Vijay reminds Mehek of her bad actions but Mehek still does not accept the fact that she betrayed Pratha.

After the Inspector leaves, Mehek burns all the photos of Pratha and Rishabh together.

Acting paranoid, Mehek swears that she will not let any reminder of Pratha remain in Gujral House.

Bad dreams may come and go as Mehek lies to herself again and again that Pratha was a criminal and that is why she died.

On the other hand, Pratha comes out of the ground and is fully alive.

In the upcoming story of Naagin Season 6 on 11th June 2022, Pratha is all set to take her revenge on Mehek and Rishabh.

The current track of Naagin 6 revolves around Pratha getting betrayed by her older sister, Mehek, and her husband, Rishabh Gujral.

Rishabh and Mehek get married while Pratha suffers in jail.

After losing all her powers as Shesh Naagin, Pratha has nothing more left in her life to live as she is also sentenced to death.

As per the latest spoilers of Naagin 6, Lord Shiva will invoke his grace again on Pratha and give back her Shesh Naagin powers.

Further, Pratha will also come out of jail and plan her revenge on both Rishabh and Mehek whom Pratha loved so much before as per the upcoming twists in Nagin 6.

Let us see how Pratha's Taandav (the dance of destruction) as Shesh Naagin destroys Rishabh and Mehek's bogus personalities as Pratha rises to her power as Sarvasrestha Naagin once again.

© Copyright tellybest.com, 2020, 2021. All Rights Reserved. Unauthorized use and/or duplication of any material from tellybest.com without written permission is strictly prohibited.
Cached Saved on: Monday 3rd of October 2022 07:26:06 PMCached Disp on: Friday 7th of October 2022 03:08:24 PM