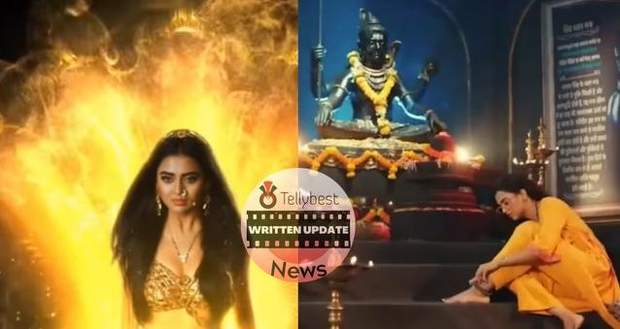 Today's Naagin 6 11th September 2022 episode starts with Prarthna running toward her father to protect him from the bees.

As soon as she touches the bees, throwing her hands into the air, the bees run away and she looks astonished.

Professor gets surprised when Prarthna tells him, that as soon as she touched the swarm of bees, they ran away.

On the other hand, the handsome man who saw Prarthna keeps remembering her while driving his car.

He says he doesn’t know when he will meet her again but her eyes were so magnetic.

He gets a phone call from Anmol who asks him when is he coming.

The handsome boy’s face is revealed and he is Rudra Raichand, Anmol’s childhood best friend.

Rudra is a young journalist with his own news company and loves his work more than anyone and anything else in this world.

As Rudra nears Gujral Mansion, he looks at the Moon and says the same Moon must be looking at the beautiful girl he saw.

On the other hand, Prarthna looks at the moon and her skin starts itching.

She scratches it and becomes disgusted when snake-like skin comes out.

She shows it to her father who becomes alert and calls RPS’ mother.

Professor asks RPS’ mother if she exchanged Pratha and his baby.

However, she lies and says Pratha’s daughter, Anmol, must have become Shesh Naagin by now but Professor doesn’t believe her.

Anmol daydreams about Rudra proposing to her

Meanwhile, as soon as Anmol is about to blow out her candles, Rudra shouts her name.

When Anmol opens it, she becomes disappointed after seeing the package has Gol Gappas in it.

Lalit and Chanda laugh while Rudra takes out another gift making Anmol say if it is Samosa now.

Rudra takes out a ring and asks Anmol to marry him.

She says yes and they both break into a romantic dance in front of everyone while Rishabh gets enraged.

However, it is just a dream and Anmol becomes disappointed to see Rudra hold a watch rather than a ring.

Anmol cuts her cake while everyone cheers for her.

After Pratha meets Rudra, he tells her that he saw a girl look exactly like Pratha.

Pratha says it is unbelievable while Anmol feels a little jealous and asks Rudra if the girl was prettier.

On the day of Red Moon, Anmol gets a nightmare where she sees herself in a Naag Mahal and gets wrapped up with lots of snakes crawling toward her.

She screams and goes to Pratha while Pratha tells her to freshen up and not focus too much on snakes.

On the other hand, Prarthna is in the market when she hears a snake charmer.

The snake charmer plays the lute and the sounds start to hurt Prarthna.

Her skin becomes golden while she covers her ears.

Only after the snake charmer has captured the snake and stopped its flute, does Prarthna becomes normal.

The local reporter & the snake charmer

The snake charmer says he is excited for the red full moon since Shesh Naag & Shesh Naagin’s powers become humungous and he can also derive benefit from it.

A local reporter hears the snake charmer’s soliloquy and asks him to give this news to his channel since it is unique.

Meanwhile, Rudra is working in his office and gets angry once he realizes that the attack of bees was planned and was sent from somewhere since the minister is dead from a bee’s bite.

On the other hand, Pratha enters the Naag Mahal after long twenty years and says she has to be here while flashbacks of her past life replay inside her mind nonstop.

She remembers Mehek, their childhood together, the moment Pratha turned into Shesh Naagin, playing the ‘Damru’ after Rishabh’s death, etc.

In the upcoming story of Naagin 6, Pratha's daughter Prarthna will become Shesh Naagin on the night of the red full moon.

The current track of Nagin 6 revolves around Anmol celebrating her twenty-first birthday with full pomp and glamour while Prarthna celebrates it simply with the Professor.

Meanwhile, Farishta who was sent by King Takshaka informs Pratha that since her daughter has come of age, will be the new Shesh Naagin.

This makes Pratha angry and she swears not to come to the Naag Mahal on the night of the red full moon.

As per the latest spoilers of Naagin 6, Prarthna stumbles into Naag Mahal and drinks the sanctified milk kept in front of Lord Mahadeva.

King Takshaka will be exclaiming that Bharat has found its new Shesh Naagin while Pratha encounters her look alike.

In the upcoming twists of Naagin 6, Pratha will be seeing Prarthna for the first time and realize it is her daughter and Anmol is Professor's daughter.

Let us see how Pratha and Prarthna's first meeting occurs at Naag Mahal in the future episodes of Naagin 6.

© Copyright tellybest.com, 2020, 2021. All Rights Reserved. Unauthorized use and/or duplication of any material from tellybest.com without written permission is strictly prohibited.
Cached Saved on: Friday 30th of September 2022 07:49:44 PMCached Disp on: Saturday 1st of October 2022 01:17:36 AM