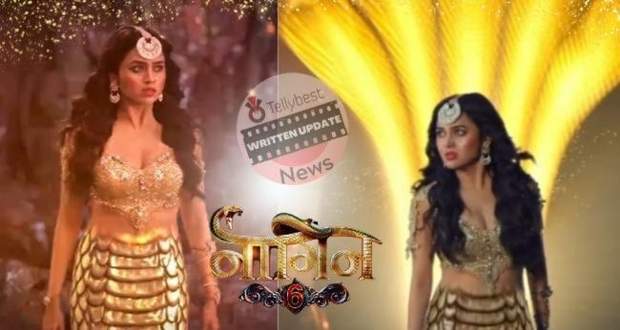 Today's Naagin 6 12th November 2022 episode starts with Prarthna coming out of her hiding spot to fight the Asuras.

Zayn and Rudra's parents laugh at the helplessness of Shesh Naagin who feels guilty about attacking her father Rishabh.

Prarthna declares to the culprits that she will not let them rob the country's wealth and Zayn points a gun at her.

At the same time, Pratha arrives there and hits Zayn with her serpentine tail which makes him drop the gun.

Prarthna grabs the gem from Zayn's hands and Zayn tries getting it back with the help of his supporters.

Both Pratha and Prarthna fight Zayn, Naman, and Rudra's parents punishing them for betraying their own friend and son.

Meanwhile, Urvashi and Patali watch the entire scene unfolding before their eyes as they remember how they guided Pratha to the terrace to get to Zayn as they want the gem for them.

Further, Zayn runs away from there while both the naagins go behind him.

Zayn goes to the cliff with the gem while Pratha and Prarthna follow him.

Zayn threatens Pratha and Prarthna with the bomb that he will blast if any of them stepped forward.

At the same time, special forces officers arrive there, and seeing them Prarthna stops the time.

Stopping the time, Prarthna grabs the gem and throws Zayn off the cliff, and bomb blasts afterward.

Pratha tells Prarthna that they have to return the gem to its original owner.

Agreeing with her mother, Prarthna goes to the temple where both mother-daughter dance to impress Shiv Ji and return him the gem.

After returning the gem, Prarthna leaves there feeling defeated as the guilt of not believing her father kills her from inside.

Prarthna appeals to Shiv Ji that she did not do justice with her position of a Shesh Naagin and failed in fulfilling her responsibilities and asks him to take away all her powers.

However, Shiv Ji doesn't heed her appeal seeing which makes her order all the Naag and Naagin to take away her powers.

As asked, all the Naag and Naagins attack Prarthna as ordered by their Shesh Naagin while Prarthna takes all the pain that comes her way as she herself chose it.

Pratha comes there at the time and stops Prarthna from giving away her powers.

Prarthna listens to her mother who tells her that the nation needs Shesh Naagin and they have to find the real culprit who attacked Rishabh.

As Prarthna assembles herself back, both mother-daughter go back to the Gujral house where Anmol greets them.

Anmol tells Pratha that she was reading about Mansa Devi who is the goddess of Naagins and wants to conduct a puja to please the goddess to ward off the evil eye.

Prarthna agrees with Anmol to organize the puja.

Pratha tells Prarthna that there is a different process for Naags and Naagins to do Mansa Devi's puja for which they will have to go to the Naag Mahal the next morning.

As decided, Pratha and Prathna perform the customs of the puja sincerely and try to impress Mansa Devi, however, the moment they leave the place the lamp they had lit starts flickering signing the arrival of problems.

Later in the day, the preparations for Anmol's engagement party are going on in full swing.

Prarthna sees Rishabh and Pratha tells her to tell Rudra the truth about his parents being the traitors of the country.

Nodding in agreement, Prarthna goes to talk to Rudra, however, she hears Mrs. Raichand talking to Rishabh's attacker as she passes by outside her room.

Turning into a snake, Prarthna enters the room to see the face of the culprit but Mrs. Raichand shouts snake seeing her which makes the culprit run away from there.

Prarthna changes herself back to the human body and asks Mrs. Raichand about the person.

On not receiving the answer, Prarthna starts choking Mrs. Raichand who starts coughing at the lack of oxygen entering her lungs.

However, Patali hits Prarthna on her spine which makes her leave Mrs. Raichand.

Meanwhile, the engagement party begins and everyone awaits the groom's entry.

Prarthna looks for Rudra to tell him the truth and her attention gets averted to the sounds of Anmol's groom entering the house.

The eyes get wider in shock as Rudra walks down the aisle and come to stand beside Anmol as her groom.

Prarthna runs downstairs from the balcony upon seeing Rudra ask what he was doing.

Pratha also asks Rudra why he is posing himself as Anmol's groom.

On being confronted about his marriage with Prarthna, Rudra shouts that he knows the truth of Prarthna's fake marriage with him and the intentions with which she had married him.

Prarthna asks Rudra to let her explain but Rudra doesn't heed her words.

Pratha takes Anmol to the side and questions her actions to which Anmol answers that Rudra himself came to her with the proposal as he has realized he doesn't love Prarthna who betrayed him.

Meanwhile, Prarthna takes Rudra to the side and tells him that his parents are traitors and she had wanted to tell him the truth.

Hearing this, Rudra gets even angrier and shows Prarthna the video in which she was choking Mrs. Raichand.

Prarthna pleads with Rudra to believe her but he doesn't and also gets triggered when she says that they are married before the holy fire.

On the other hand, Anmol tells Pratha that she is siding with Prarthna because Prarthna is her real daughter.

Pratha gets surprised to hear Anmol saying that Urvashi has told her the entire truth about Prarthna being the real daughter and her being the stepdaughter.

Rudra put some clothes on fire in the main hall and tells Prarthna that he will break their marriage before the holy fire only.

Prarthna tries to stop him but he keeps dragging her and completes 7 rounds.

Anmol smiles that the love of her life Rudra is back with her while Urvashi and Patali enjoy the sibling rivalry they have initiated between Anmol and Prarthna over Rudra bringing Pratha in the bad light again.

In the upcoming story of the serial Naagin 6 on 12th November 2022, Prarthna will get guilt-ridden as she will realize how big a mistake she had committed.

In the despair of her actions and the consequences they led to, Prarthna asks Lord Shiva to punish her and discard her supernatural powers for the sin-like mistake she did.

Seeing her daughter defeated, Pratha will mentor Prarthna and tell her that the nation needs her.

Elsewhere, the real culprit who attacked Rishabh in disguise rejoices in his victory.

To get to know more, download Naagin season 6 episode 79 or all episodes or watch the online full-show of Naagin 6 with Voot app.

© Copyright tellybest.com, 2022, 2023. All Rights Reserved. Unauthorized use and/or duplication of any material from tellybest.com without written permission is strictly prohibited.
Cached Saved on: Monday 21st of November 2022 12:43:01 AMCached Disp on: Friday 9th of December 2022 05:31:27 AM