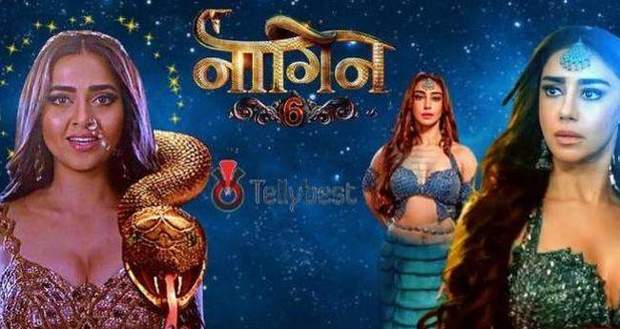 Today's Naagin 6 13th August 2022 episode starts with Kiara saving Meheck from falling and says it won’t look good if Meheck blows her face on her birthday.

Kiara chuckles while Meheck goes to show off her diamond necklace to her friends.

Her friends say they cannot even think of buying it while Mehek says Rishabh wanted her to proudly celebrate her birthday lavishly even after his death.

Meanwhile, Pratha gets emotional when she sees Rishabh’s photo hung on a wall.

She saves his photo from falling but Meheck takes Kiara to a secret room, saying she has a surprise for her.

However, Meheck just wishes to throw Kiara into the wilds of Shakti.

Kiara roams around in the storeroom, feeling confused while Meheck steps back to lock Kiara inside. Just then,

Mehek sees Kiara’s back shine under the moonlight and feels shocked to know that Kiara is Pratha.

She locks the door and hurried downstairs breathlessly to inform Urvashi about it.

Urvashi inquires Meheck why she looks so sad while the birthday cake arrives and Mehek tries to calm herself down.

Suddenly, a loud rumbling noise is heard by everyone in the hall, making Mehek think that it must be Pratha who is doing all this.

Everyone exits the hall one by one leaving Meheck and Urvashi.

Meheck tells Urvashi that Pratha is Kiara while Urvashi says she knew Kiara was Pratha all along.

Just then, Urvashi changes her form and it is Pratha who faces Meheck now.

It wasn’t Pratha that Meheck locked in the storeroom with Shakti but Gauri who is Pratha’s Naagin friend.

Both the sisters look at each other with hatred.

Pratha turns into Shesh Naagin and says it is because of Meheck that Pratha lost her innocent husband and baby.

Shesh Naagin knocks Meheck on the ground with her tail and states she will call all the Gujral Family members now.

However, they will freeze on the spot when Pratha utters a Mantra and will forget everything that happened.

All of them find Meheck lying on the ground with her face tucked under while Pratha changes into Kiara and pretends to help Meheck.

At night, Meheck wildly reacts by throwing things around in the room and tells Urvashi that Pratha is Shesh Naagin and is alive.

Urvashi gets shocked and says she did not expect this.

However, Meheck says she will beat Pratha in the Swayamvar after she becomes the Naga Raj Rani of Naag Lok.

Urvashi tells Meheck to be careful since Naag Lok is a dangerous place but Mehek knows she is playing with fire.

The next day, Meheck goes to the Naag Lok and encounters two Naagins, Barkha and Tanya, who are discussing Nag Raja’s marriage.

However, being an overconfident hellcat, Meheck says she will be Naga Lok’s Rani and beats Barkha.

Pratha stops Meheck from entering the Naag Mahal and beats Meheck in front of everyone, making Barkha smile that her revenge has been taken.

Meanwhile, Naga Raj comes after hearing the commotion outside and tells Pratha and Meheck to take personal revenge after the Swayamvar is over.

When the Swayamvar begins, all the Naagins fight with each other in a circle to reach Naag Raja.

Only Meheck and Barkha remain at the end and fight with each other.

Meheck wins and thinks she has won the Swayamvar.

However, there is the last step to it which Pratha reveals by opening the secret red door inside the Naag Mahal.

Pratha informs Meheck that she needs to defeat a Naagin named Vinaashni whose single gaze can turn anyone into a stone.

Meheck carefully treads inside the red door and reminds herself not to look into Vinaashni’s eyes, otherwise, she is finished.

It was only Pratha who organized the Swayamvar and persuaded Naag Raja to break his vow of celibacy to kill Meheck.

In the upcoming story of Naagin 6 on 13th August 2022, Meheck will be attending Naag Raja's Swayamvar to become Naag Raani of Naag Lok.

So far in the story of Naagin 6, King Takshaka refuses to grant Pratha her wish to resurrect Rishabh since he hasn't died, he is still alive.

However, Pratha does not know this and is planning to kill herself after she takes revenge on Meheck on behalf of Rishabh and her unborn baby.

According to the latest spoiler of Naagin 6, Pratha and Meheck will come face-to-face in Naag Raja's Swayamvar after Mehek learns she is no more a Shesh Naagin.

A battle of revenge and sacrifice will ensue between these two blood sisters who once were inseparable.

Let us see what occurs in Naag Raja's Swayamvar and how Pratha seeks her blood-thirsty revenge in the future episodes of Nagin 6.