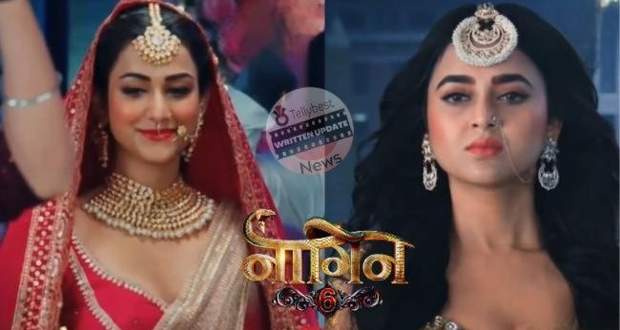 Today's Naagin 6 13th November 2022 episode starts with Rudra telling Prathna in anger that his relationship with Prathna is finished from now on while Prathna just stands there in shock.

Rudra then drags Anmol to the stage to get engaged in front of Prathna’s eyes.

After the engagement, Rudra informs Anmol that he needs to visit his mother in the hospital and Anmol offers to go.

As soon as Anmol and Rudra walk away, Prathna breaks down in tears feeling as if her whole world has crashed down.

Patali then starts mocking Pratha and Prathna for not having their husbands by their side.

Urvashi also joins and yells that she has finally ruined Pratha’s life while Prathna screams that she will teach everyone a lesson.

Later, Pratha meets Prathna in a room and consoles her.

Pratha even tells Parthna softly that Rudra's eyes are blinded by the misunderstanding that’s why he is behaving very badly with Prathna.

Prarthna even informs Pratha about Mrs. Raichand knowing about the masked culprit.

Pratha replies that now they need to make a master plan to unmask the culprit.

Prathna and Pratha then develop a plan to unmask the killer.

In the night, Urvashi offers Patali a drink to celebrate their victory as no one knows their real motive.

Meanwhile, Pratha transforms into Rishabh and goes to Urvashi and Patali's room, announcing that he is well again.

Looking at Rishabh, the color drains from Urvashi and Patali’s faces, and they question Rishabh about how he is alive.

With a smirk, Rishabh informs them he is alive because of a miracle and now he will tell Pratha the truth.

After Rishabh walks away, Urvashi calls the culprit to inform her about Rishabh’s well-being.

Rishabh aka Pratha overhears their conversation and runs to tell Prathna about it.

Pratha and Prathna meet in the hall and they find the hooded culprit lurking in the background.

Meanwhile, Prathna disguises herself as Rishabh and runs toward the masked culprit.

Later, in the jungle, Prathna transforms into Shesh Naagin catches up with the culprit and they get into a nasty fight.

During the fight, the mask falls from the masked culprit’s face and the loosened hair comes out revealing it as a girl.

The masked culprit tries to overpower Prathna but she sees Anmol’s face hidden behind.

Finding Anmol as the masked culprit, Prathna gets shocked and a flashback shows how Anmol stabbed Rishabh in the back.

Anmol even tries to stab Prathna too but Prathna snatches the knife away and drags Anmol towards home.

Later when Prathna brings Anmol in front of Pratha and presents her as a culprit, Pratha denies believing it.

Prathna continues trying to convince Pratha about it but Partha announces that Prarthna has misunderstood things again while Anmol smirks.

Pratha then hugs Anmol while murmuring that she believes in her but Anmol quickly snatches the knife again from Prathna and decides to backstab Pratha.

Prathna grabs Anmol’s hand at the same time and pushes her away from Pratha while yelling that she will not let Anmol harm her mother.

Looking at Anmol with a knife and vicious smile, Pratha is not able to believe her eyes about her precious daughter Anmol being a murderer.

Anmol however tells Pratha without any guilt that she knows Pratha used her to bring Prathna to the Gujral house.

Pratha tries to make Anmol understand that she did not know about Prarthna until recently but Anmol refuses to believe it.

She then points toward Patali and tells Pratha that Patali has told her about her real identity.

A flashback shows Patali brainwashing Anmol against Pratha by informing her how she switched Anmol with Prathna to keep Anmol safe from Naagin.

Back in present, Patali reveals to Prathna and Pratha that the professor was from the Kalkeya clan but they needed to kill him as he was becoming an obstacle in their path.

Anmol also chimes in that Pratha and Prathna are their rivals while Pratha tries to make Anmol understand that she is not her enemy but Anmol ignores it.

Angry Prarthna then transforms herself into Shesh Naagin and grabs Anmol in her tail while yelling that she will not let Anmol kill her mom.

Prarthna then prays to lord Shiva and urges the gem to give her powers but she starts feeling weak while Anmol, Patali, and Urvashi laugh like a maniac.

Rishabh and Rudra's life at stake

Meanwhile, Anmol reveals that she has replaced Prathna's Naagmani with a fake one so Prathna is just an ordinary Naagin now.

Pratha along with Prathna stares at Anmol with shock when Anmol narrates that it was a trap for Pratha and Prathna and points towards the Naagmani location.

Pratha who was standing there in denial somehow finds her voice and yells that she will bring Prathna's Naagmani.

Anmol however informs Pratha and Prathna that right now Rudra is driving the car while a truck is following him so if Pratha tries to do anything the truck will hit the car.

Anmol further adds that Rishabh is also in her captivity so Pratha should not do anything.

Hearing this, Pratha looks at Anmol with wide eyes and tries to remind her that Rishabh is Anmol's father but Anmol does not show any kind of remorse.

Anmol even yells that if Pratha and Prathna want to kill them they need to get Anmol, Patali, and Urvashi out of the house but they will not go out easily.

Afterward, Anmol, Urvashi, and Patali kick Pratha and Prathna out of the house.

Prathna gets into an accident

Meanwhile, Anmol, Patali, and Urvashi start celebrating thinking that they have won since they have the Naagmani.

On one hand, Pratha is recalling her sweet memories with Rishabh; on the other hand, Prathna is busy thinking about Rudra and her happy moments.

Prathna then turns to Pratha and screams that this is all her fault and runs away from there before Pratha can stop her.

After Prathna walks away, Pratha finds an anklet in Prathna's bag.

Meanwhile, Prathna gets hit by a car but Pratha arrives there at the same time and takes her away.

A new Challenge for Pratha and Prathna

Later, in Naagmahal, Pratha lies down Prathna on the floor and locks two anklets on her ankles.

Due to this, Prathna's body starts to glow and Prathna looks at her grandmother's portrait and this must be a clue.

After Prathna comes back to her senses, Pratha informs her that they need to meet the kaliya snake to know why Pratha'a grand maa started the rivalry.

Pratha then takes Prathna's hand in hers and they both recall their culprits.

Afterward, Pratha tells Prathna that they will make sure that their enemies kill each other.

In the upcoming story of the serial Naagin 6 on 13th November 2022, Pratha will go to see Urvashi and Patali in Rishabh's disguise.

Upon seeing Rishabh back to normal, Urvashi gets scared to her core and tells Patali that they are in danger.

Pratha in Rishabh's disguise tells Urvashi that he will reveal the truth about the person who attacked him.

Further, Pratha shares this entire information with Prarthna who feels sad after her break up with Rudra.

Somehow Pratha gets the culprit trapped in her plan and she runs behind her.

Shoving the culprit, Pratha removes the hood due to which the cap falls down and hair comes loose revealing the culprit to be a girl.

Pratha gets an utter shock as she recognizes the face feeling betrayed.

To get to know more, download Naagin season 6 episode 80 or all episodes or watch the online full-show of Naagin 6 on the Voot app.

© Copyright tellybest.com, 2022, 2023. All Rights Reserved. Unauthorized use and/or duplication of any material from tellybest.com without written permission is strictly prohibited.
Cached Saved on: Monday 21st of November 2022 12:56:37 AMCached Disp on: Wednesday 7th of December 2022 04:03:46 PM