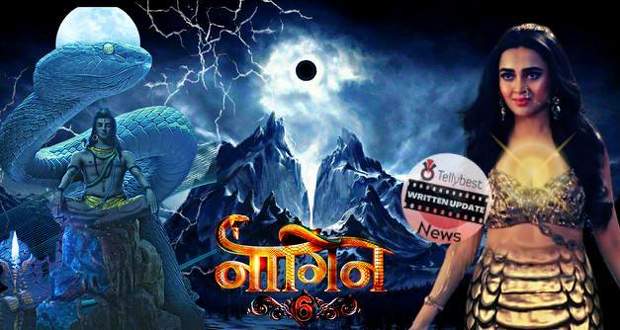 Today's Naagin 6 14th August 2022 episode starts with Meheck going inside the red room to fight a duel with Naagin "Vinaashni".

Mehek fights with Naahika inside the Laal Manzar (red room).

As she spots the big Naag Chinh (sign) on one of the pillars, she immediately moves the pillar which leads to the opening of the doors of Laal Manzar.

Seeing the door open after 100 years, Naashika is thrilled to avenge her capturers and moves to the exit.

Meanwhile, Mehek reminisces how Urvashi had guided her to protect herself after decoding Pratha’s plan against Mehek.

Urvashi also tells Mehek to not look into Naashiks’s eyes because if she does then she will turn into a stone in the same moment for her entire life.

Naashika enters the darbar and the other Naagins get scared upon seeing her.

Pratha gets surprised as she realizes Mehek has turned the tables while Naashika keeps hurting other Naagins.

Mehek enjoys as Naashika accepts the challenge and attacks Pratha with one of the pillars.

Shesh Naag denies interfering as per the custom of Naag Lok, no one can interfere in the fight between two Naagins.

Naashika strikes Pratha and throws her to the side in front of a mirror where she finds a sword.

Pratha picks up the sword as Naashika moves toward her and slices her head off her body marking the end of Naashika’s life.

After the demise of Naashika, Mehek claims to have won all three rounds of the competition as a result of which Shesh Naag has to marry her now.

Pratha feels a lot more guilty for putting Shesh Naag in such a situation as he will have to break his pledge of being a bachelorette his entire life.

Meanwhile, Mehek exchanges garland with Naag Raj after which lightning occurs in the sky.

The Almighty Shiva transfers all the powers of a Shesh Naag Rani to Mehek and her attire changes to red, adorned with jewelry.

Pratha leaves the place after Mehek becomes more powerful than her being a Shesh Naag Rani.

However, Shesh Naag calls Pratha from the back, informing her about Mehek having some evil motives about whom Shraddha (naagin) informed him.

Unaware of the fact that Shesh Naag was none other than Mehek in disguise, Pratha hurriedly leaves for the place where Shraddha is held captive.

Pratha is in danger

Pratha finds Shraddha tied up to a tree as she reaches the place and gets surprised upon seeing Urvashi, Ritesh, and Rehan having their guns held up and pointing at her.

At the same time, Mehek reveals herself there before Pratha who had disguised herself as Shraddha.

Mehek narrates how she had deceived Pratha as, being a Shesh Naag Rani allows her to take up the avtaar of Shesh Naag as well.

Pratha cannot hurt Mehek as she is a slave to Shesh Naag Rani and has to protect her from all the threats threatening her life.

Mehek captures Pratha in her serpentine tail and strikes her to the ground while Urvashi encourages her to kill Pratha.

Ritesh and Rehan are avenged

Mehek gets shocked to see Shraddha disguised as Pratha when she inhales her last breaths.

Shraddha states that she had come there to save the Shesh Naagin as she knew about the evil plan of Mehek.

At the same time, Pratha reaches there and grimaces upon seeing Shraddha lying dead on the ground.

Pratha tells Mehek that if she took even a single step forward, the land mines will blast and she will be dead along with her little army.

Mehek retorts that Pratha will also die with them which Pratha counters by saying that she had died a lot more times in the past because of Mehek. She is not afraid of dying anymore.

Meanwhile, Rehan tries to escape, however, gets noticed by Pratha after which Pratha captures him in her serpentine tail making him meet his end.

Ritesh also makes an attempt to escape but meets his end the same way as Rehan.

Pratha captures Urvashi next in her serpentine tail to make her meet her destiny while Urvashi pleads to have mercy on her.

Enraged Pratha ignores all the pleas and keeps torturing Urvashi saying she will have the ‘Intteqam’ today.

However, Mehek shouts at Pratha that Urvashi and she know a secret that nobody knows.

Pratha looks at Mehek in fury while Mehek continues to speak.

Mehek tells Pratha that her daughter is still alive as she had not killed her knowing that the baby will come in handy one day.

Pratha leaves Urvashi and requests Mehek to tell her the whereabouts of her daughter.

Mehek teases Pratha by saying that her daughter is just a look-alike of Pratha and Rishabh.

Mehek takes Pratha inside a cave as Pratha promises to not kill Urvashi and her.

Hearing the cries of a baby Pratha rushes inside and finds nobody there. Instead, Mehek traps Pratha in a net poisoned with Sarpgandha poison.

Sarpgandha poison is powerful enough to overpower the poison of a Shesh Naagin.

Mehek leaves along with Urvashi as Pratha gets tormented with the pain of not being able to save her daughter and going to meet her end today.

On the other hand, Mehek and Urvashi meet Zain who is planning to destroy the country on the 75th Independence Day of India.

The government officials are gathering in Kedarnath where the attack will happen.

Pratha cries for her loss and remembers Rishabh telling him about their alive daughter.

Rishabh arrives there after Pratha gets unconscious pleading to Lord Shiva to save her life.

Meanwhile, Zain discusses the plan of destruction with Urvashi and Mehek.

Mehek will open the doors for them at the end of the hidden path that is below the land they acquired from Rajesh Pratap Singh.

On the other hand, Rishabh encourages Pratha to get up. He reminds her of the power of being a mother, the power of their love which has not died yet.

Pratha listens to Rishabh in her unconscious state while he keeps on chanting loving yet encouraging words to empower her.

In the upcoming story of Naagin 6 on 14th Audust 2022, Meheck will be fighting with Naagin Vinaashni. Pratha thinks Vinaashni would kill Meheck, but fate has something else in store for Shesh Naagin Pratha.

So far in the story of Naagin 6, Pratha organizes a 'Swayamvar' in Naag Lok with the help of Naga Raja to lure Meheck into it.

However, Meheck would prove all odds placed against her by Pratha and triumph over Naagin Vinaashni.

According to the latest tellybest.com spoiler of Naagin 6, Pratha will lose her mind and start beating Meheck and Urvashi black and blue with Meheck revealing that Pratha's baby daughter is still alive.

Pratha would be shocked while Meheck would guide Pratha into a chamber inside to extinguish Pratha's Shesh Naagin powers.

Let us see whether Pratha succumbs to the trap laid out for her by Meheck or pulls herself together to reach her baby in the future episodes of Nagin 6.

© Copyright tellybest.com, 2020, 2021. All Rights Reserved. Unauthorized use and/or duplication of any material from tellybest.com without written permission is strictly prohibited.
Cached Saved on: Saturday 1st of October 2022 10:25:10 PM