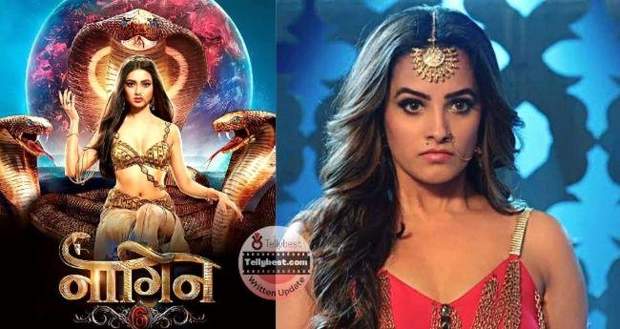 Today's Naagin 6 14th January 2023 episode starts with Seema getting angry when she realizes that Shesha and Prarthana are fooling her and Mehek together.

She decides to take revenge on Shesha who has been after her for a very long time.

Meanwhile, Raghuveer’s friends meet him at home and tease him that he has forgotten them after getting married.

He hesitates to speak when he sees Preeti since she told her that she cannot give time and effort to this marriage until she remembers everything from her past.

Much to Raghuveer’s surprise, Preeti mingles with his friends and becomes the perfect host for them.

All of them end up having dinner together and Raghu’s friends click a photograph of him and Preeti.

After the friends are gone, Raghu smiles at Preeti and thanks her but she doesn’t reply and quietly pads upstairs to their room.

After she emerges from the shower, Prarthana suddenly remembers Rudra and compares him with Raghu as both of them believe in the power of love and the sheer strength of vermillion.

Shesha tells Prarthana to move from the past but Prathna’s heart is not ready to embrace Raghu as her husband.

Both of them turn into snakes to finish Mehek’s game.

On the other hand, Seema frees Meheck from the Naag Mahal where Shesha put her along with Prathna’s help.

In the process of doing so, Seema’s asur clan kills lots of Nag and Naagins that were protecting the space.

Prathna screams once she sees that her plan has failed while Shesha reminds her that many more chances will come.

Seema tends to Meheck’s wounds and tells her about the reality of Shesha who herself is a Naagin and was scaring Meheck.

Later, Preeti’s foster siblings discuss amongst themselves how this house is not their house since Preeti is now married to Raghuveer and they need to move somewhere else.

Raghuveer hears this and decides to get the papers ready as he wants to adopt all of them.

While the kids are playing outside, Seema encourages Mehak to turn into a balloon seller and with the help of her powers, play the flute and take the kids into a forest.

Mehak lures the kids exactly like Seema instructs while the kids lose their willpower and follow the balloon seller blindly.

On the other hand, Shesha is telling Prarthana that the motivation to get the Nine Naag Manis could be Meheck’s big plan when Prathna suddenly realizes the absence of the kids.

Both of them track the kids on whom Seema has thrown a web of honey bees to attack.

Prathna shields them by forming a purple cover while Shesha realizes that Prathna’s powers could be weakened since these honey bees are not the mere ones.

Seema and Meheck witness this from behind the trees while Shesha lures the honey bees into a tank and Prathna closes the lid over it.

Shesha then spots Seema and challenges her not to hide since Shesha isn’t used to fighting with people who backstab others.

Shesha also hands up calling Meheck, “badboo” (Putrid Smell) while Prarthana stands at the back.

Seema asks Meheck to take the naag manis as soon as possible and Prarthana takes her Mausi to the Naag Mahal.

However, it is a room that is filled with mirrors.

Meheck closes her ears when she sees her reflection as a terribly old woman who mocks her for hiding her age.

The reflection asks Mehak to return the anklet that she is wearing, otherwise, she will kill Mehak with her screech.

Meheck falls as she covers her ears and Prarthana seizes the magical anklets.

Later, Prarthana returns to Shesha while Meheck becomes old and arrives to Seema who is waiting for her inside the car.

At first, Seema thinks it is an old beggar woman, however, when Mehak slaps her, Seema recognizes her.

Seema doesn’t wait for Mehak and pushes her to the ground, stating she has lived her Naagin life but Seema is just a human who doesn’t want to die soon at Shesh Naagin’s hand.

On the other hand, Raghuveer returns and gives Preeti’s kids some food while the kids urge Preeti and him to sit together.

After they are asleep, Prathna goes to Shesha and vows to take revenge from Seema and then Mehak who took her parents away forever.

In the upcoming story of Naagin 6, Meheck will escape the place where Shesha and Prathna caged her.

So far in the story of Naagin 6, Shesha and Prarthana together make Meheck trapped.

However, Seema goes to a secret cave and discovers that Shesha is a Naagin!

According to the upcoming story of Naagin 6, Shesha will reveal to Prarthana that with the help of nine manis, it looks like Meheck wants to restore her beauty.

Further, Shesha suspects that Meheck also has another mission in her mind which can prove to be very detrimental for the Naga Lok.

On the other hand, Seema will vow to destroy Shesha and Prarthana through her agile evil mind.

Let us see if Meheck is thinking of invoking another enemy Naagin to fight Shesha and Prarthana in the upcoming episodes of Naagin 6.

Is Vishaka coming back?

Brace yourselves for the exciting episode of Naagin 6.

© Copyright tellybest.com, 2022, 2023. All Rights Reserved. Unauthorized use and/or duplication of any material from tellybest.com without written permission is strictly prohibited.
Cached Saved on: Wednesday 25th of January 2023 08:54:34 AMCached Disp on: Thursday 9th of February 2023 05:43:09 AM