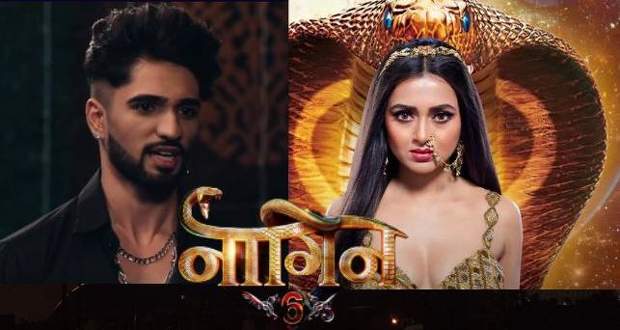 Today's Naagin season 6 14th May 2022 episode starts with Pratha troubled by Rainaksh’s presence in the house.

As Pratha wanders in the house, she hears Samaira’s screams.

Pratha runs toward Rehan and Samaira’s room without wasting any time, pushing Rehan inside and calling Samaira’s name.

When Samaira does not respond to Pratha’s calls, she glares at Rehan and accuses him of beating Samaira up.

However, Samaira does show up after a minute, emerging from the bathroom.

When Pratha asks Samaira if Rehan raised his hand at her, Samaira dithers to meet her eyes with Pratha, making Pratha suspect Rehan even more.

Rainaksh to get engaged with Anya

The next day, Seema announces that she has big news.

Everyone gathers in the living room as Seema announces that Anya has fallen in love with Rainaksh and would like to get engaged to him.

Mehak’s face warps in disgust as she watches Rainaksh gets lovey-dovey with Anya.

Pratha agrees and informs Mehak that she is right and Rainaksh is no ordinary person; he is an Icchadari Nevala summoned by Seema to prevent Pratha from obtaining the Amrit Kalash.

Powers and weaknesses of an Icchadari Nevala

Mehak’s eyes get wide open in surprise as she tells Pratha about the long history of enmity shared between the Naagins and the Nevala.

During her training days to be Shesh Naagin, Mehak was informed by her mother that the Icchadari Nevala can just about please anyone with their sweet talk.

They are notorious for troubling the serpents and are motivated by greed as they once were dear to Kuber; God of wealth.

The Nevala is infamous for attacking the serpents on their hood.

However, when Pratha asks Mehak what is the Icchadari Nevala’s weakest spot, she lets Pratha know that they are afraid of things made out of iron like iron cages.

Later, Anya and Rainaksh are both getting ready for bed when he screams out of the blue.

When Anya asks what is the matter, Rainaksh stupefyingly points toward the rat cage in fear, telling Anya to remove it fast.

When Anya picks up the rat cage and goes outside, Rainaksh gets tempted by the food item that was kept in front of the cage.

He transforms himself into his Nevala form and gobbles up the food.

On the other hand, Mehak and Pratha go inside Chanda Ma’s room as she rocks a fake baby in her hands, singing her ‘zoo-zoo-zoo’ lullaby.

Pratha softly urges Chanda to tell her what happened on the New Moon night when she lost everything.

Pratha tells Chanda Ma she can make Chanda meet her son; however, she needs to tell her more details of that dark night.

Chanda begins to utter the name “Banno” repeatedly, confusing both Mehak and Pratha.

As night dawns, Rishabh notices Pratha’s mind wandering somewhere else as she stands by the window, deeply immersed in thought.

Wrapping his arms around his beautiful wife, Rishabh asks whether Pratha is thinking about Rainaksh or not.

Pratha nods and lets Rishabh know that she gets negative vibes from Rainaksh.

She informs Rishabh that the number Rainaksh gave all of them does not work fine and she is very suspicious of his background.

Just then, they both get a knock on their door and it is Rainaksh.

Pratha’s face contorts disgustingly as Rainaksh charmingly lets Rishabh know that his previous number has been hacked and he now has a new number.

When he leaves, Rishabh asks Pratha to let go of any negative thoughts in her mind and sleep peacefully.

The atmosphere at Gujral House dwells in festivity as Seema dresses up like a bride, forcing a wheelchair-bound Lalit to put up a fake smile in front of everyone.

Everyone congratulates both Seema and Lalit on their wedding anniversary but Pratha has a surprise awaiting Seema.

Pratha has a surprise for Seema

As the preparations are done, Pratha tells Seema she has a video made for both her and Lalit.

Seema and Lalit sit on the chair as Pratha plays a video on the projector she made with old photos of Seema and Lalit’s marriage.

Just then, Mehak arrives downstairs with Chanda Ma, comfortably making her sit on a chair.

As the video continues, a picture of Lalit holding Chanda by her waist and Seema standing beside Lalit shows up, causing a surge of anger in Rishabh.

Rishabh pauses the video as he demands the truth to be out by Lalit.

Lalit wants to speak but when Seema presses his hand under the table, he dithers from speaking up.

Chanda’s head spin in circles as her memories revive a little.

Pratha subtly suggests Rishabh ask Chanda Ma about the photo since both Lalit and Seema have become tongue-tied.

Rishabh forcefully urges Chanda to speak as Chanda utters that Lalit is her husband.

Standing up, Chanda looks at Lalit with urgency as she asks him whether he is her husband or not.

This makes Rishabh uncomfortable as he yells at Lalit for hiding this truth.

Rishabh and Rainaksh get into a duel

To put a stop to the drama crafted by Pratha, Rainaksh shouts at Rishabh to stop troubling his mother, Chanda, and that he is ready to go out of Rishabh’s house without marrying Anya.

As Rainaksh grabs a hold of Chanda’s hand, Pratha tries to stop him but gets pushed by an irate Rainaksh.

Rishabh’s anger knows no bounds as he slaps Rainaksh for hurting Pratha.

Both of them get into a fight, leading to Ritesh and Rehan holding Rishabh and Rainaksh from swinging their fists at each other.

Rishabh screams at Rainaksh to leave his house immediately with his mother which causes Pratha’s heart to beat faster anxiously.

Forcing Chanda to sit inside the car, Rainaksh tells Chanda that Rishabh is her son.

However, if she wants Rainaksh to spare Rishabh, she has to tell him the exact location of Amrit Kalash.

Both Mehak and Pratha alter into their Naagin avatar and try to stop Rainaksh.

However, the Icchadari Nevala is agile and quick, hurting both Pratha and Mehak in the process.

He leaves with Chanda in the car, making Pratha feel disappointed in herself.

Chanda later reveals that the Amrit Kalash is located in the North direction.

On the other hand, Seema taunts Pratha for not being able to stop Rainaksh.

Seema further tells Pratha of the function of Amrit Kalash.

Whatever gets poured into the Kalash will spread like a wildfire across Bharat. If poison is poured, then the poison will spread.

Pratha has a long test to pass if she has to reach the Amrit Kalash before Rainaksh finds it out.

She cries in front of Seema, deeply disappointed in herself for her inability to defeat Rainaksh and save Chanda Ma.

In the upcoming story of Naagin Season 6 on 14th May 2022, the race to obtain the Amrit Kalash will begin between Seema and Pratha.

If Pratha gets the Amrit Kalash first, she will be deemed successful in her role of Shesh Naagin.

However, if Seema obtains the Amrit Kalash, only destruction would occur in Bharat.

So far in the story of Naagin 6, Seema calls an Icchadari Nevala to prevent Pratha from obtaining the Amrit Kalash.

As per the latest spoiler of Naagin 6, Icchadari Nevala would cause trouble in Pratha's way, causing her misery and time.

With a long history of enmity shared between Nevala and Naagins, Pratha will have to reinforce her strength and win this battle.

Let us see how Pratha proves herself as Shesh Naagin as she defeats the Icchadari Nevala and gets to the Amrit Kalash that has years-old secrets of her past embedded inside with its miraculous powers.

To get to know more, download Naagin 6 all episodes or watch the online full episode of Nagin 6, go to the voot app.

© Copyright tellybest.com, 2020, 2021. All Rights Reserved. Unauthorized use and/or duplication of any material from tellybest.com without written permission is strictly prohibited.
Cached Saved on: Sunday 2nd of October 2022 04:57:33 AM