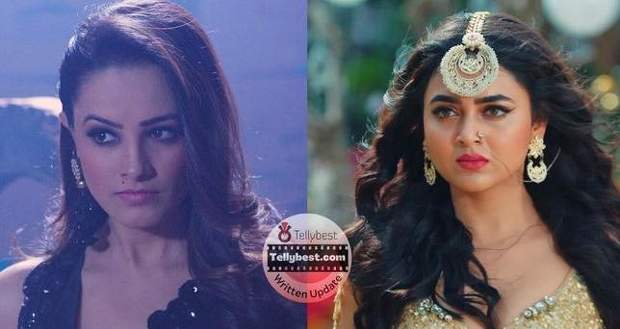 Today's Naagin 6 15th January 2023 episode starts with Seema doing a unique ritual in Rakshasa Lok and utters that she wants Kirmira Rakshasa to come who is the best at creating illusions and fooling people.

She invokes Kirmira powerfully and he appears. Kirmira questions Seema why did she call him and she answers that she wants his help to fight the Maha Shesh Naagin.

Kirmira asks Seema what he will get in return if he helps her and Seema says she has six kids to offer to him since he likes to eat them.

Meanwhile, Raghuveer tells Preeti of his decision to adopt all her foster siblings since he is also an adopted brother of Vinay and feels the kids shouldn't think of leaving the house.

Both of them sign the papers and Preeti thanks Raghuveer.

Later, Shesha and Prarthana come to Naag Mahal where Shesha tells Prathna about the magical powers of the nine naag manis and how Prarthana has to do the Japa of Maha Mrityunjaya Mantra to invoke the powers.

Prathna agrees to do it only after she has fought with Seema and killed her.

They all talk about Mahek who must have succumbed to death now while, a split second later, Meheck is shown sliding on a barren ground with old hair and a face almost unrecognizable.

Meanwhile, Gautam and Sonya congratulate Raghuveer for taking such a big step in adopting the foster siblings of Preeti.

The kids joke around that Raghuveer has done this to impress Preeti and Preeti is just walking by with Shesha at that time.

All the kids run to her and hug her.

Just then, Vinay also comes there talking to someone on the phone when he asks Prathna and Raghuveer to do a jewelry ad together for the Ahlawat diamonds.

Both of them refuse but Vinay convinces them and Raghuveer and Prathna get dressed immaculately for the photoshoot.

The photographer asks Raghuveer to open Preeti's hair as he is making her wear the jewelry.

Preeti encourages him, saying it is not too uncomfortable for her, and everyone claps when the ad is done.

Preeti is about to close her hair when Raghuveer says she looks good like this with open hair.

Is Raghuveer hiding a secret?

Later, the Ahlawat family is flying kites together on the ground while Shesha jokingly asks Raghu if he is scared to lose.

Raghuveer says that his wife is strong while the thread gets entangled around Raghu and Prarthana.

Shesha wishes for both of them to be happy while Raghuveer's finger gets sliced with the sharp thread. Prathna asks to see his hand as there's blue blood oozing out but he changes the topic glibly.

At the spot, Kirmira appears and turns into a bull while Prathna senses danger and asks Raghu to get the kids to a safe spot.

Prarthana asks Kirmira to openly challenge her while he takes the form of various bulls and Prathna with her nine naag manis identifies the real ones and kills Kirmira.

Meanwhile, Shesha goes after a scared Seema who runs away and pleads for her life by putting all the blame on Mehek, referring to her as Neeli (blue) Naagin.

Later, Raghuveer hugs Preeti once he sees her.

They all tread toward home in their car when an old lady (Meheck) comes in front.

Prathna asks Raghu to be inside the car and takes Meheck to the forest while Meheck says Prarthana is going to repent.

Prathna tells Meheck to have some water since she will die and makes a hole, putting the water pot there.

Meheck crawls in it to drink water.

Back at home, Seema brings Ladoos for Vinay and the kids. Prarthana, Shesha, and Raghuveer also arrive while then Seema threatens Prarthana that she mixed poison in everyone's ladoos.

The kids and everyone starts coughing out while Prathna rushes out to stop them from eating.

Seema pretends to be hurt by Prarthana's blame of putting poison but Prathna acts patient and hugs Seema in front of everyone.

However, there was no poison as Seema then whispers into Prathna's ears that if she acts too smart, she will kill everyone.

In the upcoming story of Naagin 6, Shesha and Prarthana will do a special "Yajna" in the Naag Mahal to defeat Seema.

So far in the story of Nagin 6, Meheck will turn old after Prathna retrieves the powerful, magic anklet away from her.

At the same time, Seema betrays Meheck in the fear of getting beaten up by Prathna herself.

On top of this, Preeti's foster siblings bring her and Raghuveer closer than ever.

According to the latest spoiler of Naagin 6, Seema will also do a special kind of ritual to invoke an old friend since without Meheck by her side, she cannot fight Prarthana and Shesha together.

As per the latest gossip of Naagin 6, Seema will invoke Visha (Vishaka) from Naagin 3 Season.

Are you excited to see this crossover of Naagins?

Let us see how Prathna avenges Rishabh and Pratha's death along with Rudra's by killing Seema in the future episodes of Naagin 6.