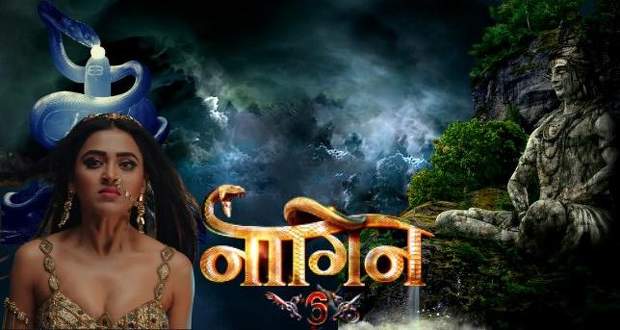 Today's Naagin 6 15th May 2022 episode starts with Rainaksh driving to the spot where Amrit Kalash has been buried hidden.

Rainaksh stops at a site in the North where he expects the Amrit Kalash to be found as directed by Chanda.

Chanda directs Rainaksh in the forest through the flashbacks from the past that come forth in her memory lane.

Seema calls Rainaksh to know if he has gotten his hands on the Amrit Kalash, however, gets stunned when he bits back at her saying that the pious Kalash won’t be hers.

Pratha enters the room and mocks Seema as tears flow down her eyes.

Meanwhile, Seema keeps on wondering how come a Nevla is listening to Naagin’s instructions.

Seeing Seema all frazzled by the sudden change of the events, Pratha narrates the story of how Meheck and her father had captured Rainaksh.

Thereafter, Meheck replaces Rainaksh and takes Chanda Maa with her to the North where the Amrit Kalash is located.

As Chanda shows Meheck the place where the Amrit Kalash is buried, Meheck informs her that the upcoming four days are going to be crucial as the fourth day will be the Lunar eclipse.

Meheck tells Chanda that she has to stay in the temple for four days until the Amrit of the Kalash is mixed in the holy river.

Chanda asks Meheck to ensure the safety of her son, Rishabh. Meheck reassures Chanda that Rishabh has gotten a loving wife who will not let danger surround Rishabh anyhow.

Pratha arrives at the temple when Chanda showers Pratha with her love while Meheck shows her concern about Chanda’s safety.

Pratha goes out of the temple and creates a protective snake boundary around the temple which she calls NaagRekha.

No one can cross that boundary other than Chanda herself comes out of it.

When Pratha’s father goes out, Rainaksh calls out for Bannu to help him.

Bannu comes out from the depths of the Earth on Rainaksh’s several calls.

The snakes try to stop Bannu, however, Bannu overpowers them and reaches Rainaksh’s cage.

Rainaksh is gleeful as Bannu frees him but Bannu attacks him.

Both Rainaksh and Bannu fight each other while Bannu mocks his opponent for calling him for help.

As the two stop their battle after three or four punches on each’s face, Bannu asks Rainaskh to leave.

However, Rainaksh denies saying that he has to get the Amrit Kalash for Seema.

Despite, Bannu’s approval Rainaksh insists on going to find Chanda to get to the Kalash.

On being asked how he’s gonna find Chanda, Rainaskh shows Bannu the piece of Chanda’s saree whose fragrance will take him to Chanda.

Meanwhile, Seema has some evil plans running on her mind against Pratha.

Seema approaches the Gujral kids, Ritesh, Rehan, and Vihaan about the changed behavior of Rishabh since Pratha has entered his life.

Reem, Rehan, and Vihaan comment that Rishabh is influenced by Pratha very much, agreeing with Seema’s verdict.

Moreover, Seema adds that Rishabh won’t name the property in his brother’s name as Pratha has become his priority.

Seeing all of them agreeing to her, Seema enjoys the magic of her words that has bewitched Gujral kid’s mind.

On the other hand, Rishabh throws a fit remembering the instance when Chanda claims Lalit to be her husband.

As Pratha walks into the room, Rishabh unknowingly collides with her while Pratha comforts Rishabh.

Rishabh shares how much disappointed he is in Lalit whose deeds make Seema suffer so much.

Pratha feels sorry for Rishabh who is concerned for the wrong person but promises him that she will always take care of his mother.

The words touch Rishabh’s heart making him take Pratha’s face between his hands with delicacy.

The two love birds stare into each other’s eyes as Pratha tells Rishabh that she loves him.

Pratha passes outside Rehan’s room where she hears Samaira screaming for help.

However, Rehan slips away smoothly when Samaira denies the accusations making Pratha come out in the bad spotlight.

Radha taunts Pratha while Rishabh asks Pratha why she has been reckless.

Pratha tries to make Rishabh trust her words. Rishabh understands Pratha’s concern for the family and reminds Pratha that Rehan is also a part of the family.

The next morning, Rishabh leaves for Surat with Rehan accompanying him for the trip.

During their journey to Surat, Rehan intoxicates Rishabh and comes back to the Gujaral house.

Pratha gets suspicious when Seema insists on taking Pratha along with her and Radha to the temple.

Meanwhile, Samaira plans to run away from the Gujaral house in Rehan’s absence but gets caught when Rehan comes back.

Later on, when Pratha returns to the Gujral house with Seema and Radha, Samaira comes running to Pratha showing the bruises that Rehan gave her.

Radha blames Pratha for brainwashing Samaira against Rehan. She claims that Rehan is innocent as he has left for Surat with Rishabh.

Thereafter, Pratha calls Rishabh to come back with Rehan as soon as possible.

Chanda is resting in the temple with Meheck by her side.

Meheck asks Chanda about Bannu and reassures her about her safety in the temple.

Leaving to inform Pratha about Bannu, Meheck asks Chanda to not step out of the temple.

A while later, Rainaksh arrives at the temple.

Being repelled by the NaagRekha that stops him from entering the temple, Rainaksh plans to make Chanda come out of it.

Rainaksh mimics Rishabh’s voice and calls out for Chanda in his painful voice.

Following the voice, Chanda steps out of the temple and crosses the NaagRekha making Rainaksh capture her in his hold.

Rishabh returns with Rehan to the Gujral house where he gets to know about the entire fiasco.

Pratha says that she has called the police.

Rishabh gets aggravated seeing her brother being accused of false reasons.

As inspector Vijay arrives at the house, Samaira confesses that Rehan beats her.

On Samaira’s accusation and her visible bruises, inspector Vijay arrests Rehan while Rishabh stops him stating the fact that Rehan was with him only.

Not paying any heed to Rishabh’s words, inspector Vijay takes Rehan into his custody.

At the same time, Radha throws a dramatic fit and gulps down the poison.

Seeing his family getting disrupted, Rishabh chides Pratha for not trusting him for Rehan.

Pratha states the facts before Rishabh that prove Rehan to be guilty and asks him to trust her instead.

Rishabh warns Pratha that if Rehan comes out clean then he will leave her as his family matters to him more.

In the upcoming story of Naagin Season 6 on 15th May 2022, Rainaksh, the Icchadari Nevala will try to get the Amrit Kalash first before Pratha does.

So far in the story of Naagin 6, Rainaksh has left the Gujral Household with Chanda and has forced her to reveal the truth about the exact location of Amrit Kalash.

On the other hand, Pratha feels disappointed in herself for not being able to save Chanda Ma from Rainaksh's malice.

A race of time and shared enmity will repeat itself again in this episode of Naagin 6 as Shesh Naagin and Icchadari Nevala fight each other for the sanctified "Amrit Kalash".

As per the latest promo of Naagin 6, Seema and Rainaksh will be doing everything in their power to prevent Pratha from reaching the Amrit Kalash.

Can a Maha Asura and a Nevala really stop a Shesh Naagin who walks the Earth with the magnanimous grace of Lord Shiva?

Let us see how Pratha fights off the Icchadari Nevala and stops the Maha Asura, Seema, from getting their dirty hands on the Amrit Kalash that has been kept safe for years by Pratha's serpent clan.