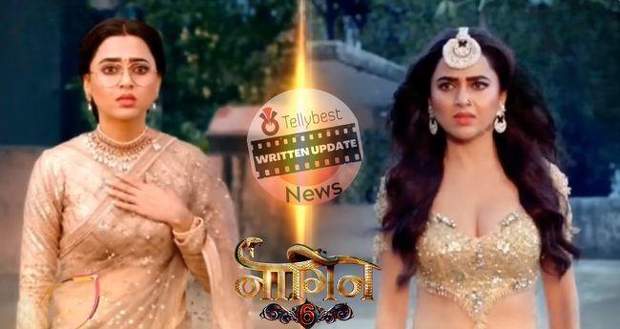 Today's Naagin 6 15th October 2022 episode starts with Pratha stopping her car when she sees the burnt body of the man on the side road.

She calls the cops and arrives at Gujral Mansion late for Prathna's marriage.

However, Anmol informs Pratha that Manav ran away from the 'mandap', stating he cannot marry an orphan girl like Prathna.

Anmol then requests Pratha to console Prathna who is staring at Jeet's photo with tears in her eyes.

Prarthna to live with PraRish

Pratha who is stuck in a dilemma of not being able to call Prathna her own daughter urges Prathna to live with them.

Missing Jeet, Prathna agrees to Pratha's proposal since she has to live closer to Rishabh whom she thinks has killed Jeet.

Meanwhile, Patali & Suhasini get happy since the fire of revenge has been lit in the next Shesh Naagin.

On the other hand, Anmol & Pratha go to fetch stuff from Prathna's closet at her house so that she is able to shift to Gujral Mansion.

Prathna internally asks Jeet's photo whether Pratha is her real mother or not & why did she abandon her early in childhood.

Suddenly, Jeet's photo slips from Prarthna's hands and Rudra picks it up.

He tells Prathna to be positive and wait for the man who would do anything for his love while Prathna thinks Rudra is a hypocrite to talk about love since he mercilessly killed Jeet.

At Gujral Mansion, the wedding planner comes to take the leftover money & Pratha volunteers to pay for Prathna.

However, a nervous Prathna says she cannot accept this favor but Pratha scolds her, saying she is her mother.

Pratha then corrects her statement and says Prathna is just like her daughter.

Anmol then asks Rishabh if Pratha can stay with them & Rishabh agrees, asking Prathna to make herself comfortable.

Showing her room, Anmol tells Pratha she can stay with her and not in the guest room, so she doesn't feel alone.

Prathna then asks an excited Anmol if she wants to marry Rudra genuinely because, for Prathna, he is a criminal, not a committed type of guy.

Later, Anmol's cousins, Anya & Vanya along with their husbands come from abroad for her marriage & get greeted excitedly by everyone.

Anya's husband then asks Anmol who is Prathna since she resembles Pratha so much.

Rishabh realizes that he was attacked by a Nagin

Afterward, Rishabh joins the police at the police station to ask about the burnt body they found.

One of the sub-inspectors says that a 'rakshasa' or a 'Naagin' can only throw the man up in the air so high near an electricity pole.

This pushes Rishabh to research Naag & Naagins in his study room.

He gets to know about Naag Mahal and his suspicion gets confirmed that he was indeed attacked by a Naagin who is also guarding the ancient Shiv temple from the anti-nationals of Bharat.

Prathna glares at Rishabh from outside, devoured by anger when she gets a tap on the shoulder from Pratha.

Prathna asks Pratha whether Rishabh spends most of his time in the study room and thanks Pratha for giving her a place when she is just a stranger.

Pratha's heart aches at Prathna's words because she cannot publicly claim that Prarthna is her daughter!

The next day, all the ladies including Anmol keep the Karva Chauth fast while Anmol's friend asks Prathna if she is going to keep one as well.

Pratha comes to defend Prathna and says she will soon find a better match than Manav.

On the other hand, Rudra cannot help but admire Prathna who sits in her seat. Just then, Rishabh comes unannounced and asks Rudra to go break Anmol's fast.

A curious Prarthna decides to follow Rishabh who doesn't go home unlike Rudra while Pratha waits for Rishabh's arrival at Gujral house.

Anmol also calls Rudra but he says he is busy, making Anmol find his location through an application.

Meanwhile, Prathna follows Rishabh who arrives at the Naag Mahal behind the Nilgiris mountains.

After Rishabh goes outside, Anmol & her friends walk in, making fun of the snake paintings hung on the wall.

Just then, Anmol sees a snake on the verge to attack her, shocking Pratha who hears her scream on the call.

On the other hand, Prarthna is ready to attack Rishabh in her serpent form who is oblivious that the Shesh Naagin he read about is standing just behind him.

In the upcoming story of Naagin 6 on 15th October 2022, both Pratha & Prathna seek answers to their questions regarding the attack on both Rishabh & Jeet.

So far in the story of Naagin 6, Jeet who is Prathna's father dies while Prathna thinks Rishabh is his killer.

According to the latest Naagin 6 spoilers, Prathna does not spare Rishabh and attacks him while Pratha gets all ready to fight the Nagin who troubled her husband, Rishabh.

Unaware of their relationship, the mother & daughter duo fight against each as Rishabh becomes the bone of contention, playing the role of a husband consciously and that of a father without awareness.

How will this mother & daughter Naagin rivalry go down in history when Pratha & Prarthna learns of their relationship with each other?

Let us see how Pratha & Prarthna fight against each other, one protecting while the other seeking revenge, in future episodes of Naagin 6.

© Copyright tellybest.com, 2022, 2023. All Rights Reserved. Unauthorized use and/or duplication of any material from tellybest.com without written permission is strictly prohibited.
Cached Saved on: Monday 21st of November 2022 05:49:40 AMCached Disp on: Monday 5th of December 2022 12:56:27 AM