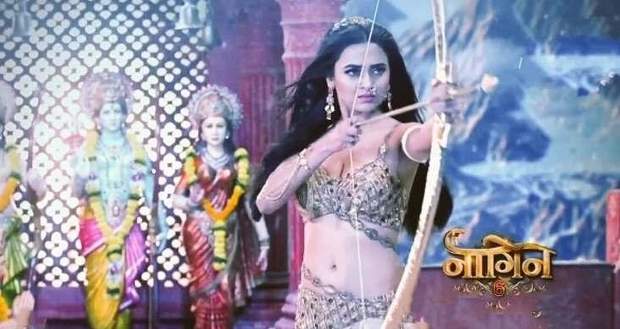 Both of them steal glances at one another yet there is something that makes both of them hesitate to speak the truth.

Pratha again breaks Rishabh’s heart by saying she is just after his money.

As she exits the room, she cries but Rishabh is not able to trace her tears.

On the other hand, Pratha’s Dad is the fifth Asura. However, both the sisters do not know about their father’s truth.

Pratha’s father reminisces and tells both Pratha and Mehak that he tried to track down the boy who put their house on fire. However, the one was dead and the other one escaped.

As the clock hits twelve, Mehak reminds Pratha that it is her birthday.

Pratha laughs nervously and says that she forgot it was her birthday due to all the chaos happening.

Their father narrates how Pratha used to grill him about the significance of Pratha’s birthday falling on Ram Navami.

As soon as Pratha and Mehak begin to get ready to do ‘Abhishekam’ for Lord Shiva, their father pleads to join them in the Puja too.

Pratha tells her father to rest but he remains persistent.

Their father wants to join the Puja so he can steal Pratha’s Naag Maani which she will put in front of Shiva’s Lingam during the worship.

However, Pratha and Mehak are not aware of the fact that their father is joining them so he can steal Pratha’s auspicious and sacred Naag Mani.

Between the Brahma Muhurta, that is, 3:30 AM to 4:30 AM, Pratha along with Mehak does the Abhishekam devotedly.

When their eyes are closed in meditation, Pratha’s father takes the real Naag Mani and replaces it with a bogus one.

Unaware, Pratha puts it back into her navel and is pleased when the Puja is finished.

Rihaan gets irritated by Pratha's presence

The next day, before breakfast is served, Pratha catches Samaira in an uncompromising situation with Rihaan.

Rihaan gets irritated by Pratha’s constant watch on him.

When Rihaan tells the Sardar that he wants to hurt Pratha, Pratha’s father grabs Rihaan’s throat by force.

He tells Rihaan to keep his dirty hands away from Pratha. Otherwise, the result won’t be satisfying.

During the breakfast, Pratha’s father presents himself as Pratha’s guru in front of the whole Gujral Family and announces that it is her birthday today.

Seema rises from her seat and wishes Pratha a very happy birthday.

Both Rishabh and Pratha bow down in front of Raam and Sita Ji’s idol.

Seema wishes that Rishabh and Pratha stay together just like Raam and Sita did.

After breakfast, Rihaan informs Vihaan that he will call Reem to Pratha’s birthday party to create trouble for Pratha.

Standing in front of the mirror, Pratha is unable to tie the blouse of her saree.

Taking notice of it, Rishabh asks her to remove the saree and wear a red dress that Seema chose for her.

Pratha gets flabbergasted looking at the dress but wears it anyway.

Pratha gets shy in front of Rishabh as she emerges out of the bathroom.

Rishabh taunts her that if Pratha is after money, she’s already getting it in form of a dress.

Pratha snaps at Rishabh and tells him that she is hesitant because she has never worn a dress like this before.

Rishabh helps Pratha get into her heels and Pratha’s heart melts.

Both Rishabh and Pratha dance together as a couple.

Between the dancing, Rihaan steals Pratha’s phone to text Yash to meet Pratha outside.

After the dancing gets over, Vihaan tells Pratha that Rishabh is waiting for her outside.

Instead, it is Yash.

Yash hugs Pratha from the back thinking Pratha likes him.

Pratha turns around. When she realizes it is not Rishabh, she shrugs Yash off instantly.

Reem and Rihaan enter as soon as Rishabh starts accusing Pratha of adultery.

However, out of the blue, Rishabh slaps Rihaan, shocking everyone.

Rishabh knows the truth and tells all of them that he was playing along just to see how low can Rihaan stoop.

Rihaan gets another slap from Pratha’s dad alone despite his warnings.

Pratha begins to feel tender towards Rishabh and is all into him when she cuts her birthday cake.

Reem leaves in anger yet Rishabh stays by Pratha’s side.

On the other hand, Pratha’s dad begins to worry about Rihaan hurting Pratha as Pratha won’t be able to invoke her divine powers as the Naag Mani inside her is fake.

He resolves to personally keep an eye on Pratha for her safety.

Pratha gets butterflies for Rishabh

As the night dawns, Pratha grazes her hand over Rishabh’s face as he sleeps.

The next day, Rishabh wakes Pratha up abruptly.

He instructs Pratha to get ready so he can take her shopping.

During the car ride, Rishabh asks Pratha whether it is her first time receiving any birthday gift or she remains nervous all the time.

Pratha’s mind goes into a flashback to when her father gifted her a couple dancing inside the globe.

Pratha murmurs that only her father has gifted her something; no one after that.

Rishabh expects Pratha to pick out the most expensive jewelry she can.

He wants to test Pratha and see whether she is greedy for money as she says or if there is something else to her intrigue.

Pratha snaps at Rishabh when he taunts her to pick out a jewelry set worth crores.

Just then, Pratha’s eyes catch an object that resembles the same globe her father had gifted her years back.

She tells Rishabh she wants to buy it, leaving him utterly confused.

Pratha forces Rishabh’s mind to go into a reel of thoughts anew as he finds himself wanting to explore every bit of Pratha.

But is Rishabh ready to find out the truth behind his big-innocent-eyed, beautiful wife?

According to the latest spoiler of Naagin Season 6, Pratha and Mehak are finally happy to be reunited with their father whom they thought had died.

However, the two sisters will be surprised to find out that their beloved father is one of the major Asurs who is keen to sell Bharat to Chingistan.

In the upcoming Ram Navami Special Episode of Naagin 6, Pratha and Mehak's father will reveal to them that he's the fifth Asura or the Sardar they have been searching for.

Pratha asks his father to reveal where the poison is.

However, Pratha's father says that both the poison and ambrosia are in Pratha's sweat and blood and if it falls on the ice, then the result will be disastrous.

A single drop of either sweat or blood on ice can wreak havoc on the country.

Though Shesh Naagin is a devoted Lord Shiva follower who believes in destruction but on the auspicious occasion of Ram Navami, will Pratha act out on the path laid out by Lord Shri Ram of grace and justice?

Being the Shesh Naagin, can Pratha slay her father for his sins despite the bond she shares with him?

Let us see what happens in this most awaited episode of Naagin 6 as all viewers wait in anticipation for the action to be followed in Naagin 6.

To get to know more, download Naagin 6 all episodes or watch online today's (16th April 2022) latest episode, go to voot.com.