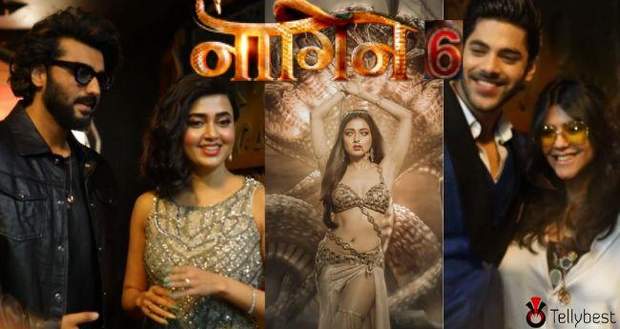 However, Shakti is getting madder second by second to know Kiara’s name.

The moment he saw Kiara’s face, he fell in love with her.

Shakti asks Urvashi, again and again, to tell him Kiara’s name and Urvashi says her name is Deepika Padukone.

Meanwhile, Mehek is busy plotting another plan to see whether Kiara is Pratha or not.

She changes the music to the tune of clarinet or Shehnai to see if Kiara gets affected or not.

Pratha does get affected and her skin begins to glow golden.

On the other hand, Rehan checks Divya’s phone secretly to see if there is any relationship between her and Vihaan.

Just then, Riya comes and scolds Rehan for snooping on Divya’s phone.

Riya tells him Divya is free to text anyone just like Rehan did multiple times in his past.

When Riya threatens to tell Rehan’s truth to Divya, Rehan pushes her.

Riya’s head gets hurt and Rehan is scared as he realizes she is no more breathing; she is dead.

On the other hand, Rajesh saves Pratha before she falls and takes her into Rehan’s room to rest.

Rehan’s expression turns worried when Divya takes Kiara to his bathroom to wash her face but they do not see Riya’s body hidden inside it.

When Pratha stares back at her reflection in the mirror, she scolds herself for opening up to Rishabh.

Before the commencement of Divya and Rehan’s engagement, Kiara argued with Rishabh that his ex-wife never cheated.

The next morning, all the Gujral Family members along with Kiara, Rajesh, and Divya see the news together about a criminal who killed a bride yesterday just before her "pheras".

Rehan whispers into Ritesh’s ears that it is a perfect opportunity to put the blame on the new criminal in the town if someone finds out that Riya is dead.

Arjun Kapoor invites the Gujrals to the premiere of Ek Villain

Meanwhile, Inspector Vijay enters the Gujral House and informs everyone that they have been invited to the premiere of the Ek Villain movie by Arjun Kapoor.

Reem gets excited the most as she is a big fan of Arjun Kapoor.

However, Urvashi taunts Reem for eyeing Rajesh and Arjun rather than her husband, Ritesh.

Reem replies what is there to stare at Ritesh because Reem is deserving of a handsome partner in her life.

Meanwhile, Urvashi feels worried for Riya when she does not pick Urvashi’s calls.

On the other hand, Arjun Kapoor arrives at the premiere from the back end of the door because of security reasons.

Rishabh thinks he is a criminal but gets shocked when he sees it is Arjun Kapoor.

Rishabh calls out Kiara and Rajesh to meet with Arjun.

Kiara smiles while Arjun thanks them for coming to his premiere.

After the movie ends, Urvashi informs Inspector Vijay about Riya’s abrupt absence and says she saw Riya last with Rehan.

Rehan hears this and runs for his life because he is afraid of being questioned and beaten up by the police.

However, he encounters Riya’s dead body on the road and falls down.

Rehan gets scared when Riya’s dead body comes alive and turns into Naagin.

Rehan gets beaten up

It is Pratha’s Naagin friend who beats up Rehan head to toe.

When Urvashi and Inspector Vijay approaches Rehan, they find him unconscious on the road.

Pratha’s Naagin friend gives her a subtle nod, confirming that she has thrashed Rehan as per Pratha’s instruction.

Pratha nods in return and says that her first Inteqaam is done and the second one will just begin.

In the upcoming story of the serial Naagin 6 on 16th July 2022, Pratha (disguised as Kiara) will be getting haunted by the serial killer running around the city who kills unfaithful girlfriends.

So far in the story of Naagin Season 6, Shakti has gotten infatuated with Kiara and wants to get out of the locked room to get close to her.

Meanwhile, Pratha almost exposed herself to Rishabh during an argument but Rajesh saved her at the last moment.

As per the latest spoilers of Nagin 6, Kiara will roam around the house trying to get away from people as she feels lightheaded.

Unknowing the fact that she is feeling hungover as her drink had been drugged by Mehek, Pratha goes to a secluded area when a man wearing a smiley face mask starts following her.

Pratha feels the man's presence and tries to escape from him in her dizzy state.

However, the man turns out to be the serial killer who is going around the city killing unfaithful girlfriends and tells Kiara that she does not need to feel threatened by him as she didn't cheat on anyone.

Let’s watch if this serial killer's entry will prove to be an opportunity for Pratha to get another revenge or will the serial killer becomes another name on her list of betrayers.

Further, Yeti will make a comeback in Naagin 6 while Urvashi and Mehek join hands with the terrorists in the future episodes of Nagin 6.