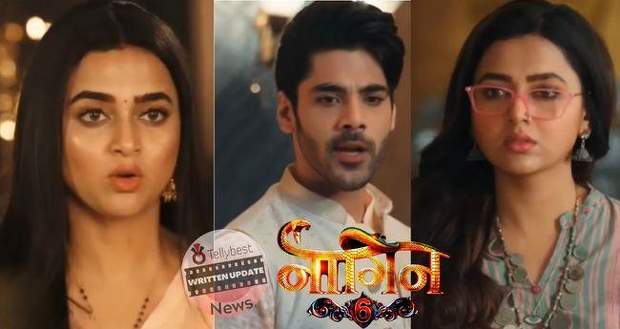 Today's Naagin 6 16th October 2022 episode starts with Anmol screaming when she sees a black hooded snake ready to attack her.

Rudra hears her scream and runs to save her.

On the other hand, Prathna in her snake form grabs Rishabh by her tail and throws him on the ground.

His forehead starts to bleed while Pratha also arrives at the Naag Mahal & sees a big Naagin attack Rishabh.

Meanwhile, a scared Anmol hugs Rudra while he asks her angrily why she had to come here alone.

Prathna VS Pratha (Mother VS Daughter)

Outside, Pratha doesn't waste any second transforming herself into Shesh Naagin & fights the other Naagin who is Prathna.

Rishabh gets unconscious while Prathna runs away along with the wind.

Getting emotional, Pratha heals Rishabh's wounds while he gets confused when he sees them gone after waking up.

Rudra, Anmol, Pratha, & Rishabh then go back to Gujral house where Chanda asks them to get ready fast for the Karva Chauth Pooja.

Rishabh stares at himself in the mirror while Pratha asks him what he is thinking about & why he went to the Nilgiris.

He confesses that on the day of Prathna's marriage, he got attacked by a Nagin & now believes in the existence of Naag & Naagins.

Pratha gulps in fear as she remembers she still hasn't told Rishabh the truth about Shesh Naagin.

Anmol gets angry at Rudra on Karva Chauth

On the other hand, Anmol notices how lovey-dovey her parents are and tells Rudra that she wants her love story to be the same as theirs.

However, Rudra can only stare at Prathna who sees all the ladies break their fast from a distance.

Pratha then notices the discomforted expression on Prathna's face whose skin starts to turn red after the moon's rays hit her.

Prathna asks Pratha not to worry as it is normal whenever she feels nervous.

Meanwhile, Rudra gets a call in between breaking Anmol's fast and she drinks the water herself in anger.

Afterward, Pratha visits King Takshaka to ask about the Naagin who is attacking Rishabh continuously, however, King Takshaka does not reveal it is her daughter.

Later, Pratha & Prathna come face-to-face and they both think about the other Naagin who attacked Rishabh and saved him as well.

Suddenly, Rudra arrives along with his parents & a parent who states that the perfect 'muhurat' for Rudra & Anmol's marriage is after two days and after three months.

Rudra & Anmol's marriage is to be held in 2 days

Rudra opts for three months but an excited Anmol says she wants to get married within the next two days.

Afterward, Anmol & her friends along with Pratha go shopping for the wedding when suddenly, Pratha sees Urvashi driving in the opposite car.

Pratha gets out & follows Urvashi's car in her snake form but her car crashes and she disappears.

Later, a scared Urvashi goes to inform Patali & Suhasini that Pratha saw her & Patali scolds Urvashi for her silly mistake.

At Gujral Mansion, Pratha asks Rudra's parents to shift with them since the marriage is in the next two days when suddenly Patali comes to serve Pratha her tea.

Pratha gets shocked while Patali says she is here once again to see the end of Shesh Naagin.

A second later, Urvashi also enters the house, smirking evilly at Pratha, threatening her that she still hasn't told Rishabh about her Shesh Naagin secret.

Urvashi then pretends to be sorry in front of Rishabh and concocts a story of losing her memories and coming to this house after gaining her memories to see Reem's daughter.

Pratha gets alert as now both the enemies have gained entry into her house.

Afterward, Patali tells Urvashi that Rudra & Anmol's marriage lacks a 'tadka' (spiciness), so Urvashi screams 'snake' to scare everyone at the marriage and instructs Rishabh to call a 'sapera'.

Both Prathna & Pratha get frightened since they will lose consciousness once a 'sapera' enters.

Pratha's skin turns golden along with Prathna's as both of them hide behind the pillars, struggling against the magnetic tune being played by the snake charmer.

Prathna goes outside and covers her ears while Pratha hides in a room and turns into a snake.

Just then, Rishabh sees this and goes to tap on Pratha's shoulder.

However, she changes her face and escapes while Rishabh's suspicion firmly turns true about Icchadari Naagins.

On the other hand, the sapera falls on the ground due to the strong, gushing wind while Prathna throws his 'been' away.

Meanwhile, Pratha promises to tell Rishabh the truth about her existence after Anmol's marriage.

In the upcoming story of Naagin 6 on 16th October 2022, Pratha feels worried for Rishabh since he gets attacked by a Naagin again.

So far in the story of Naagin 6, after Rishabh doesn't arrive on time at Gujral Mansion, Pratha finds him near the Naag Mahal behind the Nilgiris.

As per the latest spoilers of Naagin 6, Pratha changes her avatar into Shesh Naagin & fights with the serpent which is Prathna. However, both of them are unaware that they are fighting each other.

Further, as per the upcoming twist of Naagin 6, Pratha goes to King Takshaka to reveal to her the face of the Naagin after Rishabh's life.

The King of Serpents keeps quiet and asks Pratha if the time will tell her.

Let us see how Pratha resolves to save Rishabh herself by using her secret Shesh Naagin powers after a long haul of 21 years in future episodes of Naagin 6.

© Copyright tellybest.com, 2022, 2023. All Rights Reserved. Unauthorized use and/or duplication of any material from tellybest.com without written permission is strictly prohibited.
Cached Saved on: Monday 21st of November 2022 06:04:02 PMCached Disp on: Thursday 1st of December 2022 01:01:29 AM