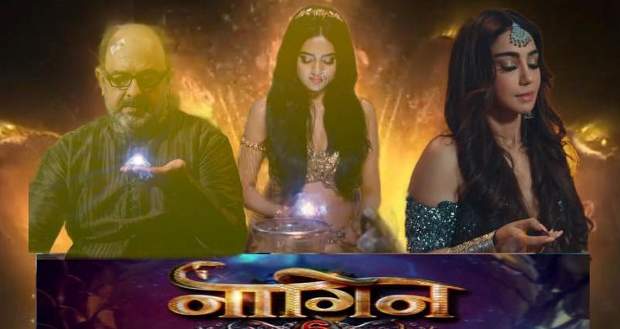 Today's Naagin 6 17th April 2022 episode starts with the thieves entering the jewelry shop Pratha and Rishabh are in.

The thieves do not attack anyone or steal anything inside the shop.

But their aim is Rishabh.

Upon noticing the intent of the thieves, Pratha comes and stands in front of Rishabh.

She tries to transform herself into Shesh Naagin but she is not able to invoke her divine powers.

With no option left, Pratha takes the bullet in her hand, saving Rishabh.

The police arrive shortly but hearing Pratha’s pained cry, Rishabh rushes to pick Pratha up in his arms.

While taking the bullet to herself, Pratha drops the globe she bought.

She points toward the globe and Rishabh carefully lowers Pratha so she can have it.

His eyes show the concern he has for her and treats her softly.

Mehak gets angry at Pratha

Mehak comes in, contacting the doctor. The doctor treats Pratha’s wound, announcing that she will be alright after a couple of days’ rest.

After Rishabh leaves the room, Mehak asks Pratha angrily why she took the bullet to herself.

Pratha’s voice is all soft when she tells her big sister that she took the bullet for Rishabh.

The thieves were out to attack Rishabh but Pratha did not want Rishabh to be hurt.

Mehak gets livid with Pratha’s nonchalant expression and asks her the need to do so.

Pratha informs Mehak that she did not want to regret so she took the bullet.

Pratha also mentions that she was not able to invoke the powers of her Naag Maani, no matter how hard she tried.

Mehak gets angrier and asks Pratha whether Pratha dropped the Naag Maani voluntarily because she is in love with Rishabh.

Pratha denies doing so and tells Mehak that after the Abhishekam she did on Ram Navami, she is not able to invoke the powers and transform into Shesh Naagin.

Rishabh treats Pratha as "his" wife

When Pratha feels alright, Rishabh brings her downstairs and narrates the whole incident to the family.

Seema personally thanks Pratha for saving Rishabh as he is the eldest son of the house.

Throughout the conversation, Rishabh calls Pratha his wife in front of the whole family so lovingly that Pratha’s belly stirs with butterflies.

She gazes at Rishabh as he tries to stuff Samosa in her mouth.

He laughs at Pratha when she makes a face at him.

Abruptly, Rishabh gets a call and he exits the conversation in between.

Pratha follows Rishabh into the room and notices that there’s a naked wire evoking shock on the floor and Rishabh is paying no attention to it.

She tries to invoke her power but in vain.

With no option left, Pratha grabs Rishabh’s elbow which makes her fall onto him.

The love in their hearts for each other keeps them hooked with their eyes which none of them is ready to blink.

The romance through the eyes is supplemented by the background music "Tose Naina Jabse Mile".

Both of their eyes lock and Rishabh’s hand creeps closer to Pratha’s exposed back.

Coming out of the trance of Pratha's eyes Rishabh without saying anything, stabilizes both of them.

Pratha points toward the wire silently and Rishabh thanks Pratha for it.

Pratha tries to find the Sardar

Mehak takes Rihaan’s phone and messages the Sardar or the mastermind saying that he will kill Pratha because she is very annoying and is a hindrance.

Reading this message, Pratha and Mehak’s father texts Rihaan back, calling him into his room.

Rihaan tells him that he did not text the Sardar anything.

Pratha finds out her father's truth

Her eyes are lined with tears now that her father’s truth is out.

Paranoid, Pratha searches for her Naag Mani but his father snatches it before she can.

Purposefully, he hits Pratha’s hurt hand that knocks her down on the floor in pain.

Pratha’s father escapes while Rishabh and Mehak rush to Pratha.

When night dawns, Mehak suggests Rishabh rest while she can keep an eye on Pratha.

On the other hand, Pratha’s father speaks to the Naag Maani, instructing her to come to meet him in the icy land.

Both the sisters follow the instructions given to Pratha.

When the sisters show up, both of their eyes are in deep pain to see their father's side with Chingistan.

But their father narrates his argument too.

He tells Pratha and Mehak clearly that he does not love Bharat or Lord Shiva.

If Lord Shiva was there, he would have appeared to save Pratha and Mehak’s mother from the fire but he did not.

Their father gets hysteric when he utters that he lost his wife and both of his daughters, so where was this nation when he needed justice?

Their father further reveals that Pratha’s entire body is full of poison.

If any droplet of her sweat or blood falls on the ice that will later melt into the river and flow throughout Bharat, Pratha will be the one who would be poisoning the nation she wants to save the most.

Manipulating and emotional talking to Pratha, the Sardar whistles, and calls upon several Kites upon Mehak.

Both Pratha & Mehak get tested

Mehak finds it hard to battle with them.

Pratha can’t do anything because her powers are in the Naag Mani which her father holds in his hand.

When the kites approach Pratha, Pratha runs away as fast as she can.

Almost on the verge to give up, Pratha stumbles upon the steps of a Ram Mandir.

She prays to Lord Rama to give her powers back.

As if miraculously, a tornado forms disturbing the Sardar’s balance.

His grip on Naag Mani loosens and as soon as Pratha nears, he catches the Naag Mani himself again.

Pratha in desperation lays on the ice, lifeless, and a second miracle happens.

Pratha’s father gets hit by an arrow and this time the Naag Mani ends in Pratha’s mouth and takes its place; in Pratha’s abdomen.

Relieved, Pratha tells her father that she is one step away from killing the fifth Asur.

Her father urges her to kill him as Pratha takes the arrows and bow in her hand.

Will our Shesh Naagin be strong enough to kill her father to save the very nation that birthed her?

According to the latest spoiler of Naagin Season 6, Pratha and Mehak will find out their father's truth.

Both the sisters will be shocked to know that their father is the fifth Asura who is keen to sell Bharat.

After stealing Pratha's Naag Maani during the Abhishekam on Raam Navami, Pratha will plead to her father to let her know where it is.

Instead of helping Pratha, her father will reveal that if any droplet of Pratha's blood falls on the ice, all of Bharat will get poisoned as she is the one who is carrying the poison inside of her now.

Pratha's dad will further tell her that both Raam & Raavan resides inside one's self.

Pratha will fall at the steps of an ancient Raam Mandir and pray to Lord Raam to aid her with his undeniable strength.

Will Pratha succumb to her injuries and the deep betrayal by her biological father?

Or will she get up to save her nation once again?

Let us wait for this thrilling episode that is going to put Naagin 6 fans into an ecstatic frenzy!

To get to know more, download Naagin 6 all episodes or watch online today's (17th April 2022) latest episode, go to voot.com.

© Copyright tellybest.com, 2020, 2021. All Rights Reserved. Unauthorized use and/or duplication of any material from tellybest.com without written permission is strictly prohibited.
Cached Saved on: Friday 30th of September 2022 09:41:12 PMCached Disp on: Saturday 1st of October 2022 04:52:02 PM