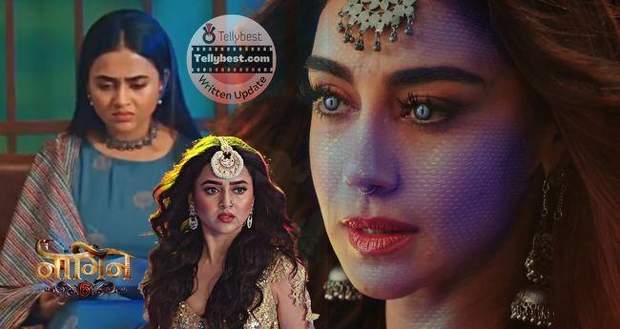 Today's Naagin 6 17th December 2022 episode starts with Raghubir bringing an unconscious Preeti (Prarthana) back into the house as the kids reveal that their Preeti Didi got sick yesterday by getting wet in the rain and giving her favorite yellow umbrella to someone else.

Raghuvir smiles as he realizes that the Ajnabi Haseena who gave her the umbrella was none other than Preeti.

Meanwhile, Mehek gets traumatized as her mind mocks her and an old version of Meheck appears, taunting her for how long she is going to hide her true old self.

Mehek then beckons another Naagin named Dhanlikha who can smell anything from anywhere and gives her the peel of Maha Shesh Naagin (Prarthana), instructing her to find her location even if she is in Heaven, Hell, Naga Loka, Pataal Loka, or Pari Lok.

Meanwhile, Preeti's foster siblings haven't eaten anything and Gautam says he will go out and look for a job.

Just then, they both hear their siblings laugh and realize that Raghuvir has brought free food for them all.

Preeti says she cannot afford food worth a thousand rupees but Raghuvir asks him not to worry as the bell of his heart starts ringing seeing Preeti and Ek Ajnabee Haseena Se song playing in his mind, body, and soul.

Preeti bids him goodbye after eating the food and asks him how he afforded so many food items for them.

Raghuvir lies that he had a food coupon and leaves on the cycle and removes the old brown shirt, revealing his business suit-clad body.

He gets a call from his office where a meeting is about to begin and he races there on his bicycle in fashion.

Meanwhile, Preeti grumbles and picks up the toys left by her younger siblings, saying in the morning they will ask her "Didi where is my bat, my ball?".

However, Dhanlikha comes there, smelling Prarthana's skin and taking the form of an old lady.

She pretends to be a beggar and asks for some money.

Before Preeti can react, Dhanlikha appears in her real form, scaring Preeti and knocking her unconscious with the tail to bring her to Mehek.

However, the Maha Sarvasreshtha Shesh Naagin hasn't died down within Prarthana and gets up to warn Dhanlikha not to hurt her since she may have lost her memories as a human but the Naagin inside of her resides eternally.

Raghu is in love with Preeti

On the other hand, a lovestruck Raghuvir paints Preeti but the eyes aren't done yet.

Just then, his brother and Mehek enter his room and Mehek curiously asks him about the girl he is drawing.

Raghuvir lies that he hasn't met her but only in his dreams while Seema calls Mehek outside.

When Meheck protests to go, Seema says she is taking her to the jungle to do "mangal" but Meheck gets shocked to see Dhanlikha dead.

An old man in the night tells both of them that he saw a big, grand Naagin kill Dhanlikha.

"Didi, you have disco lights!"

However, Meheck strangulates him when he says he doesn't know where that Naagin went.

Later, Preeti's kids bring her back into the house, and the youngest of them tells Preeti she saw nine disco lights illuminate her body, making Preeti confused.

Meanwhile, Seema tries to tell Meheck that it might not be Prarthana that she saw but Mehek is sure and states Prarthana's Maha Shesh Naagin duties will bring her to him.

Meheck decides to gather an army of snakes, ordering them to kill all the men of the city and people starts dying out of nowhere from getting bitten by snakes.

Preeti Gets a Model Job

The news reaches Preeti and her siblings and Raghuvir come to meet them the next day.

Gautam informs that the whole city will be under lockdown while Preeti gets worried as to how they are going to manage their expenses.

She expresses her worry to Raghubir, saying his life is set while she has no means to earn and denies eating food brought by him.

Preeti's eyeballs pop out of their sockets while her siblings playfully protest that they won't agree that easily at five thousand.

They take the amount up to seven thousand and ask Raghuvir whether the food given to them will be free or not.

Raghuvir nods and Preeti accepts this job as Raghu's heartstrings play for a while.

The Vo Ajnabi Haseena Se song plays again as Raghuvir offers to take Preeti on his bicycle every day, making her feel shy.

In the upcoming story of Naagin 6 on 17th December 2022, King Takshaka is seen stating that the time has come to grant the wish made by Prarthana, who has forgotten her memories but is still a Maha Saravasreshtha Shesh Naagin.

So far in the story of Nagin 6, Raghuvir sees Preeti AKA Pratha on a rainy day and falls in love with her at first sight, giving her the name of Miss Ajnabi Haseena.

As per the latest spoiler of Naagin 6, Preeti and Mehek will have a face-off after Prarthana starts to remember her past through dreams in her sleep.

The past memories will come to haunt as the Naagin aunt and Maha Naagin niece have a face-off.

Let us see how this Maha Yudh (Grand Battle) of the Serpent Queen takes place as Lord Shiva's grace places her in an extraordinary position to be able to win as well live a stealthy life.