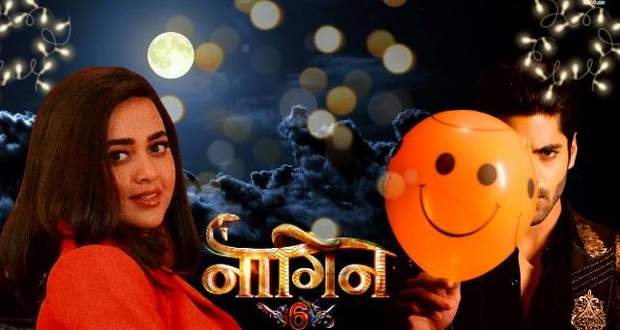 Reem says her heart was broken when she heard Arjun Kapoor started dating someone else.

On the other hand, Inspector Vijay catches Rehan lying on the road with Urvashi and asks where Riya is.

Riya shows up and Urvashi tells her she was so much worried for her. However, seeing Riya alive makes Rehan scared to death.

Meanwhile, Pratha wears a mask on her face to spot the criminal who is on a spree to kill the girls.

As expected, Pratha intentionally gets kidnapped by the man with Rishabh following the duo secretly.

The killer tells Pratha he is killing girls because they betray their boyfriends or husband but Pratha says she is not a heartbreaker.

When the killer raises his hand at Pratha, Rishabh grips the killer’s hand and swings him right.

However, the killer cuts Rishabh with a knife. Pratha hurriedly transforms herself into Shesh Naagin and beats the killer.

He gets scared seeing Pratha’s Naagin avatar and commits suicide by jumping off the cliff.

When Pratha brings an injured Rishabh back home, Rajesh Pratap Singh scolds Pratha for caring so much for Rishabh when he has to be killed anyways by Pratha.

However, she defends herself saying how much blood he lost and had to be saved.

Rajesh is protective of Pratha

Divya takes notice of Rajesh’s growing protectiveness over Pratha and interrogates him if he is slowly falling in love with her.

Rajesh denies such claims and leaves in a hurry. Meanwhile, Urvashi and Mehek visit Zain on his ancestral property.

Zain’s haunting laughter scares Mehek when he says he has something that can finish Shesh Naagin in one snap.

With a bunch of patriotic soldiers trapped in his old, Zain instructs them to eat anything they want.

These soldiers live for India and can die for India. However, they slowly realize Zain’s reason for feeding them.

These soldiers will be served to Yeti as his meal and exclaim they can do anything for India while they get gobbled up by a hungry Yeti.

Mehek gulps nervously while Urvashi says Yeti will not eat her up since he got his tummy filled by eating the soldiers.

Zain then informs Urvashi and Mehek about his plan to get Shesh Naagin killed by Yeti before she saves Bharat again.

On the other hand, after Rishabh has rested, he starts drinking alcohol, staring at Pratha’s picture.

Pratha is frustrated with herself

Pratha watches Rishabh secretly and questions Lord Shiva why she still cries tears for him when he is the one who killed her baby.

He starts seeing her in two places at the same moment which makes him rub his eyes in utter confusion.

Riya questions Rehan why is he staring at her so bizarrely.

However it is not Riya, Riya is dead, and this is Pratha’s Naagin friend helping her catch Rehan’s lies in front of the police.

Pratha's Naagin friend asks her to seek her Inteqaam as it is a perfect opportunity.

Pratha nods and says she will punish and beat the man who killed his own unborn child, referring to Rishabh.

In the upcoming story of Naagin Season 6 on 17th July 2022, Pratha is all set to seek her second Inteqaam or revenge after she has thrashed Rehan.

So far in the story of Naagin 6, Urvashi and Mehek have joined hands with the terrorists to destroy Bharat.

As per the latest spoiler of Naagin 6, Zain will be showcasing his next weapon to be used against Shesh Naagin to all the terrorists including Mehek and Urvashi in the crowd.

Zain declares if Bharat has Shesh Naagin, he has someone else bigger to fight against her.

According to the upcoming twists of Nagin 6, Zain will call upon Yeti as his weapon against the Sarvashreshth Naagin of Bharat.

Whether Zain has manufactured Yeti in a lab or not is still unconfirmed.

However, it will be very interesting to watch the final episodes of Naagin 6 unravel with Pratha still not over Rishabh and at the same time, being chased by Shakti.

© Copyright tellybest.com, 2022, 2023. All Rights Reserved. Unauthorized use and/or duplication of any material from tellybest.com without written permission is strictly prohibited.
Cached Saved on: Monday 21st of November 2022 06:24:14 PMCached Disp on: Saturday 3rd of December 2022 03:43:31 PM