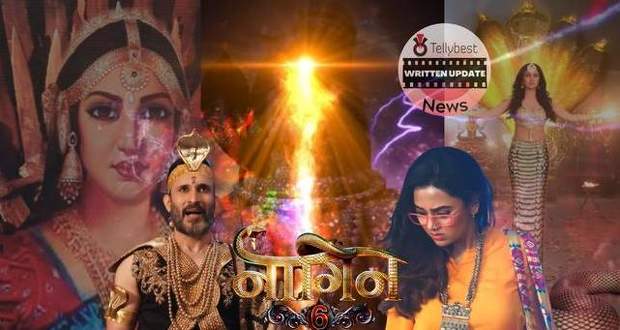 Today's Naagin Season 6 17th September 2022 episode starts with Professor motivating his daughter, Prarthna, to be confident for the job interview.

Meanwhile, Rudra reaches the spot where the minister was attacked and suspects there is somebody behind the attack who is specifically targeting the Indian civil servants.

Prathna reaches the office for the interview where she sees some children on the road.

Being the kind-hearted one, Prarthna helps the children by giving her an umbrella to them.

Rudra, who is there, at the same time, watches the children and goes to help them by giving them his umbrella as well after Prarthna leaves there.

Both Prarthna and Rudra get wet in the rain while Prathna worries about losing the job already before the interview.

Meanwhile, Rudra goes inside his office while talking to his mother about the dinner at the Gujral house.

As Prarthna walks toward the office, she gets attacked by a mongoose whom she hits with her leg in defense, making it die on the spot.

The entire scene gets witnessed by the Maha Sapera (snake charmer) who is passing by there with the employees of the news channel.

Maha Sapera immediately understands that Prarthna is a Naagin while Prarthna remains confused as to why she hit the mongoose so hard.

Further, the Maha Sapera is taken to Rudra’s office for the interview on the channel where he claims that the Shesh Naagin and her daughter exist in the world.

However, Rudra finds it unbelievable but still gives a shot to the interview.

At the Gujral mansion, Anmol tells Rishabh to talk to Rudra and his family about Anmol’s marriage to Rudra.

Pratha convinces Rishabh to talk to Rudra about Anmol and his marriage while Anmol jumps in excitement.

Later, all three, Pratha, Rishabh, and Anmol give a visit to Rudra in his office, accompanied by Mrs. Raichand.

Rudra accuses the Maha Sapera of spreading superstitions and reprimands him when Prathna passes by from there and perceives Rudra as an arrogant man.

Prarthna decides to leave as she doesn’t want to work with a man like Rudra but she cannot leave due to professional norms.

At the same, Pratha enters there with Rishabh and Anmol while Prarthna argues with the receptionist when they do not allow Prarthna entry and exit the office during the shoot.

Meanwhile, Maha Sapera takes it as a challenge and starts playing the flute claiming that he can sense the presence of Shesh Naagin around him.

As the Maha Sapera plays his flute, Pratha’s Naagin Avtaar gets stimulated and her skin starts glowing along with her eyes.

On the other hand, Prarthna also hears the sound of the flute and feels weird sensations in her body.

However, before the Maha Sapera can succeed in catching the Naagin, Rudra throws him out of the office, insulting him.

As the Maha Sapera leaves, he notices Pratha looking at a girl outside the office, whose life is in danger and has come for the interview.

The iron falls on the girl with current flowing through, however, Pratha with the help of a wooden stick holds the iron rod in the air.

Meanwhile, Prarthna comes there and sees the critical condition, saving both Pratha and the girl with the help of another wooden stick in the air.

Both Pratha and Prarthna help the girl to come out of the danger area safely, however, both miss seeing each other due to the smoke.

On the other hand, the Maha Sapera feels joyous about his claims being true and runs to his clan to tell them about the discovery of Shesh Naagin and the next generation of Shesh Naagin.

In the upcoming story of Naagin 6 on 17th September 2022, King Takshaka desperately awaits Prarthna, Pratha and Rishabh's daughter, to come to Nag Mahal on the red full moon day.

So far in the story of Naagin 6, Pratha doesn't want her daughter to be the next Shesh Naagin while Farishta says it is written in the destiny for Pratha's daughter to carry forward the legacy.

As per the latest spoiler of Naagin 6, King Takshaka says Prarthna will come to Naag Mahal herself as it is in her destiny.

However, what will happen when the mother and daughter who both look alike meet each after twenty-one years?

The future episodes of Naagin 6 are going to be interesting as a completely new saga is beginning with surprises and the latest twists, involving new characters like Rudra (played by Pratik Sehejpal), Anmol (played by Amandeep Sidhu), Gaya (played by Kirti Choudhary), etc.