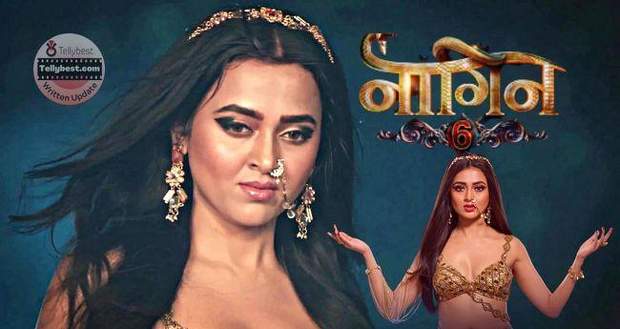 She gets shy while Raghuvir experiences the time of his life.

However, all of a sudden, a strong wind gushes by and Preeti feels as if someone called her name.

Raghuvir tries to calm her and then proceeds to cycle again.

Meanwhile, Meheck laughs out wickedly when she says that the human population now regards the snake population as her enemy when in reality, she is making the bad serpents of the Naga Lok do her bidding.

On the other hand, the good populace of the Naga Lok rushes to King Takshaka, saying he has to beckon Maha Shesh Naagin to protect all of them, otherwise, Meheck will destroy them all.

On the other hand, Preeti and Raghuvir arrive at the bridal photoshoot location as her siblings ask Raghu, how will Preeti look when beautified with makeup.

Raghuvir is not given a chance to speak as Preeti comes from the makeup, wearing a beautiful bridal lehenga with nervousness marking her round face.

Raghuvir imagines Preeti coming to him and holding his hands, as she tells her that she is more beautiful than beauty but it is just his imagination.

She tells Raghu that she cannot do this but Raghu asks her to utter, "she can do this!".

Meanwhile, a servant (sevika) of King Takshaka reaches Meheck and asks her to stop doing whatever she is doing.

Meheck laughs evilly and threatens her if she is going to fight her.

King Takshaka's sevika gets hurt as Meheck wins over her, and urges her to call her Maha Shesh Naagin if she is out there or not.

The sevika painfully utters Maha Shesh Naagin's presence and Preeti feels a wave of hazy memories run through her mind.

When Sevika calls Mahah Shesh Naagin "Ma!" in a plea, Preeti hears Prarthana's voice command her to go to sleep so Maha Sarvasrestha Naagin can come into her being.

Maha Shesh Naagin is NOT Dead!

Prarthana emerges and takes Preeti to the spot where Meheck has held Sevika hostage.

Prarthana takes her snake form and beats Meheck who kept thinking about who could be this powerful Naagin.

She then thinks of putting her magical anklet to her face to see her and when she does, Meheck can only see the side profile of Prarthana until Prarthana attacks her and leaves Meheck unconscious.

Preeti reappears while Raghuvir and her foster siblings try to call her.

As it is nighttime, Preeti tries to locate her way back to the bridal photoshoot area while Raghuvir tracks her phone to get her.

However, Preeti is near Naag Mahal when she hears some familiar ringings, and Prarthana reappears.

The familiar ringing is of King Takshaka and other Naag, Naagins who invoke Maha Shesh Naagin to be a shield for them.

Serpent Queen is Back!

Prarthana walks like a Queen, entering the Naag Mahal as all her humble serpent populace bows down in front of her.

Prarthana informs them that Prarthana as a human doesn't remember any of her past but the essence of Maha Shesh Nagin, which is her speaking currently, will not let anything happen to Naga Lok.

On the other hand, Seema finds Meheck old and dead, lying cold near the Naag Mahal, and makes her wear the anklet again.

Meheck comes awake in a panicked mode and tells Seema she knows Prarthana is near them.

Meanwhile, Raghuvir's phone shows him the location of Naag Mahal and he finds Preeti lying unconscious inside with the yellow flowers on the ground as if an assembly gathered before him.

When Preeti wakes up, she sadly tells Raghuvir how will she gets a job or handle the siblings when she herself does not have any control of her body.

She then reveals that the ashram she & the kids live in is being demolished by the Ahlawat jewelry owner.

Raghuvir goes and talks to his brother to stop the demolition while Preeti takes Kali, one of the foster kids, with her to talk to the owner at Gujral Mansion.

However, Raghuvir meets her outside and asks her to relax because he will talk to him.

Inside, Raghu tells his brother to stop the demolition at any cost while Meheck smiles wickedly, looking at Raghuvir's desperation.

Meanwhile, Preeti stands in front of the bulldozer to stop the demolition as her foster siblings ask her not to do so.

Raghuvir then arrives and tells the demolition officials that the orders have been taken back and offers Preeti & the kids to stay in the guest room for the night as because of the orders, they cannot sleep inside the Ashram yet.

Preeti suggests that they make a tent outside and light the fire as the kids help her make tents and snuggle inside.

She then asks Raghuvir to go back as well due to the cold, but he says he cannot leave her like this.

Raghu offers Preeti an ice cream to eat and both of them enjoy the cold with the cold ice cream.

However, the strings of Raghu's heart starts to play again as Ek Ajnabi Haseena song rings in his head.

He watches Preeti how she  licks her lips after licking the cream of the ice cream.

Seeing the chocolate smudge on her upper lip, Raghu tries to wipe it off while Preeti looks at him strangely.

In the upcoming story of Naagin 6 on 18th December 2022, Raghuvir gives Prarthana an opportunity to pose as a bride for Ahlawat Jewellery.

So far in the story of Naagin 6, Meheck is impatient to find Prarthana as she has to steal the nine Naag Manis from her.

According to the latest spoiler of Naagin 6, Meheck will find out that the girl Raghuvir was painting is Prarthana herself.

Meanwhile, King Takshaka along with other Naag & Naagins remember Maha Shesh Naagin as Meheck makes the atmosphere troublesome for them.

Preeti will get awakened as Prarthana and go to fight Meheck who is still not ashamed of her actions.

Let us see how this new updated version of Maha Sarvasreshta Shesh Naagin slays her enemies and live her life happily ever after that in the future episodes of Naagin 6.