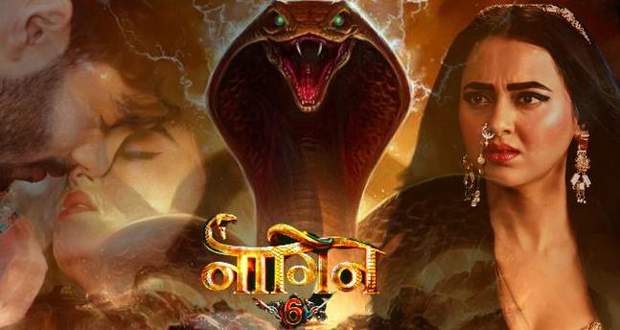 Today's Naagin 6 18th June 2022 episode starts with Pratha crying and noticing the anklets that she had given to the girl before coming to the cremation place.

Taking those anklets in her hands, Pratha wonders if it is some sort of sign that Lord Shiva wants her back in the Naag Mahal.

Meanwhile, Meheck is rejoicing over her victory in killing Pratha’s unborn baby and confesses how the jailor was involved with her.

At the same time, Pratha reaches the Naag Mahal and overhears Meheck confessing her deeds in front of Bholenaath.

The confession leaves Pratha stunned and the declaration by Meheck that she and Urvashi will rule over the world and universe, makes Pratha run forward.

However, not being a Naagin anymore, Pratha is stopped by the other Nagas.

Seeing the truth unveil and feeling powerless, Pratha runs out of the Naag Mahal with tears flowing down her eyes.

As Pratha burns in her rage, her surroundings set out on fire as well with the world experiencing disasters all over.

Elsewhere, Shiv Ji does Tandav as Pratha’s agony-filled cries reach his ears that question him how he let the wrong win over right.

Pratha swears on the Universe that she will gain her Shesh Naagin powers back and return again to avenge her child’s death and thereafter goes back to the Shiv temple.

On the other hand, Meheck wakes up to find Rishabh working till late.

As she questions him, Rishabh replies rudely to her which makes her forehead wrinkle at his odd behavior.

Meheck retorts that he had never given money this much value when he was with Pratha.

Rishabh claims that he wants to earn that much money, his father and grandfather didn’t earn their entire lives or even imagined it.

Further, Meheck meets Urvashi and tells about Rishabh’s behavior while Urvashi asks her to ignore and help her with her new plan.

Urvashi tells Meheck about her partner who lives in Chingistan and wants to harm Hindustan and for that, they want Shesh Naagin’s help as their lives are in danger.

Meheck agrees to help and as asked by Urvashi goes to the Indian border at night with her.

Pratha wants her Powers back

Meanwhile, Pratha meets Farishta at the Shiv temple and asks him why he made Meheck the Shesh Naagin despite knowing her deeds.

Farishta tells Pratha that it’s Niyati (Fate) that made Meheck the Shesh Naagin.

Aggravated, Pratha announces that now her Niyati will make her Shesh Naagin back again and asks Farishta to give her powers back of the Shesh Naagin.

Farishta tells Pratha that she had renunciated her powers that made Meheck Shesh Naagin and now she can’t get her powers back.

However, Farishta also tells Pratha that if Meheck gives up on her powers by saying it three times before the Universe, then only Pratha can be a Shesh Naagin again.

Meheck meets Urvashi’s partner, Zain, at the Indian border, and while reaching she has killed many armed officers by misusing her powers.

Zain tells that he needs land in India to execute his plan for which Urvashi asks Meheck to inquire about it through Rishabh.

After the meeting as the two return home, they notice all the ladies of the house looking at some gold jewelry that Rishabh has brought.

Rishabh states that he will gift this jewelry to his client’s wives who are coming for dinner at their house.

Meheck calls out Rishabh for bribing his clients to get the contract and states he wasn’t like this before.

Rishabh counters back saying that a lot of things are not the same as before.

Meheck’s life is in danger

At the same time, Meheck is called by Farishta for an urgent meeting.

Farishta tells Meheck about the upcoming danger, Yeti who is going to attack the Kailash Parvat in the next 3-4 days.

Meheck gets scared when asked to fight Yeti who is not an ordinary animal and worries about her life instead.

Farishta tells Meheck about how Pratha saved the country when she was the Shesh Naagin and now it’s Meheck’s turn.

Moreover, Yeti won’t return without fighting Shesh Naagin as he is here, especially for her.

Later on, Meheck returns home scared that Yeti might kill her and shares her fears with Urvashi who tells her to fight Yeti.

Urvashi is currently concerned about her gains from Meheck.

At the same time, Rishabh asks Meheck to come along with him to his client's place to give him an invite.

On their way, a lady asks them for the lift to Uttaranchal hills which frightens Meheck as Yeti is coming from that way only.

However, Rishabh agrees to give lift while the lady tells them she is an astrologer.

Meheck shows the lady her hand who tells her that her death is near and thereafter everything will become easy.

Angry Meheck asks Rishabh to stop the car and makes the lady exit it.

In the upcoming story of Naagin Season 6 on 18th June 2022, the mystery behind a locked room inside Gujral Mansion is going to be revealed.

So far in the story of Naagin 6, Mehek has become the Sarvasrestha Naagin and wants to conquer the world with the help of her Maasi, Urvashi.

According to the latest spoiler of Naagin 6, a new character will also enter the serial Nagin 6 by the name of Yeti who will be after Pratha's blood.

At the same time, Pratha will try to end her life by lighting herself on the burning pyre.

However, when she sees Mehek happy and become the Shesh Naagin, Pratha swears that she will seek revenge from Mehek and return as Shesh Naagin herself.

Let us see how Pratha regains her Shesh Naagin powers back and emerge stronger than ever to seek her Inteqaam from the perpetrators that ruined her life in the future episodes of Nagin 6.