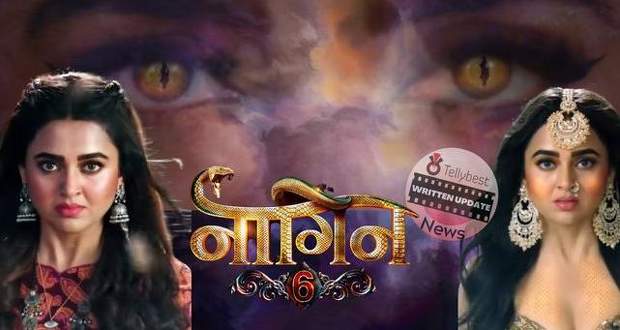 When Pratha turns around, Prarthana runs towards the office room for the interview so Pratha misses seeing Parthana’s face.

Prarthana goes to Rudra’s office room for the interview. However, during the interview, Rudra gets a call from Anmol and gets busy with Anmol.

As soon as Rudra cuts the call, he tells Prarthana that she will get the job as she has saved a person by risking her life.

Hearing this, Prarthana gets happy and leaves the room.

At the Gujral mansion, Pratha worriedly starts closing all the windows frantically to stop the Moon rays from coming in.

She even orders Anmol not to go out this night much to Anmol’s irritation.

Anmol tries to protest but Rishabh urges Anmol to stop.

Later, Rudra and his family arrive at the Gujral mansion for the dinner.

When Mrs. Raichand asks for Pratha, Anmol informs her that Pratha is busy doing a special puja.

While Pratha’s yellow skin is coming out of her body, Mrs. Raichand goes to check on her.

However, before Mrs. Raichand can open the door, Pratha comes out of nowhere and escorts her back to the dinner table.

Meanwhile, Rudra narrates the story of Maha Sapera (Snake Charmer) to Pratha and others.

Seeing Rudra making fun of Nagin, Pratha gets angry and urges Rudra not to make fun of someone’s belief.

With Pratha’s sudden outburst Rudra gets suspicious and decides to take an interview with the Sapera.

Rudra then calls Prarthana and orders her to take the interview of the Sapera.

At first, Prarthana denies it but when Rudra starts pressurizing Prarthana, she agrees.

When Prarthna arrives near the forest, she collides with Patali who urges Prarthana to go to a nearby temple.

Later when Parthana arrives in the cave, the Saperas surround her with snakes.

The Maha Sapera starts playing Nag Been and Prarthana starts feeling weird sensations in her body.

However, Prarthana somehow frees herself and runs away from there.

On the other hand, Patali arrives in another cave and informs Urvashi about Prarthana’s arrival here.

Hearing this, Urvashi starts laughing like an evil as she is sure the Saperas will take Naagin’s powers from Prarthana and her heir will become the next Shesh Naagin.

Meanwhile, in the Gujral mansion, Pratha gets a call from the Professor who informs her about the anti-national attack on the Minister.

However, Pratha quickly denies it by announcing that neither she nor her daughter will go that path again.

When Pratha returns to the table, she asks Rudra to say yes to marrying Anmol but Rudra denies it by claiming that he only loves his work.

Hearing this, Anmol starts crying while Rishabh starts yelling at Rudra for breaking his daughter’s heart.

However, Rudra and his family walk away leaving Pratha worried for her daughter.

On the other hand, Prarthana arrives in the Nag Mahal and feels as if she has been there.

While Prarthana is roaming around the Mahal and looking through stuff, she feels she knows this place.

At the same time, Sapera arrives there with his clans and orders them to open all the windows.

Before Prarthana can understand, she starts feeling a burning sensation in her body due to the moon’s rays.

Listening to the tune, Prarthana starts dancing and her skin turns yellow.

When Prarthana falls near the stairs, she screams Maa and Pratha somehow feels she heard someone calling for her.

In the upcoming story of Naagin 6, Prarthna is going to grace her real form of a Shesh Naagin in the Naag Mahal when the red full moon rays fall on her.

So far in the story of Naagin 6, Pratha and Prarthna come face-to-face. However, the oblivious daughter and mother duo do not see each other.

On the other hand, Saibo who is Seema's mother, an Asur, is eagerly waiting for the red full moon night to arrive.

As per the latest spoiler of Naagin 6, Prarthna will be pulled toward the Naag Mahal by herself where 'Saperas' will be waiting for her to awaken the cosmic energy inside of her.

Prarthna will start dancing to the tunes of the snake charmer's flute by herself while they open the doors for the rays of the moon to fall on her.

Let us see how Prarthna's transformation as Shesh Naagin takes place and also encounters her real mother, Pratha in the future episodes of Nagin 6.

© Copyright tellybest.com, 2020, 2021. All Rights Reserved. Unauthorized use and/or duplication of any material from tellybest.com without written permission is strictly prohibited.
Cached Saved on: Saturday 1st of October 2022 09:03:46 PMCached Disp on: Sunday 2nd of October 2022 01:11:19 PM