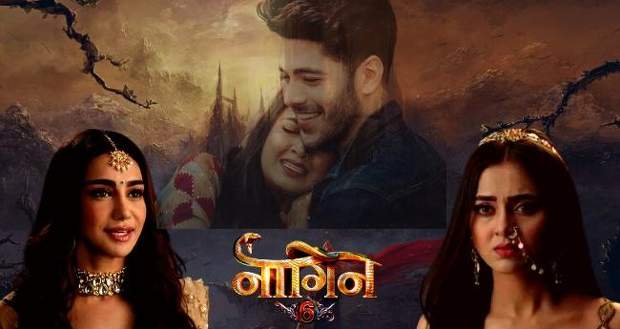 Mehek is already scared to see Yeti as all the news channels are airing live news about Yeti.

Meanwhile, back at Gujral House, Urvashi and Reem are searching for papers that mention Rajesh Pratap Singh.

As Rishabh and Mehek reach Uttarakhand, they go to Rajesh Pratap Singh's House.

However, his servant informs Rishabh that Rajesh Singh had to leave due to an emergency.

Rishabh frowns and says he came to invite Rajesh to Delhi personally but he did not even bother to call. His servant informs that it is not Rajesh's fault as he tried to call but the weather conditions were bad.

As Rishabh and Mehek have already arrived, Rajesh's servant offers them to stay for the night as the weather conditions are bad and not fruitful enough to travel back to Delhi.

Mehek fears her life as she prepares to go to bed. However, the winds are so strong that she is not able to sleep peacefully.

Mehek suddenly hears Yeti's scream and goes outside to confront him.

Mehek transforms herself into her Shesh Naagin avatar but is nothing in front of Yeti.

Yeti defeats Mehek up in the air as she screams.

However, it is just a bad dream as Mehek wakes up and goes to check outside whether Yeti is there or not.

As Mehek goes outside, she sees Yeti who is indeed looking for Shesh Naagin.

Mehek is forced to fight Yeti but he easily lifts her in the air.

Mehek screams for her life and begs Yeti to put her down.

Invoking grace and throwing her Shesh Naagin Naag Mani away from her abdomen, Mehek begs Yeti for forsaking her life as she is no more a Shesh Naagin.

Yeti leaves Mehek who is scared to death as she picks her Naag Mani from the ground.

On the other hand, Pratha goes to the Himalayas to meet Yeti.

Pratha speaks respectfully to Yeti, unlike Mehek who cannot function as a Shesh Naagin.

Pratha tells Yeti that she is Shesh Naagin, Naaaginon ki Naagin, and the one Yeti has been looking for.

Pratha joins her hand in respect as she knows it is Farishta who has taken Yeti's form to remind Pratha of her unfulfilled destiny.

Mehek is no longer a Shesh Naagin

Yeti AKA Farishta blesses her as Pratha regains back her powers.

When Yeti was fighting Mehek and she dropped the Shesh Naagin Naag Mani on the ground, Pratha picked it up and replaced it with an ordinary one.

Meanwhile, on a roadside, the policewoman who troubled Pratha inside the jail asks a lady vegetable seller to pack fruits for free.

When the lady vegetable seller begs for money because her daughter is sick, the brutal policewoman pushes her to the ground. Pratha helps her get back on her feet and gives her money.

As the policewoman drives back home, she sees Pratha walking on the road and gets scared as Pratha was hanged to death.

Announcing she is Shesh Naagin herself, Pratha throws fireballs at her car as she was involved in killing Pratha's baby.

Walking proudly and finally embracing her natural powers gifted to her by destiny, Pratha walks undefeated.

Meanwhile, as Rishabh drives back to Delhi with Mehek in the passenger seat, he sees a lady walking on the road who does not respond to Rishabh's honking.

It is Pratha walking in her golden attire. As soon as Rishabh's car whisks by, Pratha disappears leaving Rishabh stunned and Mehek scared.

Mehek thinks that it was Yeti who appeared as a woman to kill Mehek.

All the crimes that Pratha was subjected to are experienced by her through memory as her mind replays the look on Mehek's face when she handed an innocent Pratha over to the police.

Pratha knows the killers of her baby

Pratha asks Mahadeva to shower the faces of the people who killed her baby.

Lord Shiva shows the faces of five people who killed Pratha's baby. It is Rehan, Vihaan, Ritesh, Mehek, and Rishabh.

Throwing the bhasm all over Lord Shiva, Pratha swears to kill all of them as Shesh Naagin's Inteqaam is always successful.

On the other hand, Chanda remembers Pratha's birthday and wishes her as she lights a lamp in front of Pratha's photograph.

Meanwhile, Urvashi taunts Mehek that she is not able to do anything about Zain despite being Shesh Naagin.

As Pratha's jail mates wait for Pratha's arrival, they send one of their friend's daughters to look for Pratha. However, a group of drunken men eye the girl lustily as she searches for Pratha. They wait for Pratha to arrive so they can tease and molest her.

When Pratha arrives, the leader of the drunken goons asks Pratha to hug him.

Pratha agrees innocently but when she goes to hug him, she uses her powers and makes it look as if the man pushed her away.

When the leader says he saw Naagin, Pratha laughs and changes into her grand Shesh Naagin avatar.

Pratha says that men always ask a woman to change her personality as per their needs. However, when a woman fights for her rights, they are quick to say she's a Naagin.

In the upcoming story of Naagin Season 6 on 19th June 2022, Mehek will be asked to fight Yeti who is no ordinary animal as she is the Shesh Naagin now.

So far in the story of Naagin 6, Mehek is enjoying her new powers as Shesh Naagin but she doesn't have the courage as Pratha did.

Meanwhile, Pratha vows that her destiny will crown her as Shesh Naagin again, replacing Mehek who did not hesitate to betray her little sister.

As per the latest spoiler of Nagin 6, Mehek will become a scaredy-cat to fight Yeti who is coming to Kailash Parvat. At the same time, Pratha will be summoned by Farishta to fight for her rights and she will return to seek her revenge against both Urvashi and Mehek.

Let us see how the future episodes of Naagin 6 portray the comeback of Pratha and her fight to seek justice and give Bharat the serpent queen it deserves.

© Copyright tellybest.com, 2022, 2023. All Rights Reserved. Unauthorized use and/or duplication of any material from tellybest.com without written permission is strictly prohibited.
Cached Saved on: Monday 21st of November 2022 06:05:35 PMCached Disp on: Monday 5th of December 2022 12:33:15 PM