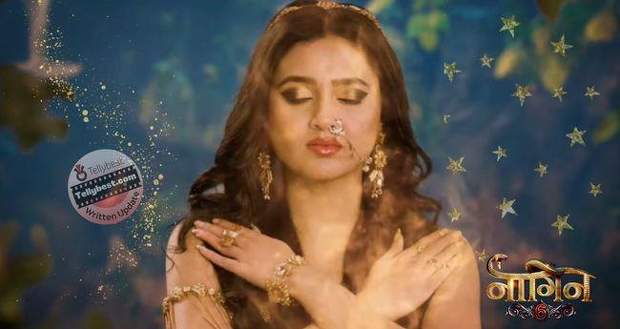 Today's Naagin 6 19th November 2022 episode starts with Anmol, Urvashi, Patali, and Mr. & Mrs. Raichand laughing over Pratha & Prathna as they are finally out of their lives.

However, Anmol is just pleased that she has got Rudra with her now.

Just then Rudra also comes & Anmol asks him where he is going.

On the other hand, Ritvik with whom Anmol did her fake engagement comes to the Gujral House, announcing that he wants to meet Anmol right now.

He shouts but Sayali (Reem's daughter, Urvashi's granddaughter) tries to make him understand that Anmol doesn't love him.

Rudra asks Ritvik to behave a little since Anmol is his fiance now.

Sayali comes to drop Ritvik out and he asks her out on a date. Thinking of how Urvashi would react, Sayali says yes to Ritvik's proposal and decides not to tell Urvashi about it.

However, Ritvik is not Ritvik but Pratha in his disguise.

Later, Urvashi catches Sayali going out with Ritvik & immediately thinks this is Prathna in disguise.

She follows them out and threatens Ritvik with the Naag Mani & puts it to his forehead.

Ritvik says nothing will change with this shining stone while Urvashi grabs Sayali's hand forcefully and heads toward Gujral House.

Just then, Ritvik gets surprised when he sees the same, exact-looking person in front of him & asks who is he.

Prathna emerges and asks Ritvik why he ruined her plan by going to the Gujral House at the same time as her.

Ritvik surprisingly replies to both Pratha & Prathna that he is here for the same purpose as they are.

He takes them to jail and reveals that he is Rajesh Pratap Singh's son.

Pratha feels shocked & sorry both as Ritvik states that in the end, even Pratha, the justice monger, believed the villains in the story.

On the other hand, Urvashi gets slapped by Patali who says how could she go with this precious Naag Mani outside.

Later, Suhasini sees Ritvik sad and asks him if he likes any other girl after his broken marriage with Anmol.

Ritvik takes Sayali's name and Suhasini feels happy, saying she will ask Urvashi about it.

However, Pratha & Prathna take Urvashi and Patali's form and makes it seem like they will kill Ritvik.

Suhasini hears this and gets angry.

The same strategy is applied to Urvashi who is on the terrace. Pratha & Prathna take Ritvik & Suhasini's form and say they want to ruin Sayali's life.

Real-life Urvashi & Suhasini feel angry at each other and meet on a lonely road. However, Suhasini pushes Urvashi down & threatens to kill her with a gun.

Just then, Patali hits Suhasini's head with a rod and saves Urvashi who shoots Suhasini at the end.

After Patali & Urvashi leave, Ritvik, Pratha, & Prathna come near Suhasini's body as she begs for life.

Pratha asks Suhasini if this is the result of her bad deeds.

Later, Pratha & Prathna get into a banter where Prathna asks whether she is Pratha's daughter or not as she keeps crying.

Pratha jokes, saying she was wondering the same thing since Prathna cries so much.

Prathna thinks about Rishbah's condition while Pratha asks her daughter to be strong since their life is not ordinary.

Meanwhile, Rudra dreams about Prathna and his moments with her but his parents disturb his daydream.

They tell him that his marriage with Anmol needs to be done fast.

After Rudra leaves, Mr. & Mrs. Raichand talk about getting their share of the Naag Mani once Urvashi sells it in the International Market.

On the other hand, Pratha dreams about going to a random place and getting surrounded by black snakes all over who are ready to attack her.

In the upcoming story of Naagin 6 on 19th November 2022, Pratha & Prathna will find the Kaliya Nag!

So far in the story of Naagin 6, Pratha reminds Prathna of her sole duty of discharging justice to the Bharat nation as Shesh Naagin.

According to the latest spoiler of Naagin 6, Pratha & Prathna go to find the Naag Mahal to unravel the mystery of Asuras and Naagins generations back.

They have to cross a sea of "Ichneumons" or Nevalas which are old enemies of the Naagin clan.

They will also kidnap Rudra's parents as they have shaken hands with the enemies of the nation.

However, as per the upcoming twist of Naagin 6, Prathna gets held hostage by the Kaliya Naag.

Will Pratha be able to save her daughter who gets attacked right in front of her eyes?

Let us see how Pratha & Pratha do this mission together in future episodes of Naagin 6.

© Copyright tellybest.com, 2022, 2023. All Rights Reserved. Unauthorized use and/or duplication of any material from tellybest.com without written permission is strictly prohibited.
Cached Saved on: Monday 21st of November 2022 11:23:58 PMCached Disp on: Monday 5th of December 2022 12:16:04 AM