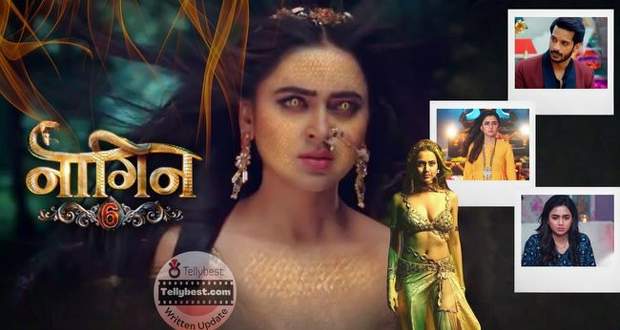 Today's Naagin 6 1st January 2023 episode starts with Raghuveer dancing with Preeti after confessing to her that he loves her.

He feels the emotional pain of marrying someone else, however, he suddenly is snapped out of his reverie and realizes that he was imagining everything.

Preeti comes into his room and appreciates his singing and guitar playing skills while Raghu says pain can make people do so many things and even brings out the creativity inside of them.

Preeti offers to clean his fingers that are oozing blood due to hitting the strings hard.

Preeti tells him that it is her last day in this house and Meheck hears this and worries about the Naag Manis.

Later, in the day, Preeti's foster siblings find an old saree and urge Preeti to wear it.

Little does she know that it is her mother's (Pratha's) saree.

A moment of time is locked as Preeti sees a hallucination of Pratha and gets shocked to see she has the same face.

Wearing the same saree, Preeti decides to walk out and ask people around whether they have seen her here in the past or not.

Preeti asks street vendors whether they have seen her before or not & almost everyone denies.

One of the kidnapper who kidnaps young girls sees Preeti and lies that her name is Sudha and she is used to go to the Naag Temple with her parents.

An innocent Preeti beleives him as he offers to take her to her parents.

Meanwhile, Seema and Meheck are talking about how to gather those nine manis and in a jerk, Meheck accidentally throws the anklet away.

Preeti's youngest foster sibling (a girl) sees it and screams "Chudial!" as without the anklet, Meheck's beauty is gone.

She grabs the anklet and runs on the stairs while Seema tries to make her understand that Meheck aunty doesn't have any makeup on.

However, the little girl grabs Vinay's hands who is descending and says Meheck aunty is a chudial now.

Seema then throws a white powder at Meheck and Vinay laughs, saying now he understands why the little girl said she looked like a chudail.

Meheck tries to scare her off in good humour in front of Vinay and snatches the anklet from the little girl.

Meheck then goes out to find Preeti as she is aware this is the day when Prarthana's nine manis won't work and she is the weakest.

One of the street vendor informs Meheck when she shows her Preeti's photo, that this girl has gone toward the jungle.

Meheck finds an unconscious Preeti being taken away by a bunch of goons.

One of the lewd goon holding Preeti flirts with Meheck and asks her to come with them, saying "Ghoomenge, firenge, naachenge, gayenge" (we will roam around and dance and sing) and Meheck finishes this old Bollywood dilaogue by uttering "Aur Kya?" (And what?).

She transforms into a Naagin and kills all of them.

She then looks at Preeti who is lying unconscious on the ground and begins to kill her until Seema interrupts her.

Seema addresses Meheck as Neeli Naagin, and informs her that she cannot derive those 9 manis until Prarthana herself gives it to her.

Meheck brings Preeti back at Gujral Mansion and says she is there for her, while Seema calls her a shop of overacting.

The groom, Raghu, sees Preeti walk in a blue saree and gets awestruck while Meheck ties Ananya and then runs to Preeti, saying Ananya is having an affair.

Preeti Gets Married to Raghuveer

She manipulates Preeti to dress up as the bride and sit in the mandap to save the Ahlawat family's reputation.

Preeti sits in the Mandap and gets married to Raghu until Ananya descends and says she has been betrayed.

Mrs. Thakral, Ananya's mother, puts fire around the Mandap angrily while Preeti relives those hazy flashbacks when she was about to get married to Rudra.

She faints as those flashbacks come clear and she sees Pratha, Rishabh, and Rudra being killed by Meheck through a knife.

Raghu picks up a fainted Preeti and takes her upstairs where she wakes up with a scream.

In the upcoming story of Naagin 6, Meheck will make a ploy to trap Preeti and steal her Naag Manis!

So far in the story of Naagin 6 on 1st January 2023, Sonya & Gautam get married while Meheck plots with Seema to attain the grand nine manis inside of Preeti (Prarthana).

According to the latest spoiler of Naagin 6, several kidnappers will kidnap Prarthana and take her to the jungle.

There Meheck will take the next lead and take out her magical knife to derive those powerful Naag Manis out of the Maha Shesh Naagin who is lying unconscious on the ground.

Somewhere, King Takshaka is seen saying that nobody should hurt Prarthana today as her powers will be very weak and the Maha Shesh Naagin inside of her wouldn't awaken.

On top of that, Preeti also sees Pratha, however, whether it is imagination or reality, nobody knows.

Let us see whether Meheck kills Preeti as she lies defenseless or if some miracle happens to save the Serpent Queen in the future episodes of Naagin 6.