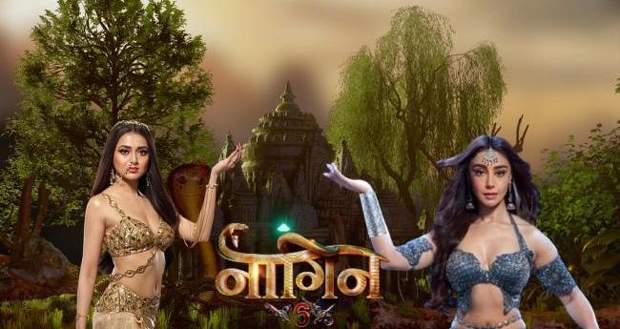 Today's Naagin Season 6 1st May 2022 episode starts with Pratha feeling sick in her stomach to see Seema lie so smoothly to Rishabh.

Seema brings both Pratha and Rishabh to a Balaji Temple, and not the Bhairav Nath Temple as she promised.

Seema tricks Pratha like this because being a Naagin, Pratha cannot enter a temple that is guarded by ‘Garuda Dev’.

Pratha makes an excuse to Rishabh that she will enter the temple later after she buys some flowers for the deity.

Inside the temple, Seema feigns to have a headache and asks Rishabh to bring a glass of water for her.

Seema instructs Rishabh to exit the temple via the backdoor in front of which is a well.

Seema instructs the person on the call to finish Rishabh as soon as possible.

On the other hand, Pratha gets worried when Rishabh does not come out of the temple.

Suddenly, a white snake crawls toward Pratha and Mehak and both of them follow it.

The snake leads Pratha and Mehak to the backdoor of the temple where Pratha encounters Seema.

Seema taunts Pratha for arriving so late and tries to remove the sindoor adorning Pratha’s forehead.

However, Seema’s efforts go futile and her nails scratch Pratha’s skin due to which blood replaces the sindoor in her forehead.

With a vile back and forth, Pratha leaves in search of Rishabh and instructs Mehak to follow Seema.

Pratha follows the prints left behind the tyres of the van in which Rishabh was carried.

Pratha encounters Rishabh being held hostage by the goons.

Rishabh is not fearful and keeps repeating that he won’t let anything bad happen to Bharat.

When Pratha speaks in front of the goons, Rishabh gets stunned and yells at her to leave the place.

Pratha catches a gun in her head and aims it at one of the men.

However, the gun contains only one bullet after which the goons threaten to kill both Pratha and Rishabh.

Pratha considers transforming herself into a Naagin avatar but goes against it.

Seema visits a lady she has locked up

On the other hand, Mehak follows Seema going into a dark, abandoned house.

A lady, with a toy baby in her hand, is heard singing lullabies to it.

Seema has the lady locked inside for several years.

Seema opens the door and asks the old lady to stop her ugly singing.

Seema snatches the toy baby from the lady’s hand and shoves it into the fire lit nearby.

Seema asks the woman forcefully to tell her the truth about something.

The woman shakes her head negatively.

The lady is fearful of Seema’s presence and gets mentally disturbed to see the toy baby being burnt in the fire.

Meanwhile, a shaking occurs on the ground which knocks Rishabh unconscious.

The goons tremble on the ground and Pratha realizes that it is Mehak who is here to help her.

Pratha takes the form of Shesh Naagin and powerfully invokes the snakes of her clan to finish all the goons.

Pratha is livid because this time, the threat has been placed on her husband whom she loves dotingly.

Several snakes of Pratha’s clan come immediately and kill all the goons on the spot.

Pratha takes Rishabh home safely and both of them discuss the incident that occurred.

Rishabh tells Pratha to leave the town along with Seema.

Pratha refuses and tells Rishabh that she won’t be leaving him alone anytime soon.

Rishabh then talks about Seema’s birthday the next day and how he wants to make it special.

Pratha gets a hint

Pratha then asks Rishabh about his childhood photos.

Rishabh tells Pratha that Seema somehow doesn’t let Rishabh see his childhood photos because he used to be afraid and meek in his childhood.

Pratha hugs Rishabh as he becomes emotional about Seema.

He tells Pratha that Seema used to sing lullabies to Rishabh and he misses it.

Rishabh then informs Pratha that his childhood album must be in the storeroom.

Mehak tells Pratha that she heard a lady sing a weird-sounding lullaby.

Both of them go into the storeroom to check Rishabh’s childhood photos.

All the photos that Pratha and Mehak encounter is of Rishabh about fifteen years old and not of before.

This makes Pratha’s mind itch with lots of questions.

Pratha then discovers a photo of a lady with a young Rishabh standing nearby her.

Pratha requests Mehak to take her to the abandoned house as she has a big surprise awaiting Seema.

Seema is scared of Pratha

The next day, Pratha is all ready to stun Seema out of her wits.

Pratha brings a chocolate cake for Seema to cut.

Rishabh looks at Seema expectantly as Pratha offers a cake bite to Seema but Seema is suspicious of Pratha mixing something into it.

Pratha can read Seema’s mind and tells her mother-in-law candidly that there is no poison mixed in her cake.

Pratha then volunteers to take a bite of the cake first and secretly shows her fangs to Seema to scare her.

Seema then asks Lalit to try the cake. But Lalit leaves the scene, making a stupid excuse.

With no choice left, Seema hurls the cake on the floor by accident and eats a fresh bite, making Rishabh confused.

Later, both Mehak and Pratha visit the lady in the dark, abandoned house.

When Pratha hears the lullaby out of her mouth, Pratha realizes that the lady is Rishabh’s mother.

Even her face matches the woman in the photograph Pratha is carrying.

When Pratha tries to touch her feet, Rishabh’s biological mother drags her feet away in fear.

Pratha and Mehak’s eyes line with a tear as they watch the years old trauma still haunting Rishabh’s mother.

Pratha promises her that she will reunite her and Rishabh and no one will be able to prevent it.

Meanwhile, Rishabh looks for Pratha in the house.

Seema already communicated with the doctor to give Rishabh a shot that will kill him.

Lalit tries to sway Seema’s mind but Seema is adamant to kill Rishabh.

When Seema bumps into Rishabh searching for Pratha, she tells her that the doctor has arrived to give him a painkiller shot.

As soon as the doctor is about to inject Rishabh, Pratha arrives and screams purposefully.

She then pushes Seema to the floor and acts surprised.

Pratha then coaxes the doctor to give Seema the painkiller shot first.

The doctor has no choice but to oblige.

However, Pratha whispers into Seema’s ears that it is no poison but medicine that will make Seema drowsy.

When everyone has gathered for Seema’s birthday party, Pratha unveils the collage she made with the photographs kept in the storeroom.

Seema’s eyes widen despite the drowsiness and her heart skips a bit.

Lalit gets surprised too as to how was Pratha able to enter the storeroom.

Pratha then dances with Rishabh to portray the love story of Lalit and Seema.

However, Seema does not enjoy it, rather her heart keeps getting filled with fear as to what is to come.

When Seema flicks her eyes upstairs, she is shocked to see Rishabh’s biological mother watching her freed open after many years.

As per the latest promo of Naagin Season 6 on 1st May 2022, Seema will be looking for ways to kill Rishabh.

However, Pratha will team up with Mehak to find out the reason why Seema wants to kill Rishabh.

As per the upcoming story of Naagin 6, Pratha and Mehak will realize that Seema is not the real mother of Rishabh.

Rishabh's mother is someone who has been locked by Seema for years and is on the verge of becoming mad.

Pratha will ask Mehak about the woman she heard singing lullabies.

After finding out the location of Rishabh's real mother, Pratha will bring her to the Gujral House.

Pratha feels giddy to surprise Seema by bringing someone who has answers to Seema's dark, mysterious, and evil past.

How will Seema react to this?

Let us see what Pratha has in store for Seema and what twists and turns manoeuvre the story of Naagin 6.

To get to know more, download Naagin 6 all episodes or watch online today's (1 May 2022) latest episode, go to voot.com