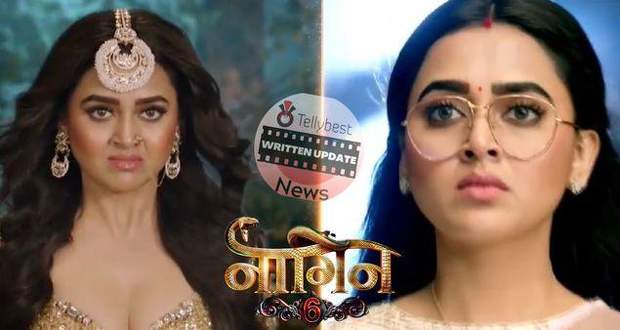 Today's Naagin 6 1st October 2022 episode starts with Rudra getting surprised when he sees the lift stop by itself but it is Prathna who stops it with her Shesh Naagin powers unconsciously.

Elsewhere the Professor scolds Suhasini for putting a fake personality of being a social worker.

He claims that Suhasini changed the babies and now he cannot even tell Prathna that she is not his daughter.

At the time same time, he says he cannot even get his actual daughter back since she considers Rishabh and Pratha to be her parents.

Meanwhile, Prathna wakes up, finding herself on the stairs, and says she doesn’t know how she reached here.

At Gujral House, Anmol gets teased by her friends for finally having found her Prince Charming Rudra.

Pratha calls Anmol to a side and asks her what kind of snake she saw when she was rescued and Anmol says it was a big snake, not a small one.

Back at Gujral Mansion, Rudra arrives there making Anmol’s eyes light up.

However, he goes upstairs to change and thinks of Prathna and how she got shy when he was shirtless in the office.

Similarly, Prathna thinks of Rudra but gets surprised when she sees a guy with his parents waiting for her.

Prathna argues with Jeet saying she wants to do her job but Jeet tells Prathna he wants to see her become Dulhan before she dies.

He fixes Prathna’s engagement with the guy but Rudra is in the back of her mind.

On the other hand, Suhasini visits Rudra and Anmol’s engagement and asks Pratha why she didn’t invite Jeet, subtly saying that Anmol is like Professor’s daughter.

Elsewhere, a goon attacks the Professor and Prathna’s avatar begins to change as she transforms into Shesh Naagin, scaring the goon away.

Jeet tells Prathna she is a Naagin and that is why she should get married and run away.

He almost spills out that Prathna’s mother was a Nagin but stops in between, making Prathna die with the curiosity.

In the meantime, Rudra and Anmol get engaged while Rishabh eyes Rudra with disgust.

Rudra is infatuated with Prathna

Anmol’s girlfriends ask Rudra and Anmol to play a game and to reveal what face they see with their eyes closed.

Anmol happily announces that she sees Rudra but Rudra is hesitant as he only sees Prathna.

At Prathna’s house, Professor shows Prathna his room for the first time and tells him that all these attacks that are happening currently are not random.

He asks Prathna not to indulge in all this and should get married right away.

However, Prathna is keen to know what is her connection with the Naag Mahal.

Back at the engagement, Tina, Anmol’s friend accidentally knocks down the table containing gifts and Anmol asks the servants to keep the gifts in the storeroom.

There, Anmol finds Mehek’s photograph, and Pratha reveals that it is Anmol’s aunt.

She further adds that Mehek married Rishabh but all this talk is meaningless right now.

Meanwhile, Prathna arrives at the Naag Mahal alone where King Takshaka greets her to do Maha Navratri Puja.

Prathna asks Takshaka who used to do this Puja 21 years ago and he says it was her mother.

Pratha gets clues from Lord Shiva

Prathna begins with the Puja while Pratha walks toward the Naag Mahal to pay her gratitude to Shiv Ji for saving Anmol’s life.

She realizes that it is Maha Navami and that is why the Mahal is so decorated.

Inside, Prathna’s eyes turn golden as soon as she gazes at Lord Shiva and turns into Shesh Naagin.

Pratha walks into the Naag Mahal and finds her Nani’s anklets missing.

Prathna is outside and looks at the sky, saying she is inevitably connected to this Naag Mahal irrevocably while holding her great-grandmother's 'payal' in her hand.

Inside, Pratha pays her allegiance at the feet of Lord Shiva, urging him to show the face of the Naag or Nagin who saved Anmol but she only sees her reflection, getting confused.

In the upcoming story of Naagin 6 on 1st October 2022, Prathna will get attacked by a boar while Pratha reaches the ancient Naag Mahal to urge Lord Shiva to show her the face of the new Naagin.

So far in the story of Naagin 6, Prathna becomes the next Sarvashreshth Naagin but Pratha doesn’t know anything about her.

Wanting to dig deeper into the truth, Pratha prays to Lord Shiva to reveal to her the face of the new Naagin.

According to the latest spoilers of Naagin 6, Pratha will see Prathna’s face in the brass container and get shocked that the new Shesh Naagin looks exactly like her.

What will happen when Pratha as a mother comes to know the truth about her biological daughter, Prathna’s reality?

It will be interesting to witness how Pratha and Prathna cross paths and get shocked to see they are each other’s doppelgangers in the future episodes of Naagin 6.

© Copyright tellybest.com, 2022, 2023. All Rights Reserved. Unauthorized use and/or duplication of any material from tellybest.com without written permission is strictly prohibited.
Cached Saved on: Monday 21st of November 2022 08:40:11 AMCached Disp on: Friday 9th of December 2022 04:07:03 AM