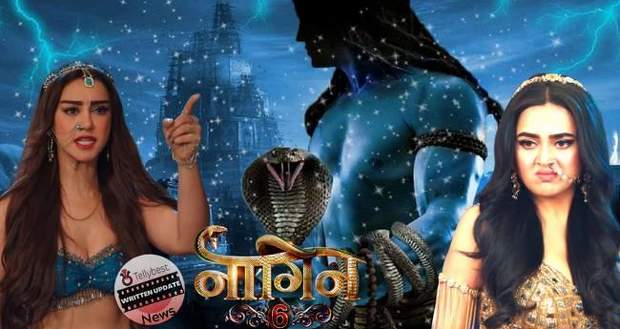 Today's Naagin 6 20th August 2022 episode starts with Pratha being stuck in the net energized by Meheck.

Pratha invokes Lord Shiva and asks him what kind of crime has she done in this life that she is being treated like this.

Suddenly, strong winds blow and Pratha comes out of the net all by herself.

She transforms herself into Shesh Naagin and takes out her anger by destroying trees and bushes.

Elsewhere, a Pundit says that this kind of stormy weather occurs under three conditions, one when Lord Vishnu wakes up from his sleep, second when Lord Shiva does the dance of destruction, and third when Shesh Naag or Shesh Naagin imbibes the Rudra avatar of Lord Shiva.

Later, Pratha visits the Professor who has a child in his hand. He says that this child is his and was left alone when his wife died.

Pratha says she is here to inform the Professor about his plan to save Bharat from the anti-nationals.

The cabinet meeting will be held this time in Kedarnath and Pratha knows that the anti-nationals working against Bharat would plant their bomb there.

Pratha says when this Shesh Naagin fights for her nation, she does not leave any stone unturned.

Rishabh is alive & on duty!

On the other hand, Rishabh is seen alive and he narrates his story to his chief about how everyone thinks he died.

He says a police officer in greedy for Rishabh’s expensive watch died in the fire while Rishabh was able to get out on time.

However, when everyone decided Rishabh was dead, Rishabh had no motivation to declare himself alive.

Meheck & Urvashi are in Kedarnath

Meanwhile, Urvashi has already teamed up with Zain and is under the secret tunnel on Kedarnath land.

Mehek instructs Reem to call Urvashi and let her know Mehek is coming to open the door of the secret tunnel.

Pratha also arrives in Kedarnath in her snake form and covers herself with a blanket so no one can see her face.

She and Rishabh stand so close to each other but so far apart.

Very soon, Rishabh’s eyes catch Pratha and he feels she is an anti-national.

When Rishabh touches her shoulder, Pratha throws snow on his face and runs away.

On the other hand, Zain tells Urvashi to check on the tent where weapons are kept while he hands Mehek the bomb to be planted in the prime minister’s tent.

Mehek walks suspiciously with her hand covering her chest but Rishabh catches her.

Mehek feels shocked when she sees Rishabh while he tells her he did not know he had a snake up his sleeve.

Meanwhile, Pratha burns the tent containing the weapons and does not even spare Urvashi.

Urvashi begs Pratha for mercy since she is Pratha's 'Maasi' but Pratha says Urvashi’s attempt is futile.

Urvashi changes her colors like a chameleon and points a knife at Pratha.

However, Pratha laughs and grabs Urvashi by her tail. Pratha says she won’t kill Urvashi but Urvashi will become the reason for her death.

Urvashi remembers how her Naagin powers were taken away by Naageshwari and if Urvashi wanted to become Naagin again, she would die.

Pratha bites Urvashi on the neck with her fang and leaves her without any aid.

Meanwhile, Rishabh points his gun at Mehek and says she is not facing Rishabh but a soldier who is on duty.

However, Mehek says Pratha was pregnant when she was sent to jail and she even delivered the baby.

She was told that her baby was born still and Pratha blamed Rishabh for it.

While Rishabh recovers from this shock, Mehek hits Rishabh with his gun knocking him unconscious.

In the upcoming story of Naagin 6 on 20th August 2022, Pratha’s anger will take a leap and she will be taking her revenge on Meheck.

So far in the story of Naagin 6, Pratha gives Meheck into the hands of Naagin ‘Vinaashini’ thinking she will defeat Meheck.

This will only create momentum for Pratha to remember the moment Mehek betrayed her strongly.

According to the latest spoiler of Naagin 6, Meheck is not only Pratha’s sister but an antinational working against Bharat.

Transforming into Shesh Naagin, Pratha will thrash Meheck black and blue, edging her near a cliff.

However, Mehek has a big secret kept away from Pratha about her baby girl.

As per the upcoming twists of Nagin 6, Mehek will lodge a knife in her chest and jump off the cliff, leaving Pratha curious and desperate to know about the whereabouts of her baby girl who is still alive!

This will be a momentous scene in the rich legacy of all Nagin seasons.

Let us see how the future episodes of Naagin 6 create a buzz inside the audience, wanting to know what awaits in Pratha’s life.

© Copyright tellybest.com, 2020, 2021. All Rights Reserved. Unauthorized use and/or duplication of any material from tellybest.com without written permission is strictly prohibited.
Cached Saved on: Friday 30th of September 2022 06:02:33 PMCached Disp on: Saturday 1st of October 2022 01:06:55 AM