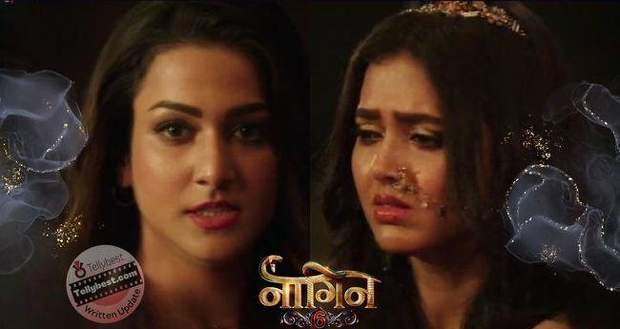 Today's Naagin 6 20th November 2022 episode starts with Prathna having a nightmare of lots of tribal people surrounding her and ultimately, snakes.

She wakes up frighteningly while Pratha asks her what she dreamt of.

Prathna answers seeing snakes in her dreams and Pratha realizes that this is an indication of 'Kala Sarpa Dosh'.

Confused Prathna asks what Kal Sarpa Dosh is Pratha says it is on people who have to repay her ancestors' debt.

Prathna glances at the anklets she wore of her great-grandmother.

After Urvashi gets a call, Prathna takes her disguise of her and lures Mr. Raichand to follow her outside.

Prathna aka Urvashi tells Rudra's father that she would like to give him a share of the Naag Mani.

On the other hand, the real Urvashi sees Mrs. Raichand talk with Patali & asks what she was going on for.

Patali tells her that Rudra's mother thought she was flirting with Mr. Raichand while Urvashi makes a disgusted face.

Later, Patali tells Urvashi she is going to sell the Naag Mani to her own people, the Kalikeya clan.

Urvashi thinks they are bad people but Patali shuts her up.

Meanwhile, Prathna feels sad seeing Rudra & Anmol together and tells Pratha about it.

Pratha asks Prathna to wait for some time because if Rudra loves her, he would come back.

On the other hand, Ritvik invites Anmol & everyone at Gujral House to come with him on an archeological tour of the ancient caves of Bharat.

Rudra's mother thinks that it will be the best spot to expose Urvashi flirting with her husband, Mr. Raichand.

Urvashi then gives everyone a protective talisman except Rudra as he does need it since he is Shesh Naagin's husband.

At Gujral House, after everyone leaves with Ritvik to a cave, Patali invites the Sardar of her Kalikeya clan and shows him the Naag Mani.

However, the Sardar gets angry & tells Patali this Naag Mani is useless without Nageshwari (Prathna's great-grandmother's anklet).

Meanwhile, Ritvik waits for Pratha & Prathna to arrive in the cave as everyone else is already present.

Rudra slides on a slippery rock but Prathna saves him and moves forward so he cannot see her face.

She changes her voice to Anmol's & asks Rudra whether he loved Prathna or not.

Rudra relives how he used to stare at Moon each day & remember Prathna but he stays silent. Inside, he knows he loved & still loves Prathna.

He gets into a raunchy mood when Urvashi's eyes turn golden and he realizes that she is not Urvashi, but Naagin.

Sanjana, Mrs. Raichand, beats Rudra's father with slippers thinking he is having an affair with Urvashi but when Prathna takes her real form, she gets scared.

Pratha appears while Prathna jokes that the best delight in the world is to witness a wife beating her husband up.

Both the Naagin mother-daughter mock Rudra's parents to remove each other's talisman if they want to get out of the cave alive.

Rudra's parents get scared when Prathna knocks on a pillar inside the cave and shake things up.

Both Pratha & Prathna transform themselves into Shesh Naagin & sting Rudra's parents as they fall dead.

Prathna goes out of the cave like a heroine until she drops on her feet, her heart suddenly seized by nervousness.

In the upcoming story of Naagin 6 on 20th November 2022, Pratha & Prathna go on their search to find the Kaaliya Nag.

So far in the story of Naagin 6, Suhasini dies at the hands of Urvashi who gets manipulated by Pratha & Prathna in disguise.

Pratha also gets to know that Ritvik is RPS' son and is here to help her.

According to the latest spoiler of Naagin 6, Kaliya Nag gets enraged at Prathna & Pratha who have woken him up from his slumber.

He charges Prathna to attack her.

Further, Anmol who is with the villains now (Urvashi & Patali) lodges a knife against Prathna's back with full force.

Pratha watches Prathna die helplessly as the villains smirk at the back.

Let us see whether Pratha is able to help her only daughter or not in future episodes of Naagin 6.

© Copyright tellybest.com, 2022, 2023. All Rights Reserved. Unauthorized use and/or duplication of any material from tellybest.com without written permission is strictly prohibited.
Cached Saved on: Tuesday 22nd of November 2022 11:57:08 PMCached Disp on: Tuesday 6th of December 2022 11:46:44 AM