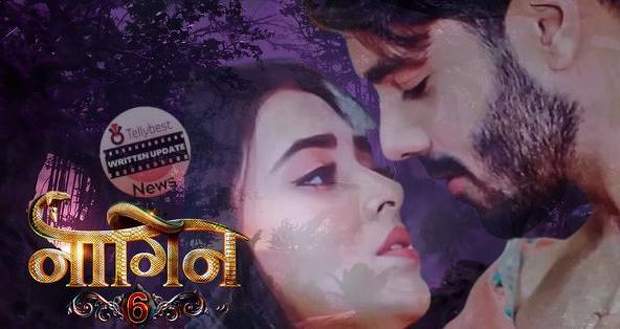 Today's Naagin 6 21st August 2022 episode starts with Meheck tying Rishabh in the chair and asking him to do her bidding.

When Rishabh refuses, Meheck says he must listen to her because she has something important to show him.

She then shows Rishabh a video clip of a baby girl and says it is his and Pratha’s daughter.

Rishabh’s eyes become red while Mehek tells him it was her all along who created a misunderstanding between him and Pratha.

Mehek then hands Rishabh a gun and says he will have to kill the minister today by becoming an anti-national from a patriotic soldier.

Rishabh to betray his nation?

Rishabh asks God what kind of internal dilemma it is that he has to choose between his daughter and his nation; both of them which he is supposed to love the most.

However, Rishabh picks up the gun in his hand and obliges Mehek’s order.

Mehek puts a ragged shawl over Rishabh’s head so he is easily spotted by Mehek’s side of the troop.

Meanwhile, Pratha searches for Mehek at the entrance of the Kedarnath corridor and says she should have been there.

Mehek comes and says she was waiting for Pratha because Rishabh is still alive.

Mehek asks Pratha to guess who she gave the job to kill Bharat’s minister and gives Pratha a hint that it is the only man Pratha ever loved in her life.

Pratha whispers Rishabh’s name and remembers why King Takshaka did not resurrect Rishabh because he never died.

Meanwhile, what Mehek doesn’t know is that Rishabh gives the rugged shawl to Inspector Vijay and asks him to take care of Pratha and his daughter while he goes to sacrifice his own life for Bharat’s sake.

Inspector Vijay says Jai Hind and wishes everyone gets a pure love relationship like Pratha and Rishabh’s and every soldier gets a patriotic, big heart like Rishabh’s.

On the other hand, Zain and Mehek converse about the exact location they will be putting the bomb so everyone can get hurt.

Rishabh is the ultimate patriot

However, Zain’s guards come with unfortunate news and inform him that Rishabh has escaped after exchanging his shawl with Inspector Vijay.

Meanwhile, Rishabh kills most of Zain’s men with his gun.

However, Mehek tells Zain to use their last tool to spread fear amongst the netizens of Bharat.

Zain lets loose Yeti on the snowy-clad footsteps of Kedarnath while Mehek says Yeti will attack everyone but not her since she has put Kerosene oil all over herself.

Men and women run here and there but Yeti steps on Reem.

She becomes unconscious while Pratha arrives on the spot and sees Yeti’s release on Kedar as Mehek’s strategy to safeguard herself.

Pratha chants ‘Om Namah Shivaya’ which creates a circle around her and Yeti which he cannot escape from.

Pratha turns into Shesh Naagin and kills Yeti on the snowy-clad Kedar, holding a 'Trishul' or a trident in her hand.

On the other hand, Rishabh catches Zain planting the bomb in the secret tunnel and shoots him on his forehead.

Zain dies on the spot while Rishabh picks up the bomb in his hand and throws it far away from the walking populace.

A blast happens in the background while Pratha’s eyes catch Rishabh and he catches her.

Both of them rush toward each other with Pratha whispering in Rishabh’s ear that Lord Shiva made their meeting happen in this holy land.

Rishabh cuddles Pratha’s quivering chin as he tells her Meheck is the anti-national and the one who betrayed both of them.

Pratha tells Rishabh she knows Mehek’s reality and asks him not to hurt her since she would be the one to slay Mehek along with her bad deeds.

Both these star-crossed lovers nudge their noses against each other and feel extreme love and warmth radiating from their bodies.

Pratha then turns into Shesh Naagin, away from Rishabh’s eyes, and goes to meet Mehek to let her know she has come to end her life.

In the upcoming story of Naagin 6 on 21st August 2022, Mehek will trick Rishabh by distracting him with her words and getting him under her custody.

So far in the story of Naagin 6, we come to know that Rishabh is alive but Pratha doesn't know this yet.

Meheck gets Rishabh under her custody and ties him up while Pratha beats Urvashi up. However, the husband and wife do not know that they are walking on the same land.

According to the latest spoiler of Nagin 6, Rishabh will somehow free himself from Meheck's hold and put his own life as a sacrifice by throwing the bomb away from Bharat's prime minister's tent.

Further, Pratha will see Rishabh and the star-crossed lovers will see each other's faces again without misunderstanding.

However, Mehek will free Yeti from his lock and order him to kill everyone excluding herself as per the upcoming twists of Nagin 6.

Let us see how Rishabh and Pratha react after crossing each other's paths again in the future episodes of Naagin 6.

© Copyright tellybest.com, 2020, 2021. All Rights Reserved. Unauthorized use and/or duplication of any material from tellybest.com without written permission is strictly prohibited.
Cached Saved on: Friday 30th of September 2022 05:31:38 PMCached Disp on: Saturday 1st of October 2022 04:53:52 PM