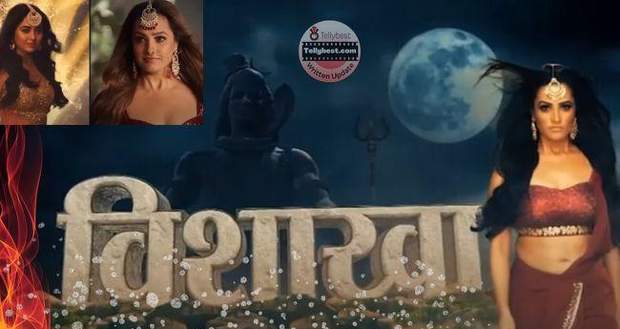 Today's Naagin 6 21st January 2023 episode starts with Raghuveer and Preeti talking to each other when Raghu shows him the papers of the kids' adoption and him also taking Preeti's name as his surname.

Preeti becomes speechless and can only stare at Raghu.

Later, Seema puts the kitchen on fire intentionally in which Raghuveer gets trapped.

Raghu coughs and rolls on the floor while Seema jumps inside and pushes him out.

She then lays on one-stop, unmoving to gain the caring care of everyone.

Everybody including Vinay, Shesha, and Prarthana bring Raghu to his sense while later, Seema starts to shout also to save her from the fire.

Raghuveer and Vinay wrap Seema in a blanket and make her escape the fire while Shesha shakes her head in disbelief at Seema's exaggerated antics.

On the sofa, Seema thanks Raghu for saving her life and says he is just like her son.

Seema thanks Vinay and him for accepting her as a part of their family.

Meanwhile, Prathna goes to the Naag Mahal and tells Shiv Ji that she is ready to increase the power of her Nine Naag Manis and will do the ritual.

She raises her arms on top of her head, doing Namaskar to the Bhole Baba as the Naagin tune plays in the background.

Elsewhere, a red-colored Naagin appears around Meheck who is almost on the verge to die.

The red Naagin is Vishaka who brings Meheck back to life by transferring her the boon of eternity that she received from Lord Shiva.

Meheck smiles and thanks her before asking about her whereabouts.

Vishaka says that she is here to help Meheck and get the Divya Payal or the magical anklet back from Prarthana.

On the other hand, Raghuveer tells Preeti in their room that he knows she will never be able to love him.

However, he asks her to be direct with him now and let him know her decision.

He drinks alcohol as he stares at the Moon while later, Vinay, his older brother advises him to just confess his feelings to Preeti.

Meanwhile, Seema gets panicked when she sees a big, red snake waiting for her at the entrance of the Gujral Mansion.

However, it is Vishaka and Seema thinks she is here to kill her.

Mehek says that if they (she and Vishaka) go inside, Prarthana and Shesha will be able to sense them.

Thus, Seema needs to bring back the "Divya Payal".

Later in the day, Vinay gets stressed out when he doesn't see or hear from Mehek anywhere.

He freaks out and says since it is Ahlawat jewelry's 25th anniversary, Meheck has to be there at any cost.

Vinay remembers Meheck always talked about getting "Mani" while Shesha under her breath mocks him and says "Foot, it is Naag Mani".

He praises Meheck and says she is his "Heera" (jewel) while Shesha mocks him again under her breath, saying "Fool, she is a Naagin".

Seema becomes goody-good with Prarthana and Prathna says she is not that stupid to believe Seema if she begins insulting Meheck out of nowhere.

However, Seema gets serious again and lets Prathna know that she will get the Divya Payal at any cost.

In the upcoming story of Naagin 6, Vishaka will be back!

So far in the story of Nagin 6, Seema cuts her ties with Meheck as Meheck has grown frail and weak after losing the ancient, magical anklet to Prarthana.

Meanwhile, Shesha has asked Prarthana to fulfill a ritual to invoke and utilize the powers of the Nine Naag Manis residing in her belly.

According to the latest spoiler of Naagin 6, Vishaka is back to take revenge on Pratha!

As per the latest gossip, Seema has called her to fight a Maha Yuddh (Grand Battle) with the Maha Sarvasrestha Shesh Naagin, Prarthana.

Let us see if Prarthana would require extra help from Shesh to defeat Vishaka in the upcoming episodes of Naagin 6.

© Copyright tellybest.com, 2022, 2023. All Rights Reserved. Unauthorized use and/or duplication of any material from tellybest.com without written permission is strictly prohibited.
Cached Saved on: Wednesday 25th of January 2023 08:58:28 AMCached Disp on: Sunday 5th of February 2023 03:38:39 AM