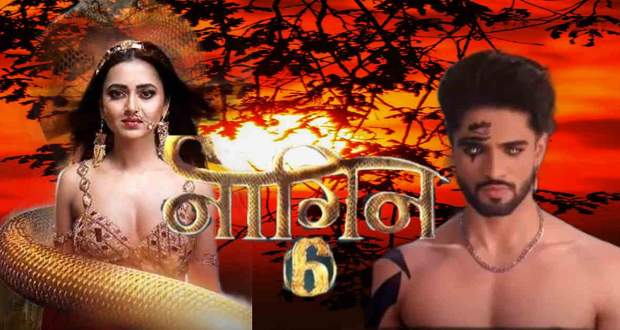 Today's Naagin 6 21st May 2022 episode starts with Mehak and Nevala fighting as he takes Chanda Ma out of the temple.

On the other hand, Rishabh threatens to leave Pratha if Rehan is proven innocent of the domestic violence case.

Seema is happy to see tensions arise in #PraRish’s relationship as she taunts Pratha for ever believing that she could defeat Seema or her empire in a jiffy.

Before leaving, Pratha promises Seema that she won’t lose Rishabh or Chanda and it is both a promise and a threat to Seema’s overflowing negativity.

Pratha arrives at the Ujjain temple to fight off Renaksh as he carries an unconscious Chanda over his shoulder.

Pratha tells Renaksh she is Shiv-Vaardani who only kills and does not lose. She lifts Renaksh up in the air before invoking Lord Shiva to give her his Shakti.

A group of tridents makes a circle around a struggling Renaksh.

He tries to come out of the burning circle as Pratha pierces his forehead by throwing a trident.

She stands there like a fierce goddess who has fulfilled her vow.

Pratha is also worried about Rishabh acting hostile toward her under Seema’s influence.

Seema tries to mock Pratha commenting that she will become homeless very soon.

Pratha retorts back and informs Seema that she has killed Renaksh, making Seema panic.

Seema is Renaksh’s mother and the news of her son dying breaks her heart.

She yells to Banno to come out in front of the Ujjain Mandir. Seeing Seema distressed about Renaksh’s whereabouts, Banno smells Renaksh’s dead body from afar.

Seema cries as Renaksh has died. However, Banno being Renaksh’s father pours the snake’s poison into his throat, making him come alive slowly.

Seema hugs Renaksh when he opens his eyes but gives him a good slap for getting defeated by Shesh Naagin.

Meanwhile, Pratha counsels Samaira to be stronger and fight for her right as she is a survivor of domestic violence.

Rehan gets beaten up by Inspector Vijay as Rishabh shows up.

Rehan lies to Rishabh that Hina Khanna, AKA Mehak, has bribed Vijay to arrest him.

When Rishabh gets home, he tells Mehak to get out but Pratha comes in between.

Rishabh gets perplexed when Anya and Kshitija support Pratha in her fight to bring justice to Samaira as both the sisters are well aware of Rehan’s affairs.

The next day Rehan comes back home from the jail with Rishabh’s support as Radha’s health declines.

Rehan, Vehan, Ritesh, and Reem decide to team up to kick Pratha out of the house as soon as possible. However, Rehan suggests that they should party first.

On the other hand, Pratha decides to follow Rehan to the party to collect evidence of his immoral and lusty actions for Rishabh to see.

As Pratha begins to leave, her foot gets hurt by the table. Rishabh forgets his anger and puts a bandage over Pratha’s worship-worthy feet.

For a moment, they both forget that they are fighting.

However, Pratha candidly tells Rishabh she will side with the truth even if it means going against Rishabh’s family.

Pratha to collect evidence against Rehan

At the party, Ritesh and Reem have a squabble.

Rehan ends up liking a girl who has just walked into the party.

Transforming herself into Shesh Naagin, Pratha follows a perverted Rehan as he asks the hot girl to follow him inside the room.

In the upcoming story of Naagin Season 6 on 21st May 2022, Pratha will be fighting Rainaksh, the Nevala, to keep the Amrit Kalash safe from his sinister hands.

So far in the story of Naagin 6, Rainaksh kidnaps Chanda to know more details about the exact location of the Amrit Kalash.

However, Pratha will be able to track Rainaksh and stop him before he kills Chanda Ma.

A duel will occur between the Sarvasrestha Naagin and Icchadari Nevali as both of them invoke their special powers to fight each other.

As per the latest promo of Naagin 6, Rainaksh will be provoking Pratha to fight with him.

A trident will appear magically in Pratha's hand that is going to be Shesh Naagin's weapon to finish Rainaksh.

Pratha is sure to defeat Rainaksh as the time has come that Shesh Naagin destroys the clan of Maha Asuras who have troubled the human populace time and again with their greed and deceit.

Let us see how Pratha kills Rainaksh and saves the Amrit Kalash from falling into the hands of the Asura clan.