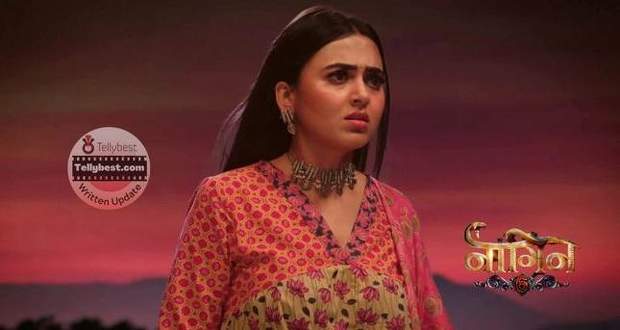 Today's Naagin 6 22nd January 2023 episode starts with Meheck trying to diffuse the sudden fight that breaks out between Seema & Vishaka.

Seema tells them that they will find the "Divya Payal" in the Naag Mahal since it belongs to Nageshwari, Prarthana's great-grandmother.

Meheck and Vishaka leave while the party to celebrate Ahlawat jewelry 25th celebration begins and Shesha notices how keenly Raghuveer looks at Prathna but not directly.

Shesha teases him that he is married and that he doesn't have to glance at Prathna secretly.

Meanwhile, Tina, the youngest of the foster siblings of Preeti bumps into Seema who scares the little girl profusely.

Seeing Tina cry, the other kids decide to teach Seema a lesson who is drinking away her sorrows and anxieties at the drinking bar at the party.

The kids come to her again and she calls them a source of mischief.

However, the boy who is a little younger than Tina offers Seema a rose and when she accepts it, the water gets splashed on her face.

The kids run away while Seema grumbles to herself and orders the bar person to make another drink.

On the other hand, Meheck and Vishaka reach the Naag Mahal but are not able to enter it.

When Meheck suggests that they let Seema fetch the "Divya Payal" for them, Vishaka says she will not tolerate that old woman anymore.

However, after Mehek's pleadings, Vishaka gets ready and prepares herself to act docile in front of Seema, instead of snapping her neck into two.

Raghuveer is a Naag too?

At the party, the kids ask Raghuveer, Preeti, & all the other guests to wear a blindfold and find their respective partners.

Shesha happily volunteers to be the judge of the whole show while Vinay wears the blindfold too and misses Meheck.

Suddenly, Raghuveer who is blindfolded too freezes time and brings Prarthana to himself, slowly.

He unfreezes time and acts stunned that Preeti was able to find him.

On the other hand, Seema is languishing outside with a bottle of cocktail in her hand when she sees Mehek and Vishaka approach her.

After hearing their woe of not being able to enter the Naag Mahal, Seema chuckles arrogantly and says these Naagins are useless and only she can bring it back.

Vishaka glares but keeps her temper at bay, addressing Seema as "Seema Ji" who cannot even walk properly as she is drunk.

Seema goes to the Naag Mahal and gets the Divya Payal and gives it to Meheck.

However, Vishaka shouts at Seema for bringing a fake one as it gives a side effect to Meheck when she tries to wear it.

Inside the party, Raghuveer's old friend, Prajita comes to meet him and calls him "Raggs".

With folded hands kept in front of her belly, Prathna sees how lovingly Raghuveer embraces her in a hug while Shesha teases her that she is jealous.

Prathna denies it and walks away, murmuring that boys like Raghuveer can only lie and they just want to keep a double face and tread like this throughout their lives.

Raghuveer notices Preeti leaving and stops her. With jealousy already at a peak, Preeti tells Raghu to enjoy his time with "Prajita" and leaves with a sweet, mocking smile.

In their bedroom, Prarthana fears that she has indeed fallen in love with Raghuveer and sees Pratha come to her in form of spirit.

Pratha advises Prathna to remain in the feeling and come to terms with it.

Meanwhile, Vishaka takes it upon herself to find Divya Payal instead of Seema.

On the other hand, Raghuveer finds Prarthana in their room who is touching the heights of jealousy and doesn't bother to look at him.

Raghuveer says that Prajita is only his friend and nothing more but Prathna keeps on blaming him for loving her and lying to Prathna.

"I love you, Preeti"

Raghuveer gets angry for the first time and tells Preeti clearly that he loves her and nobody else.

Prarthana's body shivers as Raghuveer confesses powerfully that he loves her and she has become a lingering thought all day for him.

Both of them hug each other and Prathna asks him if he will accept her even if she killed somebody to save her family.

Raghu says that he doesn't care about her past.

With a heavy heart, Prathna tells Shesha that she will give up her Naagin powers and offer those nine naag manis to Shesha as she wants to live a life of a wife who is fully devoted to her husband.

Later, Prathna goes to confess her feelings to Raghuveer too but she sees him hugging Prajita and tells her that he is just playing with Preeti to get what his Bhabhi, Meheck wants.

Prathna gets so angry when she sees Raghuveer with Meheck, telling her that Preeti is totally in love with him now.

Prathna imagines turning into Naagin and killing Raghuveer on the spot but instead, she breaks a branch as she observes the traitor and the traitress.

Later, Vishaka hears Prathna say that she has kept the Divya Payal in the storeroom but it is a ruse to catch her.

Vishaka gets annoyed when a net falls on her and Prathna emerges, asking Vishaka who she is and why she is there.

Announcing that the Maha Sarvasrestha Shesh Naagin has arrived, Vishaka and her fight as Vishaka lets out her red fang and Prathna escapes it.

In the upcoming story of Naagin 6, Prarthana reveals that she wants to wed Raghuveer and fulfill her wife's role in this lifetime.

So far in the story of Nagin 6, Mehek comes alive after Vishaka gives her the boon of remaining immortal.

According to the latest spoiler of Naagin 6, Vishaka and Prathna will come face-to-face!

Vishaka wants the Divya Payal for Meheck and will fight off Prarthana.

As per the latest gossip of Naagin 6, Prarthana will also have to save her love, her friend, Shesha, from the lethal trio of Meheck, Seema, & Vishaka to be fought off!

Let us see whether our Maha Sarvasrestha Shesh Naagin is able to defeat Vishaka or not in the future episodes of Naagin 6.