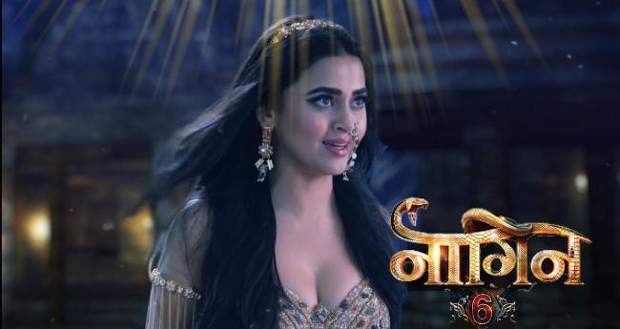 However, Pratha is already present at the party to record Rehan’s actions.

As Rehan admits beating Samaira to Vihaan, Pratha records it to show his true colours to Rishabh.

Rishabh is left stunned to see Rehan speak like this in the recording.

An angry Rishabh slaps Rehan as Pratha calls Ambika to tell them what else Rehan did to her in the room.

However, Ambika turns the tables as she lies about Pratha bribing her to speak against Rehan.

Rishabh kicks Pratha out of the Gujral House

Without letting Pratha respond, Rishabh kicks her out of the house as Rehan smirks.

As Pratha is leaving the Gujral House, Seema mocks her tears and announces that Pratha will soon hear about Rishabh’s death.

Pratha’s mind replays back all the moments she has spent with Rishabh as she cries near the bus depot.

Rishabh throws furniture around in his room as his mind also recalls #PraRish precious moments together.

He smashes their wedding photo on the floor, yelling Pratha’s name.

Pratha sees Shiv Ji’s photograph near the bus stand as she asks him why all of this is happening.

Just then, Ambika arrives and apologizes to Pratha as Rehan had threatened her parents if she did not lie.

Ambika informs Pratha that it was Gujral Family’s teamwork to kick Pratha out of the house.

An angry Pratha swears to finally showcase her lioness side to Seema and her crime partners.

The next morning, a drunk Rishabh breaks a glass in his hand.

Reem bandages his hurt hand with her saree. However, Rishabh tells Reem to stay away as he is still married to Pratha and will always remain faithful to her.

Renaksh cries crocodile tears as he informs Rishabh that Pratha hurt him and also kidnapped Chanda.

Seema pretends to be scared of Pratha as Rishabh urges that he will bring Chanda Ma back from the old Ujjain Temple.

Later, Seema mixes poison into Rishabh’s glass of milk which will kill him after six hours as soon as he enters the "Naag Rekha" drawn by Pratha for Chanda's protection.

As Rishabh gets ready to meet Chanda Ma, Seema demands that she go with Rishabh too.

On the other hand, a storm approaches the Ujjain Temple as Mehak informs Pratha they only have four hours left to find the Amrit Kalash.

Chanda tells Pratha that she could only hear Pratha’s mother hiding the Amrit Kalash in Bharat’s Nabi/Center.

Soon, Pratha realizes that Bharat Nabi means underground of this Ujjain Temple only.

A bright white light appears in the middle of Shiva Linga as Pratha invokes Shiva’s grace to show her the location of the Kalash.

Pratha discovers the spot under which Amrit Kalash is located and realizes she will have to go to Paatal Lok to retrieve it.

A hesitant Mehak readies Pratha for Taandav as she is aware of the shaking it would bring to the Earth.

Shesh Naagin begins the Taandav dance with each movement of hers apt and measured.

The ground shakes under Mehak and Chanda’s feet as a pillar drops over them.

Pratha sees the opening of the Pataal Lok as Mehak urges her to go and come back with the Amrit Kalash quickly without worrying about her or Chanda.

On the other hand, Rishabh starts to get dizzy as he drives the car with Seema and Renaksh carpooling.

Seema tells Rishabh to be careful with the driving as a truck passes by them swiftly.

Rishabh nods as they all approach the Ujjain Temple.

In the upcoming story of Naagin Season 6 on 22nd May 2022, Pratha will be competing against Seema to unearth the Amrit Kalash that lies in Pataal Lok just beneath the Ujjain Temple.

So far in the story of Naagin 6, Pratha kills Renaksh. However, due to Banno's aid, he comes alive.

Seema discourages Renaksh to come in front of Pratha now because she does not want Shesh Naagin to know that Renaksh is her son.

As per the latest spoilers of Naagin 6, Pratha along with Mehak and Chanda Ma's help will craft a map together that will tell them the exact location of the Amrit Kalash.

Pratha is racing with time as she has to reach the sanctified Amrit Kalash before Seema reaches it and floods the whole of Bharat with poison.

Let us see how Pratha balances her role as the Sarvasrestha Naagin and as the daughter-in-law of the Gujral Household.