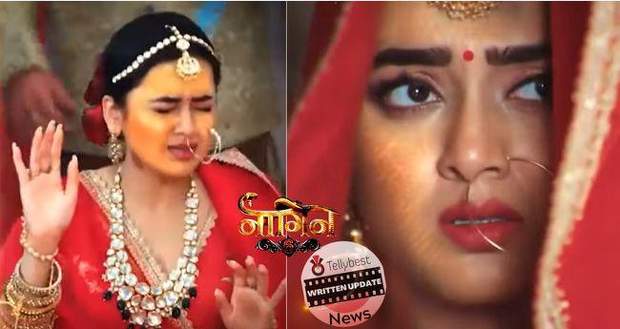 Today's Naagin 6 22nd October 2022 episode starts with Prathna keeping an eye on Rudra as he gets ready for the event.

Prathna takes her snake form behind Rudra, however, she has to hide as Rudra’s friend enters the room.

His friend asks him if he wants to marry Anmol while Prathna vows to finish him during his marriage.

Prathna looks into Rudra’s suitcase, hoping to get a reason why he killed her father Jeet but Rudra enters the room just then.

Downstairs, Prathna is still in Anmol's disguise when Rishabh hugs her.

Prathna feels a certain love in Rishabh's embrace as if her father is hugging her.

However, Prathna cannot get over the fact that Rishabh is Jeet's killer, so it doesn't matter even if he is her biological parent.

Afterward, the Mehendi artist calls Anmol (Prathna) while Prathna grimaces when the mehndi artist writes Rudra’s name on her palm.

Anmol’s friends get confused to see her at two places at the same time while Anmol asks them if they are drunk.

Anmol gets saved by Prathna

After the mehndi, Anmol starts to dance as the center of attention when Prathna sees the chandelier fall on her.

Prathna pushes Anmol off and gets her arm hit by the chandelier instead.

Pratha screams for Prathna & takes her upstairs for first-aid.

Pratha reveals she is Prathna's Mother

She tells Pratha she has no one to take care of her. Pratha’s heart burns and she finally confesses that she is her mother & Rishabh is her father.

Pratha tells Prathna she got swapped in childhood with Anmol who is Jeet’s daughter.

On the other hand, Rudra finally tells Anmol he loves someone else while she takes a gun and points it at her forehead.

She warns Rudra to marry her, threatening to pull the trigger and Rudra forcefully has to say yes.

Later, Anmol reveals that this gun is fake but her love for Rudra is real and if there is any girl in Rudra’s life, Anmol will finish her off.

Meanwhile, Rishabh takes Rudra into his study to discuss the Vasuki Shesh Mandir.

Rishabh tells Rudra there are five people who are against this country, one of them being Zain, who Rishabh tried to kill but got saved somehow.

On the other hand, Rudra’s father, Ranjeet, is one of the five people who is working with Zain to destroy Bharat.

Later, Prathna asks Anmol at her bachelorette party whether she feels Rudra truly loves her or not.

However, Anmol quickly dismisses the topic.

The next day, it is Rudra & Anmol’s Haldi ceremony where Anmol asks Prathna to be her sister and apply Haldi on her face.

In the kitchen, Patali mixes some powder in the Haldi mix that will turn Anmol's skin red after Prathna applies it.

However, Prathna's feet slip after she applies the Haldi and Rudra saves her. Anmol's friends taunt Rudra AKA their Jiju for having his eyes focused on Prathna when Anmol is going to be his wife.

Meanwhile, Patali & Urvashi feel confused when their plan does not work out and Pratha informs them she exchanged the bottle with a Chandan paste.

Pratha threatens to kill both of them and never ever test a mother's love for her kids.

In the upcoming story of Naagin 6 on 22nd October 2022, Prathna will take Anmol's place as Rudra's wife in the 'mandap'.

So far in the story of Naagin 6, Rudra and Anmol's marriage gets fixed while Prathna thinks of many different ways to get her 'inteqaam' & punish both Rishabh & Rudra.

As per the latest spoiler of Naagin 6, Prathna will enter the Gujral House as Anmol.

However, her disguise will fail as suddenly she hears 'Nagin Been' & her skin turns golden yellow!

As per the upcoming twist of Naagin 6, Prathna's 'ghoongat' or red veil will drop off, exposing her to the prying eyes at the wedding.

How will Pratha react once she gets to know that Prathna is the new Shesh Naagin & has taken Anmol's place?

Is this the same history happening as in the case of Rishabh & Pratha when they got married?

Let us see how this 'Shaadi Special' drama takes place in future episodes of Naagin 6.

© Copyright tellybest.com, 2022, 2023. All Rights Reserved. Unauthorized use and/or duplication of any material from tellybest.com without written permission is strictly prohibited.
Cached Saved on: Monday 21st of November 2022 06:36:18 AMCached Disp on: Friday 9th of December 2022 03:42:43 AM