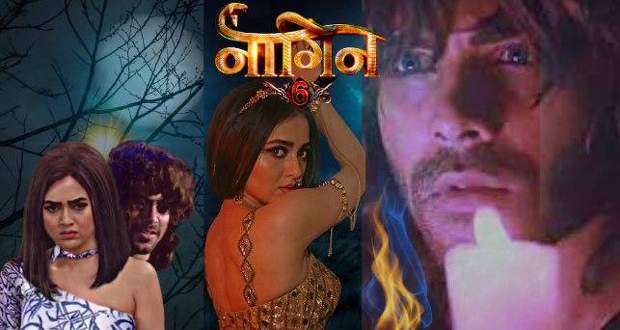 Today's Naagin 6 23rd July 2022 episode starts with Rishabh’s chief informing him about an inauguration party to be held behind the black mountains where the Naag Mahal stands.

When Pratha hears this piece of information, she gets confused while Rajesh Pratap Singh advises Pratha to simply kill Rishabh soon and not wait further.

Divya asks Rajesh why he is pressurizing Pratha again and again when alone.

She suspects Rajesh has feelings for Pratha.

Meanwhile, Shakti goes mad second by second with thoughts of Pratha devouring him.

He thinks Pratha’s name to be Deepika as told by Urvashi and starts to scratch the wall to come out of the storeroom.

On the other hand, before Rishabh leaves with others for the inauguration, he finds medical reports of Shakti dating back to the year 2020.

Everyone waits for Pratha and when she finally comes, Rishabh can’t seem to divert his eyes from her.

She wears a glittery grey dress, the colour that he thought suited Pratha so much.

Rishabh snaps out of his reverie when Kiara taunts Mehek about Rishabh indulging in his daydream a little too much and staring for long at Kiara.

Nearby villagers stop Rishabh’s car in between the way to the Naag Mahal, standing with sticks, and asking Rishabh to return back.

They won’t let anyone destroy the Naag Mahal but Rishabh continues driving the car, not believing in their stories.

Rishabh greets Vishal, the person who wants to destroy the Naag Mahal and build a tourist attraction instead.

Meanwhile, Urvashi searches for Pratha’s Nani’s anklets but she doesn’t see anything and only Pratha is able to see them.

It feels nostalgic for Mehek, Pratha, and Urvashi to return to the place they spent their entire childhood in.

However, Mehek is just a bogus Shesh Naagin who is not interesting in saving her ancient lineage.

A snake (Naag) appears but one of the officials throws alcohol and lights a fire around him.

Urvashi asks Mehek to do something but before Mehek does something, Kiara quickly picks up the snake in her head and carefully puts it outside the fire.

The Naag secretly nods at Pratha for saving his life while everyone claps for Kiara’s bravery.

A moment later, all the Naag & Naagins gather together and invoke Shesh Naag to help them.

Doing his duty, Shesh Naag reminds Pratha of her power and says no one can destroy the Naag Mahal till she is alive.

Pratha nods and goes inside the Naag Mahal to stop Rishabh from cutting the ribbon and for the inauguration to happen officially.

Pratha blows strong winds inside the Naag Mahal that stops Rishabh from cutting the ribbon as a cloud of dust settles over everyone’s eyes.

However, Mehek removes the dust with her powers by blowing wind.

However, all the snakes living inside the Naag Mahal appear and jump in defense of Rishabh.

Rishabh cancels the deal to destroy the Naag Mahal

Rishabh falls down to the ground while Mr. Vishal hurries to kill all the snakes.

However, Rishabh is tender-hearted and cancels the deal since he does not want to replace all the snakes from their home.

Mehek hugs Rishabh publicly and says she is proud of him while Pratha stands and smiles at Rishabh’s wise decision.

In the car, Rajesh taunts Pratha again for not killing Rishabh.

After he drops Divya and Pratha at the Gujral Mansion, he goes to meet a man who says Rajesh has to marry someone if he wants to get his dead wife’s ancestral land.

In the night, Rajesh taunts Pratha again, saying it seems like she is thinking about Rishabh since she can’t kill him.

Pratha makes a face at Rajesh but he tells her he needs to marry her so he can receive his dead wife’s ancestral property.

Rajesh informs Pratha that even the Mantras chanted during their fake marriage, including the Pandit, would be bogus.

To clear his intentions more, Rajesh says Pratha need not think he is in love with her or something.

All he wants is the land and this way, Pratha can kill Rishabh because nobody will suspect her since she will be the bride of the day.

In the upcoming story of Naagin 6 on 23rd July 2022, Pratha will be eyeing Rishabh from a distance because she wants to kill him.

So far in the story of Naagin 6, Rajesh Singh Pratap has asked Pratha time to time again if she has forgotten why she is here in the Gujral Mansion.

Pratha gets frustrated and finally decides not to be soft with Rishabh the next target and craft a plan to kill him.

According to the latest spoiler of Naagin 6, Pratha's aim is to kill Rishabh.

However, instead of Rishabh, she will find herself alone in the company of Shakti who is madly lusting after Pratha as Kiara Sharma.

Let us see how Pratha protects herself from Shakti's lustful eyes and realizes Rishabh's truth and Shakti's horrendous past in the future episodes of Naagin 6.