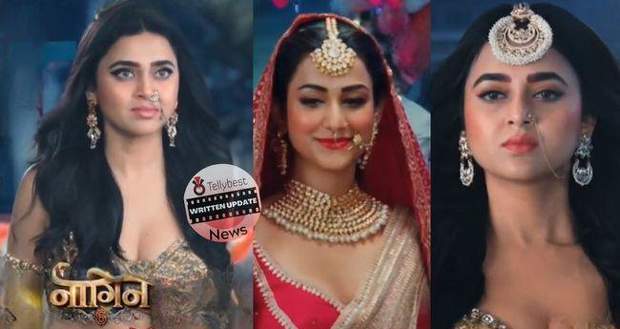 Meanwhile, Rudra is confused as to how to confess to Prathna that he loves her, not Anmol.

However, he decides to tell his parents about it who don’t support his decision to cancel the marriage at the last moment.

Upstairs, Anmol calls out for Prathna when she sees her wedding ka joda burning on the floor.

Urvashi blames it on Prathna but Pratha knows it is Urvashi & Patali’s doing.

Afterward, Pratha warns both of them not to mess with any of her daughter’s life while Patali says she is not scared of Pratha.

After Pratha leaves, Urvashi pities her as Pratha is not aware that she is ex-Shesh Naagin.

In the mandap, Anmol enters wearing Pratha’s wedding attire while Rudra wears a dead expression on his face.

He glances at Prathna and replays all those moments spent in the office where he felt a longing for her.

Prathna swaps places with Anmol after knocking her unconscious

Both Anmol & Rudra get ready for the varmala ceremony when suddenly the light goes off.

Taking the form of Rudra, Prathna gives a liquid to Anmol that makes her unconscious.

Before the lights come in, Prathna sits instead of Anmol in the mandap.

However, soon enough a woozy Anmol shows up and calls Pratha’s name.

Rishabh gets shocked along with everyone while Pratha thinks who could it be sitting instead of Anmol?

A strong wind pushes off Prathna’s ghungat who lowly tells everyone she sat there because Anmol wasn’t there.

Just like Anmol saved Prathna’s reputation when her fiancé ran away, Prathna says she tried to do the same.

However, Pratha angrily slaps her, stating she changed her daughter’s (Anmol) life in one snap.

Anmol’s friend then tells everyone that Rudra is in love with Pratha.

Anmol looks at her friend in disbelief and tells Rishabh this is not the case whereas Pratha checks the CCTV footage.

In the footage, it is Rudra who can be seen giving the water to Anmol after which she faints.

Rishabh then asks Rudra if he truly loves Pratha or not along with Anmol who urges him to deny this claim.

Rudra confesses he is in love with Prathna

However, Rudra finally confesses that he loves Prathna.

Prathna gets shocked while Rishabh tries to console a hurt Anmol, saying what is done cannot be undone.

Anmol feels betrayed by Prathna as Rishabh is supporting a girl who snatched her childhood love away from her.

A hurt Rishabh then tells Prathna to treat him as her father because Kanyadaan is still left.

Prathna hesitantly calls Rishabh 'Papa' while Pratha smells something fishy happening for sure.

Later, Anmol goes missing and everyone finds her on the terrace, ready to jump off and sacrifice her life.

A crying Anmol states for whom and what she lives when suddenly her feet slip off.

Fortunately, Rishabh grabs her hand just in time and lets her know, if she releases his hand, he will jump off too.

Patali laughs evilly and asks Urvashi to give her a high-five (Aye, Patali, De Taali).

In a jiffy, Anmol's hand slips and she falls down while Prathna freezes time and saves Anmol with her Naagin tail.

She then unfreezes everyone and Pratha notices the golden snake hiding behind a tree.

In the upcoming story of Naagin 6 on 23rd October 2022, Prathna & Pratha will come to a crossroads.

So far in the story of Naagin 6, Anmol threatens Rudra to marry her at gunpoint.

On the other hand, Prathna decides to stall the killing of Rishabh & Rudra since they can help her reach the other anti-nationals working against Bharat.

As per the latest spoiler of Naagin 6, Anmol will jump off the balcony after her friends reveal that Rudra is not in love with her but with Prathna!

However, it is not Anmol but Prathna who doesn't die as she takes her Naagin form.

When Pratha gets to know this, she angrily asks Prathna (the new Shesh Naagin) the purpose of her coming to Gujral Mansion.

Let us see how this tale of generational serpent queens unfolds in future episodes of Naagin 6.

To get to know more, download Naagin season 6 episode 74 or all episodes or watch the online full-show episode 74 of Naagin 6, go to the Voot app.

© Copyright tellybest.com, 2022, 2023. All Rights Reserved. Unauthorized use and/or duplication of any material from tellybest.com without written permission is strictly prohibited.
Cached Saved on: Monday 21st of November 2022 01:34:37 AMCached Disp on: Saturday 10th of December 2022 03:34:05 PM